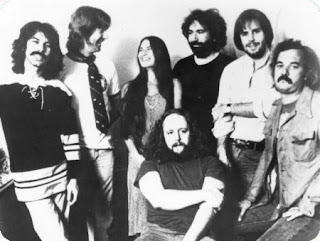 In an exclusive report today, Deadline's Mike Fleming spilled the beans on some interesting rumblings when it comes to the Grateful Dead's archives. After being granted access to the Dead catalog, top Hollywood agency ICM is looking to package a feature film build around the band's music. This wouldn't be a film about the Dead, but a fictional narrative set in the late 60s/early 70s built around their songs, a la the Beatles and the 2007 Evan Rachel Wood vehicle Across the Universe. Motion Picture literary agent Bruce Kaufman is spearheading the project on the ICM side and is consulting with band archivist David Lemieux.
Let's be clear--absolutely nothing about this project has been set, not a producer, writer or studio. All this really means is that ICM is actively pitching this idea to their feature writing clients to see if any of them have a good "take" on it. If someone did, the next step would be approaching a producer. And if the producer liked it they'd take it to a studio. And then, and probably only then, would a script be written. So while this whole thing is a bit pie in the sky at this point, it's something to keep an eye on.
And hey, if any of you out there have a Grateful Dead musical you wrote 15 years ago that's sitting in a drawer, you might as well register that shit with the WGA and send it to ICM!
Posted by change100 at 4:20 PM

This sounds like a terrible idea. They should release the damn Sunshine Daydream movie already...Veneta'72 would be awesome on the big screan.