Alpine Valley #2: Gotta Get Out of This Maze

I ate too much acid and Phish scared the shit out of me.

There you have it. My 13 word review of the second night at Alpine Valley. I fully can't describe my experiences from the evening without giving you the straight dope... I ate too much acid, Phish scared the bejesus out of me when I tumbled down the rabbit hole and saw aliens, nearly got mauled by wildebeest, then dragged me through the most murky corners cosmos, before my schwasted ass was dumped in the cornfields behind Alpine Valley. That's when the band found me and rescued me.

I ate too much acid and got lost during a perturbing and confusing space-ambient Fee jam, in which I had no idea what they were playing, nor did I figure out what the hell was going on at the time. I got wicked auditory hallucinations during Meat, when the background vocals nearly drove me mentally insane.

I ate too much acid and got sucked down multiple rabbit holes (holes within holes within holes) and had no clue where the hell I was floating around for most of the first set, which included a mini-meltdown on Twitter.

I ate too much acid. Puddles and social media don't mix. Ever. How do you explain the walls of reality melting in 140 characters or less?

Despite the fact I ate too much acid, the first set highlights included bust outs like the fourth Vevet Underground cover in four days... Lonesome Cowboy Bill, the rare 2.0 tune A Song I Heard the Ocean Sing, and an even rarer corn-funk'd up version of Access Me. Oh, I almost forgot about the keytar returned during Frankenstein. 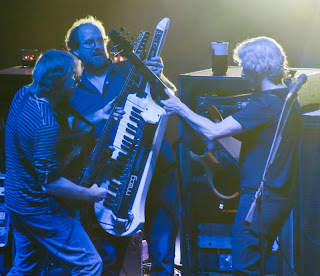 Video courtesy of Dave Vann © Phish 2012
I ate too much acid and was very happy no one talked to me at setbreak because I would have just babbled nonsensical words, jumbled phrases, and wounded animal-like noises.

The second set was anchored by a pair of monster covers... Talking Heads Crosseyed and Painless and Zeppelin's No Quarter. Man, I ate too much acid and experienced such a vivid flashback during the segue between Crosseyed > No Q, that it made me wonder if flashbacks were mini-leaps through time and space. Every time you had a flashback, you actual became a time traveler.

I ate too much acide and thought I peaked out during Light, but I was just being toyed with. I forgot that I ate too much acid, and tumbled down yet another rabbit hole. If things weren't spooky enough on a head full of liquid sunshine, the boys dragged me trough the deepest and most deviant corners of my mind in search of a hideous beast, otherwise known as Ghost. Or was it a grey alien? Whatever it was, that ugly beast lurking around the shadows took a swipe at me and nearly clawed me to death.

The second set highlight was when I got to surf wave after wave after wave of infectious crowd energy during the tsunami created by the 46 Days jam. Too bad that was the last uber-fun part of the show.

I got completely mugged and beaten down with a misplaced Heavy Things > Joy, but even though I ate waaay to much acid, I was totally let down by the weak sauce song selection. Yep, I wasn't the only one bummed out about how the second set ended. Not even an uppity Julius could inject enough life back into the audience.

Meatstick was a bizarre way to end the scorching Deer Creek > Alpine Valley run. Trey fucked up the Meatstick dance on purpose in order to pull a couple of hot Phishy chicks on stage and even one shirtless frat boy who looked waaaay to gaaaaay for Trey. The band jammed out the rest of Meaststick while the Phishy chicks shook their asses for 30,000+ phans. Maybe I just ate too much acid, but when did a Phish show turn into a Girltalk concert? Peculiar, indeed.

Sometimes, you just have to surrender to the flow, and get your brain fried and face melted by liquid sunshine. It's even one thousand times better when you do it at a Phish show.

* * * *
By the way, here's my recap from the previous night... Alpine Valley #1: Float With the Flock. And don't forget about the Deer Creek write-ups... Deer Creek #1: Heat Wave Hijinks and Deer Creek #2: Master Blaster.

You can also read my other summer tour recaps here.

If you're a fan of Mad Men, you can check out my take on Roger Sterling's first acid trip... Roger in the Sky With Diamonds.
Posted by Pauly at 4:20 PM

I would say awesome, but I been there too many times to know there is nothing awesome about tripping too hard. I Took a ten spot@ the GD in Buffalo in 1990. Next thing you know I was resting comfortably under our VW bus

That Buffalo show was my first, what a great time.

Doc, were we at the same show?

1st set started out pretty good...hell, there were good tunes played. BUT, the FOH mix SUCKED (Trey's voice was shrill and the guitar HURT), the crowd sucked, and the second set sucked. BAD. It was funny--during Fee Trey didn't even need the megaphone as the "normal" mic for his vocals sounded terrible--no mid-end, too compressed, and the most awful and piercing highs I have heard at a Phish show. If it was Neil Young and Crazy Horse it would have been appropriate but for Phish...who has about the best sound system there is...it was completely unacceptable.

Of course there were a few highlights--I loved Maze, Fee, SSP, Lonesome Cowboy, Light, Coil, and a few others. I hate Zep so I eagerly waited for No Quad to end. Joy was like forcing 6mg Xanax onto the crowd. Julius ripped but was short.

When Meatstick started I groaned, grabbed my shit and walked out. They played well but were not even trying. My 67th show and it was definitely in the bottom 3 shows I've ever seen without a doubt.

BTW, I saw NOTHING being sold in the lot--and I LOOKED. Just drunken fratboys and spun-out wooks. It will be my last Alpine show I think--that's how disappointed I was. Should have trusted my gut and did the DC/1st Alpine show. Hopefully the sound was dialed in better the first night.

Of course Phish's WORST show tops most band's BEST...but Leftover Salmon on the 3rd was WAAAY better--and 15 bucks to boot double-billed with moe!

I hope that you are enjoying JB and have fun at SPAC...wish I was going!