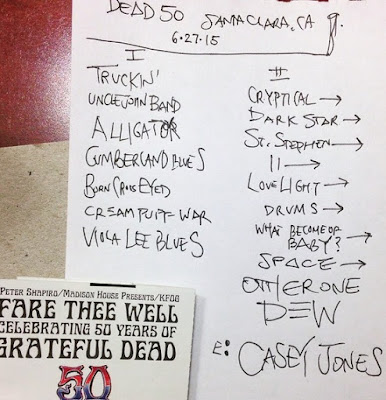 I saw the first flash of tie-dye at LAX. My flight to San Jose on Friday night was sprinkled with Deadheads. Johnnie Salami picked me up, we hit up a local San Jose dispensary, and scored  Phantom Cookies and The White. Roamed around Walmart late night to load up on supplies for the lot. My girlfriend had her birthday the night before and flew in from LA on Saturday morning, so we were celebrating her birthday weekend with Dead50. We headed to the lots soon as they opened. We had a parking pass but it wasn't the stadium lot and looked like we parked in front of Hooli or Aviato in a tech office park. Rent-a-cops wouldn't let us party in the lot and directed us to the Blue lots. We dragged the cooler and camp chairs to Blue and set up shop. Found the Kentucky crew and they humored my girlfriend's cinnamon-flavored whiskey. A mini-shakedown popped up and for a stadium show, the lot scene was kinda weak. Lot of aimless wandering by everyone  seeking mood and mind enhancing substances, but the lot was dry except for cheap weed, edibles, and extra tickets. Even the molly-heads were parched with the molly cartel printing money at Electric Forrest. I had a pipe dream that the last-ever manufactured batches of Owsley's white lightning would come out of a vault somewhere and flood the lot for one last time at Dead50. Nope. Everyone was on their own. Saw wookette slinging foot-long joints for $15. Seemed like every fifth person in Shakedown had an extra ticket they couldn't get rid of. Even GA floors were going for $50. Wook-heavy crowd. Like hard-core Alpha Wooks seeing civilization (south of Humboldt/Mendocino Counties) and descending from ganja plantations for the first time in twenty years. "Why is everyone staring at their palms?"

Tours were always about the "hurry up and wait" variety. Figured the lines to get in would be massive. You only got a patdown if you set off a metal detector. Everyone got a complimentary rose at the entrance. Finding our seats were a clusterfuck. We finally met up with Senor who hooked us up with tickets. Poor crowd control. The ushers were overwhelmed. The inmates were running the asylum from the get go. Forgot how massive stadium shows were, especially with spun-out hippies taking up every possible space to dance. The band started tuning up and we got to our seats seconds before Truckin' kicked off. I went in with minimal expectations because the Grateful Dead were notoriously famous for blowing/choking their biggest shows (e.g. Monterrey Pop, Woodstock, any NYE gig, etc.). Since Jerry died, any incarnation of Phil and Friends, Ratdog, Furthur, Other Ones always had the appropriate vibe, but musically it was hit or miss. I figured they'd shake off the rust and nerves on Saturday and bring the heat on Sunday.

Truckin' opener was fitting on a personal level. First-time I ever heard the Dead was Truckin' on classic rock radio in NYC in early 80s. When I was 18 during my first year of college, a group of us on my college dorm were obsessed with Uncle's John's Band blasting it at all hours. Two songs in and the memory flashbacks were intense... random stuff I had not thought about in decades. Ah, the power of music jogging the memory banks. The night before, I saw the leaked setlist on Reddit. By the third song, my girlfriend confirmed the leaked setlist was 3 for 3. Too bad I didn't bet on it. Felt the band took it up a notch on the energy level with Alligator > Cumberland Blues. First time they really opened up a jam. When I couldn't score anything in Shakedown, I relied on my own personal stash. Everything kicked in during Cumberland. Went way back in time with Born-Cross Eyed... wondered how many in attendance caught the original acid tests? The Illuminati approved of Trey singing on Cream Puff War. I'm hoping that one of the songs Trey sung from Dead50 run will pop up on Phish summer tour. Viola Lee Blues was the song that sealed the deal for me 16 years earlier when Trey and Page joined Phil and Friends in April 1999. They absolutely crushed Viola and I knew Trey could at least hold his own with Dead material. Certainly the Dead50's version of Viola was a different, mellower beast, but one of the standout jams from the first set. Just when everyone got cooking...the set ended. Short first set. Seven songs. What happened to the rumored two-hour opening set? Then again, toward the end of their run, the Dead could pull a 45-minute quickie on you and rush off stage before you could light a doobie. Initial impressions: planes flying overhead super trippy! Trey meshed well, but seemed passive. Bobby's vocals started out sharp. I couldn't hear the piano/keys in the mix. Only time I could distinguish Jeff C or Bruce Hornsby was during one of their solos. The drummers looked like they were having the most fun. Oh, and every time Bill Walton appeared on the video screen, the crowd applauded. 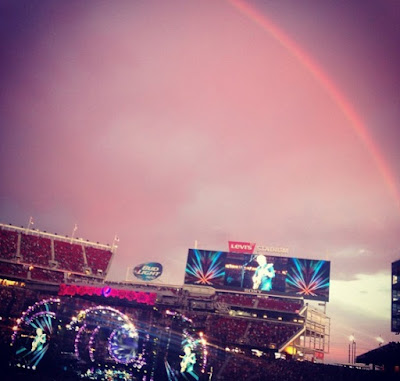 The rainbow conspiracy. We had scattered clouds and I felt a few drops throughout the first set. I went to Japan to see Phish in 2000, and an rainbow appeared over the outdoor show (in Tokyo's Hibyia Park) during the Character Zero encroe, and the usually reserved Japanese crowd went berserk. I went to Lockn last year and Jeff Tweedy got all surly because a rainbow appeared during Wilco's set and he got upstaged by Mother Nature. The crowd at Dead50 went nuts over the rainbow. One woman in front of me squealed, "It's Jerry smiling down from heaven." Big LULZ to whomever trolled Billboard about the rainbow hologram. If you gonna blow 50K on special holograms, they shoulda paid a little more cash for a bloated Pig Pen taking a swig of a jug of cheap wine or how about a 1977-era Jerry Garcia with an afro full of black hair? Then again, there's a part of my brain that flashes me a warm-fuzzy image of the end of Return of the Jedi with the ghosts of Yoda and Obi Wan watching the party from afar with Jerry Garcia, Pig Pen, Brent, and Keith.

Long setbreak. Over an hour. Reminded me of the shows I saw in 92-95 when the break was usually longer than the first set. Alas, setbreak gave me more time to catch up with friends, watch home videos of Jerry Garcia scuba diving, and soak up my favorite past time -- people watching.  I could write 50K words on some of the unusual characters, extra terrestrials-hiding-among-us, and waaaaay-gone acid casualties I encountered this weekend. When I'm at Phish, I'm definitely one of the older fans... but with the Grateful Dead, I was always the Gen-X teenager who hung out with middle-aged hippie Baby Boomers. At this point, I'm their age now. There was a nice collection of younger college-aged fans at Santa Clara, but for the most part the majority of the tie-dyed-clad crowd was older than me. That meant lot more sitting down for lengthy parts of the show. You'd make a killing slinging Adderall during the Drums/Space segments. Hey, I'm not making fun of old people... I was gobbling 15mg Adderalls like candy to turbo-charge my own depleted energy reserves. Besides, Bob Weir had a stool onstage so he could rest just in case he doubled-down on his Vicodin and started to nod out in the middle of Dark Star.

Cryptical was another throwback that kicked off the second set. The background video screens stood out more when the sun went down. Dark Star might have been the first intergalactic jam vehicle. The Dead had been using it to contact the Mothership for almost half of a century. I was most excited to hear St. Stephen... like a kid on Christmas morning. I never caught St. Stephen in 46 Grateful Dead shows. They stopped playing it four years before my first show. Trey whipped up a reserved solo and it seemed like Phil was encouraging him to really open it up and let it rip. The first big flub of the night worth mentioning occurred during The Eleven and it did not have anything to do with its weird time signature. Bob Weir threw his arms up at one point after mixing up the lyrics. I burned down a fatty joint during Lovelight in honor of Pig Pen ("Get your hands outta yo pockets!") Drums were the perfect opportunity to patch those old bones. Pretty much everyone sat in our section who wasn't born after 1987 or was dosed to the gills and dancing their ass off. Kinda funny to watch creepy old guys ogle scantily-clad Burner girls getting down during Mickey Hart's EDM express. After segueing out of Space, Phil sang a gravely What’s Become of the Baby. I'd like to meet the few folks still alive who saw it the one time the Dead actually played it. I'm a bad Deadhead because I did not recognize that song. I texted Andrew, who was on fleek with his Dead knowledge, and informed me about its appearance on the B-side of Aoxomoxoa. One particular lyric from the Other One summed up a lot of our initial forays into the Dead subculture... "The bus came by and I got on, that's when it all began." Morning Dew still held its emotional poignancy, but felt like everyone ran out of gas by the end of the set. Bruce Hornsby sang lead vocals on Casey Jones encore. Really the first time felt Bruce's impact on the show. He still has great pipes. It's always a good show when your favorite band encores your favorite song... Casey Jones.

Top 5 song I can't wait to re-listen (in order of appearance): Viola, Dark Star, St. Stephen, Lovelight, and Casey Jones. As I was walking out with my girlfriend who was clutching her rose, I thought about what Senor said, "It's been a while since I saw so many happy people gathered in one place." 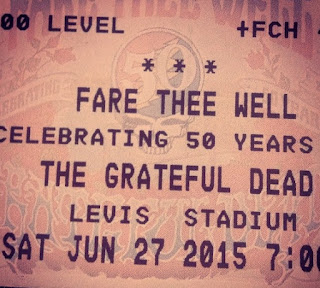 You might be qualified to receive a $300 WALMART Gift Card.