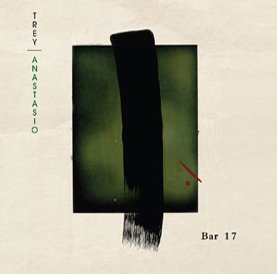 I listened to Trey's new album Bar 17 a couple of times and I didn't like it. I have to say that every time Trey releases an album... I don't like it right away and I eventually warm up to it. At this point in his solo career it's evident to me that my favorite variation of the Trey Band was one of the firsts when he released his self-titled album. All his releases since then wither in comparison, particularly Bar 17.

Bar 17 is an album that features an interesting mix of dozens of musicians including Mike Gordon, Jon Fishman, and John Medeski. Everyone knows that Trey is a talented guitar player and unheralded composer. Individually some of the songs he put together are remarkable especially when he mixes an orchestra with his acoustic guitar. But when you look at the album as a whole... it's schizophrenic. Bar 17 lacked cohesion and a central theme.

At least on Shine, Trey's album from last summer, we all understood the source of inspiration, energy, and emotions. Trey was crushed after Phish broke up and he hid in his studio aka The Barn and wrote a ton of music while he sobered up and watched his marriage evaporate and he allowed the last lingering memories of Phish to be blown away by the cool Vermont air.

While listening to Bar 17, I felt very lost and I think Trey is also confused. SuperDee said in best in her review of Bar 17 over at Jambase:

"More than anything else, this album confuses me. Does Trey want to be a composer of modern symphonies or musical theater? (This could be an intriguing direction.) Or perhaps he'd like to be a pop darling? (Sorry, my love, this doesn't seem likely.) Does he want to sing lullabies or does he want to be the bad-ass guitar rocker for which we are all yearning? With Bar 17, I just don't know."

On Bar 17 it seems like Trey is wearing too many hats. Perhaps he should have released three or four different albums with each focusing on a specific genre such as symphonies, popish tunes like Lou Reed or go hard-core rocking guitar via the Santana Highway.

Despite the clustered Bar 17, there are some good tracks such as a thunderous Mud City and a mellow Good-bye Head which Trey wrote with his daughter. She obviously didn't arrange the music that Phishkids twirl around and take ecstasy to, but she did write the lyrics and even got a liner credit in the album notes. Of course the biggest disappointment on Bar 17 was Dragonfly which sounded like a weak attempt at a Luna-esque or Velvet Underground Valium-induced version compared to what we saw and heard at the Super Jam. The Bonnaroo version of Dragonfly was 100% frenetic energy and that song nearly busted the roof off the tent we were in.

Trey knows his shit but this thick hearty soup of songs doesn't taste as good as his previous meals.
Posted by Pauly at 4:20 PM