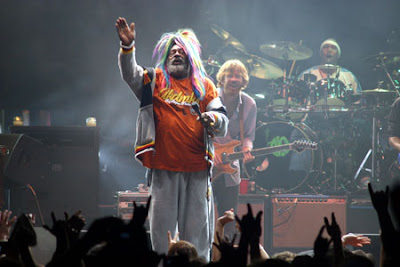 * with multiple teases, including P-Funk (Wants to Get Funked Up)
** first time played; with "Timber Ho!" tease right before "Birds"
*** with George Clinton and Parliament; everyone, including Phish, left the stage at the conclusion
**** With Fishman singing opening line of "Touch Me", not played since 12.3.94

Here's what I wrote four years ago on my main blog, shortly after the show ended:

Why was last night magical and special? George Clinton, the funkmaster himself, joined the fracas and took over the show for 30 minutes when he came out with the rest of Parliament Funkadelic. Quite and amazing performance and a sincere homage to Captain Funk himself.

Trey was smoking. Page was completely on. Fishman was hanging tough. And Mike was breaking out the heavy spacy-cow-funk all night. Cities? Scent of a Mule? Makisupa? L.A. Woman? Tube!!

Zobo, sititng in the sixth row, called second set Tube opener and although they never finished it, I was still loving life. NICU in the first set was sweet. And 2001 and Down with Disease were some of the better version in the post-hiatus era. I had an awful seat up in Section 412, but it sounded great and we had a cool section. Bruce arrived earlier in the day and last night was his first show this run. My buddy Byron, the Ragin' Cajun' from Louisana was up there with us in Sec 412. We saw a lot of Galactic shows in New Orleans and Texas together. Ironically, he called LA Woman before the show started. Japhans Emi and Junko were behind the stage also up in the 400 level. I rescued them and brought them to our section and they had a much better time in the second set!

OK, after several years of reflection, I think I over-estimated the quality of the show. I said it was a Top 10 all time... and it's definitely in the Top 20 all time that I have seen, just not the Top 10. I was shit talking and jacked up on several heady rolls at the time of the original publication. Suffice to say, I'm totally sober now and have listened to 12.30.03 many many many times since then.

It was a historic show because of the added element of P-Funk, and it might have been one of the last great Phish shows. I can think of a few moments in 2004 where the band shined, but I can't pick a specific show in 2004 that could compare to any of the Miami shows.

In short, the Miami run was the last great batch of Phish that I would ever see. And 12.30.03 was the one show during the post-hiatus that stood out from the rest.