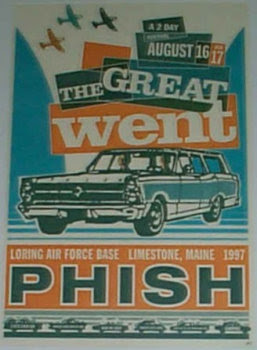 This was a latenight set during the Great Went, that took place the morning of August 17. All four members of Phish played keyboards/synthesizers (with occasional vocal forays), sitting on the back of an eighteen-wheeler, which was parked near the entrance to the concert field. There was a small lighting rig. Earlier in the day there were a few thousand rave-style fliers circulating ambiguously advertising a "Disco" featuring MC Neoncellgap, DJ LeMore LaLip, etc, and you can hear some announcements to that effect at the end of the set. Also of note : brief footage of this set can be seen during the film "Bittersweet Motel", during the Great Went "2001" montage.

Email ThisBlogThis!Share to TwitterShare to FacebookShare to Pinterest
Labels: Phish - Rare and Unreleased