Editor's Note: Let's welcome ChinaKatSunflwr to the mix as a guest poster!

With the sun blazing overhead and temperatures in the mid-nineties, Wednesday could not have been a more perfect day to play hooky and go Phishin' at Darien Lake.

Driving out from Rochester, I saw cars bearing slogans such as "Read the Fucking Book" and "SubiGreenberg" heading toward Buffalo as early as 10:30 AM. According to the TicketMaster site, parking lot opened at 10, and the park was supposed to open at 11. My party got on the road some time around 1, and arrived on lot shortly after 2pm. Traffic coming in at this point was minimal and we were parked in the grassy back lot, where a Shakedown had already been established across the field. Parking staff were not very good at spacial relations, eliciting complaints from our neighbors, and by late afternoon several of the cars around us had even relocated. 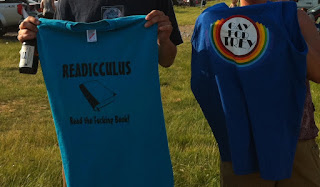 I met up with a couple of my friends who were opting, like many, for cool brews and the shade of an easy-up. Along the way we passed a bunch of security officers emptying out coolers. Not sure what the scene was there, but it's fair to say security staff was a bit over-zealous in their random enforcements all evening-- they weren't necessarily busting up everyone, but once they had their gaze set, they meant serious business. Saw lots of unders getting their beverages taken, and the presence of golf carts full of large yellow shirts made the environment hostile for those of us wishing to partake in a little clearing of the head. It was so hot it was hazy, and the lot was mellow at this point. Although nitrous made it's way to the party early, not much else seemed to be going on.

We decided to hit the waterslides around 3. Anyone entering the park needed a Phish ticket, and there didn't actually seem to be many floating around for sale, so we hit up the Box office. My boyfriend lucked out when a phan who had purchased a pav at window offered to sell his lawn for $40, meanwhile my girl friend-- who had ordered her ticket for Will Call-- was waiting in a line of increasingly hot and anxious customers. Apparently Will Call was waiting on a ticket delivery, but the locals weren't really interested in excuses, especially from TicketMaster, and they were getting restless. Some of them had been waiting over an hour and, like my lady friend, just wanted to get into the park. Our timing was spot on, though, as a golf cart rolled up not two minutes later with stubs to soothe the near-rioters.

The park itself was, surprisingly, wook-free! I expected to see a lot of spunions, beefed up security, and dready screaming babies, but it was really very low-key. Plenty of smiles, overpriced Dip-n-Dots, and hot girls in tiny bikini tops to keep spirits up. Right away we hit water park to cool off. None of the lines for the watersides were over 10 minutes all day, and there was a strong breeze which kept the heat tolerable. 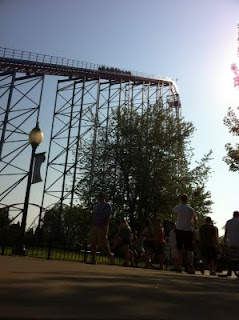 Overall, the park experience was a bit strange. They seemed to be understaffed, and some rides, such as the Superman, didn't seem to open until 3pm, and then closed sporadically throughout the afternoon. The staff would tell everyone a ride was closing, not let anyone else get in line, and then 30 minutes later it would be hopping again. Unsure what the strategy was, but it kept the heads appropriately confused.

A little after 5, we headed back to the parking lot, which was really in full swing. On a mission for a pre-show quesedilla, I headed toward Shakedown. Headies were in great abundance, one guy even shouting "make me an offer!" Psychedelics were few and far between, molly was present, $100 grams. Heard a few people selling K, and one guy searching for yay, $10 balloons of nitrous were not in short supply. Noteworthy lot food included the mac-n-cheese I also saw in Bethel, the broccoli and cheese quesedilla I inhaled, and a girl selling novelty ice cream bars out of a chest-freezer. Hoops were going for $15, T-shirts $10, heady wrapped crystals negotiable.

Show time was 7pm, so everyone started heading into the venue at this time. Pat-downs and bag checks were lax, but security was everywhere. Arriving during Nellie Kane, I had the guy behind me confirm that it was the (unusual) opener. Mellow Mood was a pleasant surprise and, in my opinion, truly summed up the entire atmosphere at Darien that day. Buffalo Bill was a little nod to the hometown show, which didn't go unappreciated by Western New York phans.

KDF is not one of my favorite tunes, so I decided to take a walk around the venue. Phish was tearing it up, and everyone from the back of the lawn right up the the rail was getting sweaty when Wolfmans brought some much needed funk to the tight, but mostly chill set. Rift provided another tonal switch-up, and Undermind saw the first glowsticks of the evening make their way into the pavilion. Ride Captain Ride had me practically giddy, a definite first, and the whole pavilion went crazy. A tightly-executed Ice was an ironic little addition to the set, and Dog Faced Boy was yet another first for me.

Brian and Robert kept the mellow mood going, and I suspected the band was intentionally preventing the crowd from overheating. Security took advantage of the slower songs to push their way through the isles, rousting those who were getting stoned or rowdy. 46 Days brought the crowd back up like a rollercoaster, and Phish closed a long first set on a high note with a strong Limb by Limb and raging Zero.

We hit the lawn for a little chill time during set break. We overheard one guy, who was laying in the grass shouting on this phone, say what we determined to be the quote of the night: "I'm sweating my balls off and I just puked, where the fuck are you?"

Golden Age opened the second set, much to my delight, and my show-notes at this point just say "FUNK DE FUNK!" By the time Mike's Song started, a serious glowstick war was underway, and it was a full-on dance party in the pav. My boyfriend, who rarely sees Phish these days, really likes their slower songs, and I had joked about the band playing Fast Enough for You earlier in the day; so it was a great surprise to hear a tender-as-all-get-out version tucked between Mikes and Weekapaug. The Weekapaug jam gave way to a tripped out What's the Use, and CK5 took control of the crowd, lighting up Darien's unusually shaped shell with some seriously languid blues and greens as the band transitioned to a nice and concise Theme. 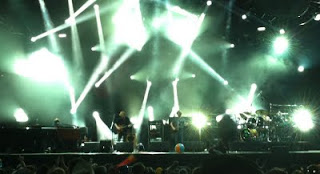 BDTNL is always a potty break for me, so I did some crowd patrol. By this point in the night, there were a number of drunks laid out on the lawn, and a majority of the crowd seemed to be jammed into the pav. I called out a Hood to my boyfriend, but the band ripped into a short and sweet funkified 2001 instead. Hood followed, though, and I cruised the 200 section during the anti-climactic jam, dodging glowsticks and still being halfheartedly accosted by security to find a seat. My friends general consensus was that Trey seemed impatient-- more than once, it sounded like Fishman was struggling to hold him back in a jam. While a part of me appreciates a nice tight version, I could definitely hear a slight rush in songs like Golden Age and 2001.

However, exiting the show after the Good Times Bad Times encore, sunburned phans seemed overwhelmingly satisfied. With more bust-outs than any other show this tour and a slew of crowd-pleasing covers, Phish kept Darien Lake well amused!

You can follow @ChinaKatSunflwr on Twitter. All photos are courtesy of her!
Posted by Pauly at 1:11 PM

Welcome to the Mix Kat. Great seeing you again at Bethel and Great job on the recap. One day I'll drive west for a Darien show and Wegmann's run.

I would not call that It's Ice "tightly executed". It was actually not played very well at all.

BDTNL is always a potty break for you? Wait for set-break and don't be a douche...

@Rob... there's no need for that type of douchey language here. Same that vitriol for PT.

Nice review China Cat welcome to the Coventry crew. i agree with you that BDTNL has a slow start but gets cooking by the chorus.