Editor's Note:  We welcome again Colorado resident Denver B. Check out his recap from night #1 at Merriweather.

Waking up in Camden NJ after a phish show is like waking up on a Saturday in college at a cigarette-stank, ratty carpeted apartment that belongs to someone you can't quite remember next to a girl (or guy -- ladies, don't think we guys don't know you do this too) about 15 pounds over your limit. You reach for the glass of (you hope) water next to the bed, think back on the good time you had the night before then wonder how you ended up where you are now, vow to never speak of it again and then quickly get the fuck out of there so you can redeem yourself that night.

I peeled myself out of the sticky sheets of the Comfort Inn and went outside for a joint in the morning, remembered I wasn't home in Colorado and opted instead for taking one hits in the bathroom. No food, so I grabbed a beer for breakfast and sat outside with Wife while everyone else got rousted. I admired and snagged a picture of the vaguely racist mural on the front window of the Persian-decorated Italian-Mexican restaurant attached to our rat nest. The drive down to MD wasn't bad at all. Rocked some Headhunters, puffed bowls between toll stops and stopped in at the NIKE outlet for some new kicks. 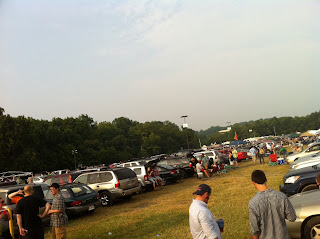 We checked into the hotel (a nice one this time), grabbed some booze at the store and headed out to the venue just a few miles away. Max pulled some smooth moves and got us into the handicap lot just outside of the band buses. First thought: holy fuck are there a lot of police in this parking lot. Everywhere you go there's cops on golf carts, bikes and on foot -- not that it stopped people from pre-gaming, but the mood was more reserved than Camden and nowhere near as party-down as it gets in somewhere like Deer Creek. I ended up getting buzz off schwaggy beer and (more) Crown Royal. Everyone in our group was lazy getting their shit together and while we were still dicking around behind the car the band came on and went into the Daniel opener. We scrambled to get our shit and went in the lower Fish-side entrance to the sea of people.

We had lawn seats and also had faked pavilion passes, but for some reason our group thought it would be a good fucking idea to go wading through the ocean of people in the lawn to try and find a spot for 6 in the middle. The lawn crawl took it out of me -- very hot, sweaty and claustrophobic -- so I bee-lined for the top of the venue and drug our group out of the swamp as the band went into AC/DC Bag. Now I'm two songs in, still haven't found a spot and haven't even had a chance to stop and listen to the band. The group made the decision to go into the pavilions and meet up behind the tapers.

I finally got situated during Ocelot near Noah, the guy who is always selling pins. Max knows him, and they caught up for a second. Noah handed Max his hat and told him to have me pick one. I fittingly snagged the Ocelot as Trey pulled out heat. Page teased Wolfman's slightly before the band explored Mike's bluegrass/country side with Access Me. Vultures was sloppy to start, but smoothed out in the middle -- though I ended up leaving for a pee towards the end and making it back just before WILSON.Those of you who know me know my dog, King Wilson. It's hard for me to not imagine anything but a 150 pound Great Pyr dog with a crown on his head. While my dog is named for the song, it's not always one of my top picks.

Trey fucking destroyed Wilson last night, though. Going right back to his metal show guitar work in BBFCFM from Camden, he was fret tapping and slaying his poor 'doc. Pure headbanger steez and one of the more memorable Wilson's I've ever got. Sand was funky and dancy with page laying down funkiness on the clav. Trey played a really cool melody after the second verse of Sand (i think that's when it was) that distracted me from the jam and I spent five minutes trying to figure out what -- if anything -- he had played. Still have no clue, though I haven't heard the recording yet.

By this time, the taper in front of us had begun to sweat, jaw and constantly run his fingers through his hair. Mahl'd out for sure and his friend next to us confirmed it, offered us K (which we politely declined) and suggested his friend might have some to share. He couldn't form a sentence, just hand motions, so we ignored it. Another taper in front of us had a Roses Are Free t-shirt on, and said he's been wearing it to shows for 10 years in hopes of getting this song. Thanks bud! I went out to the lawn to get a second view now that my nerves had been calmed with a few joints and some Crown just as the band went into Reba. Aside from god awful sight lines, MPP is a pretty fucking cool spot. The log cabin-like stage structure and the abundance of trees give a more comfortable feeling than the more soulless steel sheds around the country.

Page went into On Your Way Down and I forgot about everything else going on. What a fucking great tune to showcase The Chairman of the Boards, both vocally and instrumentally. Page howled out the words and destroyed with bluesy B3 and distorted, soulful clav. The last time I heard this live was in 1998 in Houston. Antelope closed out the set, and while it was good it wasn't memorable. In fact, the whole set on paper looks a lot better than it 'felt' at the show. The group consensus in the hotel today was a disjointedness to the song selection and lack of thoughtful and inspired jamming (aside from On Your Way Down and Wilson) didn't do much for anyone. Or, almost anyone... by the time we were being told to RUN LIKE AN ANTELOPE OUT OF CONTROL the mahl'd taper in front of me seemed close to loosing his shit -- sweating like it was a sauna and rubbing his face and head profusely.

Set break was uneventful, save meeting a guy named Chris who was celebrating his 100th show a few rows behind us. Congrats Chris! The only other noteworthy meeting was finding some sketchy flat-brimmed wook chick in a miniskirt and hi-top Nike dunks selling K. That must be really big out here...nasty.

The second set started with Birds of a Feather and the two of us made our way back through the crowd for Tweezer. Got to the seats, boogied and realized i needed to take a leak really bad (stupid cheap beer running through me)....Huge glowstick war going on behind us during Tweezer -- which lumbered around at high speeds for a while but never quite found takeoff.

I'm in line to take a piss during the jam, yelling at people in the porta-potty's about taking too long with the guy in front of me. Just as someone finally opens up the door, the dude ahead of me is about to go in, these two girls come running up.

girl: Oh my gosh, my friend is about to puke can she please go head of you?
dude: (pause). Uh, sure. Go ahead.
[friend runs into bathroom]
me: (to girl) that's fucking brilliant. You guys do that move often? I'm gonna have to tell my wife about that one...
girl: no, seriously, she's really sick.
me: no she's not. you don't have to lie to me, she already is in the bathroom.
girl: no. please, could you be quiet? you're making it worse...
me: fuck no I won't be quiet. YOU ALRIGHT IN THERE SWEET HEART? DID YOU FALL IN?
girl: you're an asshole.
me: I'm not the one who scams my way to the front of a porta-potty line.
[friend comes out of the bathroom just fine, girls walk off]

Made it back for the transition of Horse & Silent, which was fine but didn't really do much to help the flow of the show in my mind. Waves was solid though I couldn't get into it. Rock and Roll started to get me out of that funk when the band went into a very deep and strange noise jam that dissolved out into Albuquerque and completely brightened my mood. Funny how a morose Neil Young song was the one to do it, but I haven't heard this live since Cypress and hearing it instantly took me back to that sleepy, sleepy part of the night in southern Florida. Piper rose from the ending tones and brought the crowd up to a fury before bringing us all right back down with Velvet Sea. This up and down energy really lost me and Wife and I went walking around the venue, slightly bored, until 2001 came on with a THUNDEROUS Mike bomb reminiscent of Rush's Tom Sawyer. In fact, I even turned to Wife and said "holy shit, are they going to play Rush?"


Instead of going into Stealing Time, the band would have done better to have raged the 2001 for 15 minutes. I don't mind Stealing Time and maybe it was just me and my pissy mood, but I was over the set by the time the song had ended. Show of Life continued the tempo-drag theme of the show (again, I love the tune -- but not last night) finally ending with a very, very ripping Tweeprize (albeit it seemed to be cut short by Trey).

We waited a bit to go out, eventually making our way over the blue wall separating the far Fish-side section from the middle of the pavilion seats. Some of the high school seniors they had working security yelled at us to 'get off the wall', so we obliged by getting off on the side convenient to our exit. Max took a wrong turn and nearly ended up being held down by security for attempting to walk down the stairs to the band's buses. We hung out by the car for a few beers (by this time I was d-runk), crammed 6 people in the back seat of a 4-runner and got back to the Courtyard in time for the late night parking lot party. Nothing huge to report -- mostly because I can't remember shit.

We headed to the lot earlier today. should be plenty of fun to be had -- and I'll take better notes.

Quote of the Day:
(waiting in the long line for porta-potty)
Dude next to me: "Who the fuck takes a shit in a porta-potty at a phish show? Come the fuck on!"

Random note:
There was a heart-shaped balloon appropriately floating around during Access Me ("I just want access to the inside of your heart")
Posted by the joker at 4:20 PM