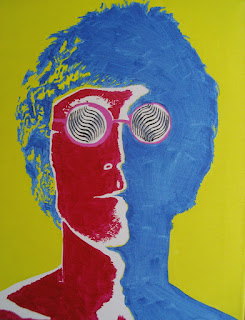 In 1970, Rolling Stone interviewed John Lennon and you can listen to excerpts to this candid recording in the video below. The interview was controversial at the time because Lennon admitted he ingested LSD over a thousand times, which made him the most "cracked" out of everyone else in the band (with the exception of George Harrison, who Lennon claimed dosed as much as he did).

Lennon told a funny story about his first acid trip (getting dosed by a dentist who was a renown "swinger" in East London) and how he and everyone else freaked out. At the end of the evening, while still tripping, George drove them all home, driving 10 mph.

Lennon discussed his second LSD trip he took during a visit to California. While he was tripping balls when he ran into Peter Fonda.

"I know what it's like to be dead," repeatedly said Fonda in a very devilish tone.

Lennon explained that Fonda was the inspiration behind writing She Said She Said.

Lennon was also a speed freak, a nasty habit he and the other Beatles acquired in the earliest days of the band in Hamburg while playing all night in clubs. Lennon said never took LSD when he was in the recording studio, but one day he accidentally took some, mistaking it for an "upper." He was so spun, George Martin took him up on the roof to chill out and Lennon sat out of that day's recording session.

The most interesting bit from the interview was when Lennon divulged... "I got a message on acid which said: 'Destroy your ego.'"

"And I destroyed me-self [sic]," explained Lennon. "I destroyed me [sic] ego. And I didn't believe I could do anything. I was nothing I was shit."

Of course, that stint of introspective self-loathing subsided shortly after when Lennon ate another dose and got back on track.

Listen to bits of the 1970 Rolling Stone interview here: