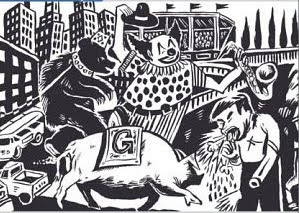 Here's a nugget of geekdom I uncovered.... Phish has never opened up a U.S.-based summer tour with the same song. I sifted through setlists via Phish.net and compiled a list of every tour opener since 1991. In 15 different domestic Phish summer tours, they have zero repeats for the openers. I was fortunate to be present for five of those moments -- including both summer tours in 2.0, and three openers in the late 1990s when I actually had lots of hair.

If Phish is purposely picking different song openers every summer, then you won't have to worry about hearing Possum to kick off Worcester one week from today.

So, what will this year's summer tour opener be?

The perennial chalk favorites for almost every show are Runaway Jim and AC/DC Bag. I wonder if they'll bust out a Levon Helm-inspired cover? Or perhaps pull a Mound out of their arses?

I've noticed in 3.0 they've often put typical set-ending songs in spots other than the end of a set, so I think this year they'll go all the way and open the tour with "Cavern" (which did occasionally open shows back in it's early days).

And the winner is...

funny they opened with Buried Alive, one of those not-obvious-but-so-obvious openers (it's opened a show 62 times, third most alltime after Chalkdust and Jim)