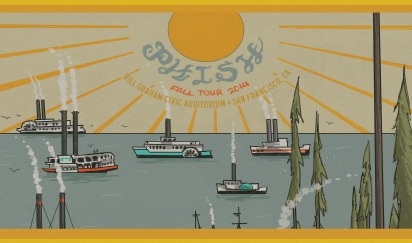 Night 2 of 3 in San Francisco coincided with Game 6 of the World Series. It was a potential game-clincher for the SF Giants. The city hosted a viewing party in front of City Hall, which was adjacent to Bill Graham Civic Auditorium... Phisheads and baseball fans mingling together in harmony.

Walking up to Civic Center, we saw homeless woman drop her pants and pee all over the plaza. No one else blinked. That set the tone for the night...SF Giants fans flooded the spot in front of City Hall, too bad I bet the Giants and they were getting crushed... two shakedowns popped up; one for SF Giants and the other for Phish... heavy SFPD (and even homeland security) presence which meant that hard to drink in front of civic center... sold my extra for $50 to hipster girl who was wearing a Lena Dunham-type grandma dress... extras going for $40, which was highest all tour considering extras for all tour were $20 and lower... Crowd Control opener feels like Phish trolling on us... Mike's Song was the "real" opener which sent a message: Monday was Fish Appreciation Night, so Tuesday is Gordo Day... Upbeat start to show, trying to keep up high-octane energy from previous night... I finally fingured out I love the trippy second half of Wingsuit... Plasma? It's growing on me, but feels weird without horns... I dig Moon for its potential. Page wrote it and gave Trey and everyone enough space to noodle around with it, but they are not fully opening it up... couple of transgender locals showed up and one of them was like 6-6 tall and in pigtails. They were really into Poor Heart and Mike's Groove... I love me some Gumbo, which it was in heavier rotation... Sanity was when everything I was on kicked in and I entered the "tripping ballz" stage of the evening... Antelope was standard but everyone around me jumping up and down... I heard FOOTLOOSE teases everywhere, but can't recall where.... KDF Set 2 opener through me off. I expect that as a show opener, but was skeptical until they won me over and crushed it. Unexpected big jam of the night... Mountains of the Mist was rough because we were dealing with annoying, angry girl who kept invading our area and demanded more dance space. Not a fan of those entitled, space-Nazis. Decided to move to new spot with much cooler folks. Sean agreed that your show neighbors can often make/break a show. Luckily, we moved to improve our overall show experience and rest of set was fun... Intense and loud Fuego  (in LA there was a drunk SoCal bro who kept screaming "DIEGO! DIEGO!" so Sean and I did the same in SF in his honor)... Julius had a lot more heart in in, and definitely not phoned in. It has become a cheap energy booster (like Twist) that Trey relies on as a shortcut. I told Joker he needed to listen to Julius and he responded, "Dude, I know you're still tripping when you tell me I must listen to Julius!"... Twist had a couple of mini-jams, but it seemed longer and trippier than the other versions this fall.... Jim had some band conflict. Trey really wanted to play it but rest of band didn't. Jim has been popping up late in the second set these days (versus a show opener or early Set 1 filler). I'm conflicted about Jim's late-set insertion. I know the boys shredded Jim last year at BGCA and it was one of my favorite moments of that run, but it lacks a wicked punch... Some wooks were blasting off tuff on deemsters during most of second set, especially Fuego and Hood. I mean, I'm all for mind expansion and DMT, but the middle of the floor at a Phish show does not seems like ideal circumstances... Hood delivered on all fronts. Deep dickin'. Best one I heard this tour... expected a big classic 70s cover (Cup or GTBT) and we got the Loving Cup... high-energy start to show, but set 2 was trippy/jammy. As my bud G-Rob would say, "The boys were playing to my buzz."

Here's my recap for BGCA 1.

Birddog, I wish you all the best in your Fall hunting endeavors. Thanks much!

Anybody have a re-up of this as well? Link's dead.