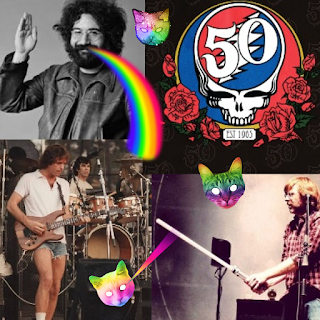 Up before the dawn hanging out in the hotel lobby. I asked the trio of older heads ('78-'83 tour rats) what they thought of Trey. They weren't into Phish, but the overall consensus was Trey did his homework and sounded good, yet restrained. We ate brunch with random Raiders fans in the East Bay, then re-upped at a San Jose dispensary with a tasty hybrid Animal Cookies (Fire OG x Girl Scout Cookies). We headed to Santa Clara shortly after the lots opened. Traffic flowed slightly better. We had a parking pass in one of the rare lots that let you tailgate and we pre-partied it up without hassles. The Kentucky crew stopped by with their own whiskey. Our base was adjacent to the Blue lot where mini-Shakedown was located, which was nothing close to a proper Shakedown from stadium shows of the past (where it resembled more a bazaar filled with carnival merchants versus a few easy-up tents and half-assed tie-dye shirts piled on a tarp). Compared to Saturday, the lot scene significantly bigger and more vibrant, yet still relatively dry on the liquid sunshine department. My pipe dream about scoring one last hit of 60s LSD was never going to happen. We found someone slinging Oregon Blueberry cartridges (hash oil for vape pens). Saw few wooks walking around with plastic bags filled with light-green popcorn nugs "Medicine. Get your medicine. $10 a gram!" Luckily we came across the choco-shroom guy. 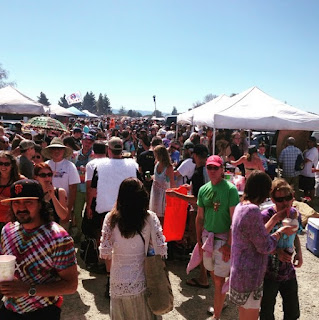 For a second night in a row, Senor was the man and scored us great tix a mere four rows off the floor in the back corner. Perfect vantage point for rainbow/UFO holograms and great spot to watch amped-up security guards try to catch wooks jumping the wall. Johnnie Salami had tix on the floor but he managed to toss me a headytreat over the heads of two ushers. Touchdown. My girlfriend and I sat in a mellow section filled with older heads. Most of the fans I chatted with did not see the previous night, so Sunday was their only show. The only knuckleheads in our section were a skeevy couple behind us puffing on some sort of meth/bathsalt concoction (he spent most of the show with his t-shirt over his head and huffing on his pipe).

Sunday was a tad smoother on the logistical front, but Levi's Stadium was still understaffed and overwhelmed. Inmates ran the asylum in most parts. Piano/keys section (Bruce and Jeff) sounded louder in the mix. I went in with minimal expectations but everything flowed better musically. The highs were a little higher, while the lows were not as cringeworthy. Trey continued to be the pawn between Bobby and Phil's ongoing cold war power struggle. Seemed like Phil wanted Trey to let it rip and kick it into high gear, whereas, Bobby ripcorded a few potential mammoth moments.

Show started an hour early because the venue had an 11pm curfew. The entire first set occurred with the sun still out. Something special about that breezy Sunday church-vibe being in the sunny outdoors with the ministry of the Grateful Dead. Feel Like A Stranger kicked off the first set. On both nights, Weir had a commanding vocal presence before he ran out of gas and petered out by the end of the show. Weir was on point with Stranger and New Minglewood. Jeff and Trey got lil mini solos at the onset of Brown-Eyed Woman. Bruce Hornsby sang lead vocals on BEW and you wondered why he didn't sing more. Alas, this is Phil/Bobby's band and not The Range. Loose Lucy was a personal favorite. Made me wonder who would be a better lot-girlfriend? Loose Lucy or Suzy Greenberg? Got to hear Bruce sing again on Loser. The more he sang, the more the crowd wanted to hear more of him. Row Jimmy was an "Andrew Takes a Piss Song" but it was also one of the more sullen moments all weekend. Sometimes you can't acid confronting the pain of missing Jerry until you hear someone else sing  Jerry ballads. The first licks to Alabama Getaway created a huge jolt of energy that ignited the crowd. Trey sang lead and I could see Phish busting out that uppity crowd pleaser this summer. Black Peter was another tough one to listen to. Tepid version and the severity of the nostalgia was too heavy to handle on a head full of shrooms. Some days, bittersweet Jerry ballads can really put a lump the size of a basketball in your throat. Hell In a Bucket was the highlight of the set... perhaps the show... and perhaps the run. We finally got to hear what Trey can do when he doesn't drive the bus on cruise control with a quick burst of classic machine-gun Trey melded with Jerry's UFO riffs. 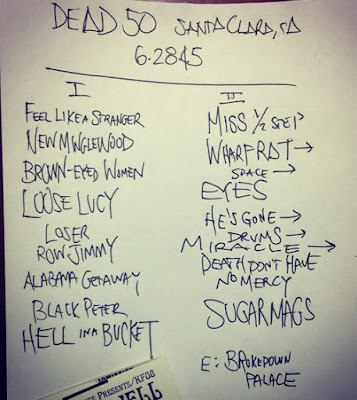 Another long setbreak, but another chance to catch up with friends. It was a family reunion for the bulk of fans that had not seen each other in years, or decades in some instances. Again, if you had a wheelbarrel of Adderall you would not have gotten ten feet before selling out. I need a little halftime pep speech in the form of a 15mg Adderall. To quote Dock Ellis, "I was high as a Georgia Pine."

Sun dipped down at setbreak. No rainbow holograms. Mississippi Half Step kicked off the final set in Santa Clara. What happened to Donna Jean? No invite to DJ? Wharf Rat melded into cosmic jam that really coulda took off into deep space, but they eased off the pedal and slid into a bouncy version of Eyes of the World. Buoyed by sweet playing by Jeff and Trey, just when Eyes got cooking Buzzkill Weir pulled the plug. He's Gone was rough. Too many bad memories. Jerry Garcia died in 1995, yet many Deadheads will agree that Jerry's spirit died many years before. I followed the Grateful Dead during their death rattle years (92-95), when the band was on auto-pilot during those tours that were primarily for lifestyle maintenance. Hey, it was one helluva party that had a couple of sincere moments every night. Felt a gentile cool breeze during the crowd sing-along toward the end of He's Gone. More Mickey EDM madness during Drums. More people watching. Super spunions and young kids grooving down hard to the rhythm devils. Got sucked into the video screen and the images of Jerry's hand (with missing finger) looked like ginormous tarantulas. They pulled out of Space with I Need A Miracle. I pulled a MacGyver and used my shoelace to unclog the one-hitter. Bobby went all bluesy with Death Don’t Have No Mercy. Decent job, but how about a Dead tune instead of a cover? Or if you do a cover, how about Dear Mr. Fantasy (with Trey shredding the Dave Mason parts and Bruce Hornsby singing the Winwood parts)? Sugar Magnolia induced a crowd sing-along. Stadium full of happy people. Hard not to feed off that collective positive energy. Even the few folks still sitting down got up and danced away for the the last song of the set.

Phil did his donor rap speech and Weir asked for a moment of silence for the guys who were not there. The solo encore of Brokedown Palace was sung by Weir. As a teenager at Dead shows, I'd watch in bewilderment at grown middle-aged men weeping when Jerry sang Brokedown Palace. I never fully understood it... the lyrics... the embodiment of the song until now. Hard not to get washed away in emotions when you hear the lyrics... "Mama, Mama, many worlds I've come since I first left home." I got two decades of living under my belt. Hard living. Balls to the wall, full speed ahead. Logged lots miles on the road less traveled. Millions of memories and more heartbreak for seventy lifetimes. I'm someone who tries to live completely in the present, which means I don't get stuck in the past too often. I don't re-visit those memories too often, so when those memories come back... they hit me hard. I completely under estimated the overwhelming power of the Dead 50 weekend... smashing the dams in my brain that held back decades-worth of memories... spent the entire weekend flooded with old memories of being on tour and enjoying the Dead with friends from all walks of life. When I first went on Dead tour, it was really the first step in my journey as a writer, so it was a mind-trip to come full circle. Intense moments. Flashbacks within flashbacks. Vibrant, rich, crystal clear memories flickering through my brain. Really tough to sleep after that astounding experience. 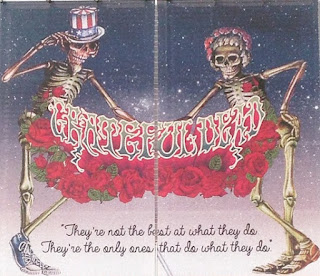 Final thoughts... with each show the band sounded better and Trey got a little more confident. You gotta re-listen to Hell in a Bucket. This bodes well for the Chicago run despite the small sample size. I'm with the consensus sentiment that I wanted more of Trey pushing the envelope on jams and utilizing Bruce Horsnby on the Jerry tunes instead of Phil/Bobby. I doubt the vocal arrangements will change, but hoping that they unleash Trey. Grateful Dead, much like life, was always about what you make of it. The location and musicality of Dead 50 were nothing close to being perfect, but for many of us, it was one last chance to spend time with old friends and get reacquainted with the warm, indescribable, yet infectious vibe of one final Grateful Dead show.

Noah Cole said…
Thanks Pauly. I agree -- nothing close to perfect, but I'm so happy to have had the experience. One final time to get something close to the Grateful Dead, to walk down that memory lane, to remember what a powerful force this band and this music has been in our collective lives. I went in with low expectations and they were exceeded. Looking forward to hear what they do in Chicago, but even more to what Trey brings with him on Phish tour this summer. More ripping Hell in a Bucket guitar Trey!
7/02/2015 7:25 PM