Miles Davis & So What Video 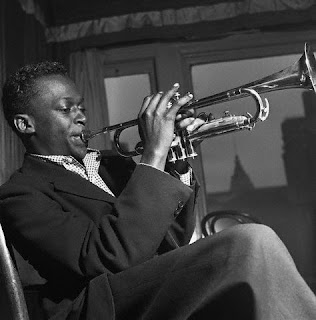 While on assignment in Australia, I read Miles an autobiography about Miles Davis, co-written by Quincy Troupe. I read about 10-15 pages a day in Melbourne. I started hitting a reading groove on the plane from Melbourne to Sydney and was almost done when it was time to leave. I wanted to finish it, so I brought on the plane with me instead of leaving it behind.

The book covered the highlights and low points of Miles Davis' career according to Miles Davis, so you get a one-sided version. Despite the slant, he's brutally honest about his drug abuse, beating his wives, and being a bad father.

My favorite chapters were about Davis' early days when he moved from East St. Louis to New York City after he was accepted into Julliard. He spent more time watching Dizzy Gillespie and Charlie Parker playing in Harlem and on 52nd Street than actually in school. He eventually starting playing in the clubs and quit Julliard all together to focus on playing full time. He was not even 20 when he was on stage with legends like Bird and Dizzy.

Eventually Davis got caught up in heroin like his idol Bird. He was a functioning addict for a couple of years when his habit got worse and nearly ruined his career. He tried to quit on a couple occasions but had a tough time getting off the junk. He finally conquered it but admitted that he drank a lot and snorted a lot of coke - so he was not completely clean. He just wasn't a stone cold junkie anymore.

Some of his best material was recorded in those first few years after he got clean when he began exploring with modal music. Sketches of Spain and Miles Ahead when he collaborated with Gil Evans. Those albums came before the Kind of Blue years.

I also dug the passages about Miles Davis opening up for the Grateful Dead in the late 1960s and hanging out talking music with Jerry Garcia. The one thing that stuck out of the entire book was Davis constantly talking about random nights he stayed up all night talking and discussing music with his friends and other musicians. When he wasn't shooting up, he was constantly listening and playing and expanding and taking chances.

Here's a video of Miles Davis along with John Coltrane performing So What live in 1958.

Click here to view So What via RSS or Bloglines...
I love how the guys are standing around in the back smoking cigarettes. Maybe reefer?
Posted by Pauly at 4:20 PM