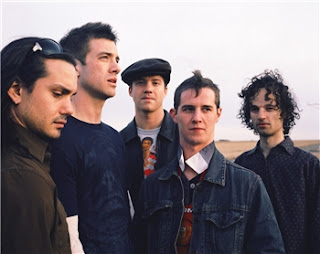 Toubab Krewe will be performing four special shows to close out 2007. They added two shows, one at Bowery Ballroom in New York City on December 27th and the other at the World Cafe Live in Philadelphia on December 28th. They will conclude the year with two shows at the Orange Peel in their hometown of Asheville, NC.

Here's excerpts of a press release:

The run closes out an amazing year for the band, which has been credited with "setting a new standard for fusions of of rock 'n' roll and West African music" (Afropop Worlwide). They kicked off 2007 in Essakane, Mali, where they played the legendary Festival of the Desert, known as the most remote festival in the world. Extensive tours of the U.S. followed, with the band playing over 100 shows, including sets at premiere festivals such as Langerado, SxSW, Wakarusa, High Sierra, 10,000 Lakes, Echo Project, Wall to Wall Guitar, and the Voodoo Music Experience. Along the way they played with luminaries such as John Paul Jones (Led Zeppelin), Mike Gordon (Phish), Lamine Soumano and Tinariwen.

The band is currently working on their sophomore album with Grammy winning producer Steven Heller, which is slated for release in March 2008. They launch into the new year with performances at Jamcruise, setting sail from Ft. Lauderdale, FL to Roatan, Hunduras and Cozumel, Mexico on January 4.

For more information, head over to the band's MySpace page.
Posted by Pauly at 4:20 AM