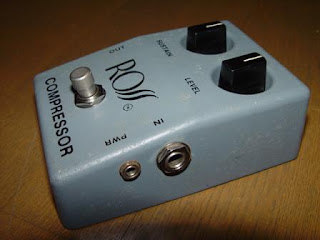 There has been a lot of chit-chat on the Phish-related interwebs about a little piece of equipment called a Ross Compressor. Put simply, Trey didn't use this pedal in his rig post hiatus, and people noticed.
Enough people noticed to warrant some 499 threads on Phantasy Tour. Then Tom Marshall asked Trey about it, and the boys over at Relix got wind of the whole thing and wrote a piece about it.
Pauly asked me to explain simply what this whole thing is about. The best way I can simply explain it is the "compressed Trey tone" means a guitar tone that is "clean", rather than a guitar tone that is "dirty", or distorted.
Broadly speaking, think about it this way:
Heavy Metal, Hard Rock = Distorted Tones
Jazz Guitar = Clean Tones
Stating the obvious, Trey plays with a wide variety of tones- nearly every song has a little bit different variation of guitar tones at some point. Ever watch Trey mess with the knobs on his guitar while he is playing? Ever see him stomping around on pedals? He is playing with the tone, trying to get the right sound. But to some phan's ears, the compressor makes a difference everywhere, no matter what he is playing.
Without the Ross Compressor, its easier to get to That Place. That Place in your soul? No. That Place is the Oxy Jams. The grungy dirty oxy jams where the guitar is distorted and we can't tell what notes Trey is playing. He could really do it either way, but without the compressor there is a dirtier, crunchier sound.
Mr. Miner has an excellent post explaining this in greater detail. Check it out.
Even more interesting, on Trey's web site you can mouse over his rig and understand what equipment he uses. Pretty cool.
Where do I stand on this issue? I really could care less about a stupid compressor. I am happier with the fact that they are gonna tour again and hope that Trey is practicing. There are a lot of variables that go into Trey's playing...I think Trey should do whatever he wants and make the guitar sound the way he wants it to. Happy Trey = Good Phish shows. I don't tell God how to cook.
Posted by the joker at 4:20 AM

I recall some of the background chatter on Slip, Stitch and Pass... where a phan screams out, "Sounds good, Mike!"

Trey knows the sound he is seeking. Sure it's a warm fuzzy feeling that hardcore fans want to bask in those halcyon days, but in the end, Trey is an artist and artists are always evolving, even the next incarnation of the Phish.

I have faith that Trey knows what he's doing... compressor or not. As the Joker said, as long as the boys are sober and practicing, we're going to get a magical treat no matter what kind of equipment they use.

When are we going to read about Page wearing a cilice around his scrotum?

Ever hear one of those sick cilice jams where you just know Page tightened it up by three notches, and you can just hear his balls bleeding? He's just torching the Hammond B3 as he cruises right by That Place and heads on over to That Other Fucking Place.

Post-hiatus was a disappointment because of the whole gangrene issue, and the potential amputation scare. Let's face it, if Page's balls aren't dripping blood and sack sweat he just can't get to where he needs to be.

I don't give a shit if Page is running the Hohner D6 clavinet through the Maestro Phase Shifter, if his nuts aren't wrapped up in a spiked fucking belt this band means nothing to me.

I think it is a good move for Trey to bring back the compression/sustain pedal because it is a critical part of "his sound", his tone. I really can't imagine him playing snappy staccato lines ala santana on songs like Stash without it.

I have used a compression pedal for years and they are great for evening out the tone but the problem is it clips off the higher highs and lower lows in your sound
kinda like Paxil/Zoloft does to your overall mood. It can feel a bit "limiting" after a while.

I found this good write up on compression:

In it's simplest form, a compression "squeezes" a guitar's tone. The analog tone from a guitar consists of a great many frequencies -- a compression pedal addresses and squeezes the range to even out the tone. This makes the resulting tone more consistent and level.

Compression pedals even off the loud parts and beef up the quiet parts -- this not only levels out the tone, but also yields greater sustain.

Of course, this does come at a cost -- by squeezing the tone, you diminish the dynamic range. However, the payoff is a fatter tone and a more consistent level.

Bottom Line: I hope he uses it as much as he used to before for the songs/parts of songs that it suits best!