RIP Doc Ellis; Threw a No Hitter on LSD 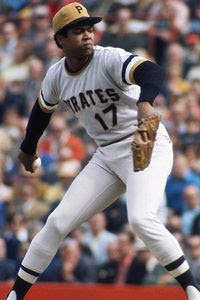 Doc Ellis passed away the other day at the age of 63. The former major league baseball player was most famous for throwing a no hitter in 1970 while under the influence of LSD. He didn't think he was supposed to pitch that day and dropped acid that morning. When he got to the ball park, he took a bunch of speed (Benzies) and took the mound. He was wild that day and walked eight batters but also did not allow the opposing team to collect a single base hit off of him.

Here's an interview with Doc Ellis...


Seriously, a non-no on liquid sunshine? I could barely keep my shit together at a Dead show and scribble down a setlist let alone toss a no hitter.

Weekend America is loaded with pro-L content and Deseri Cooper is a cool dready reporter too...there is a great story that they did about the Ball Room Dancers that got onstage at MSG in 98'
here is a link:
http://weekendamerica.publicradio.org/display/web/2006/12/30/shall_we_dance/

Thanks for sharing David!