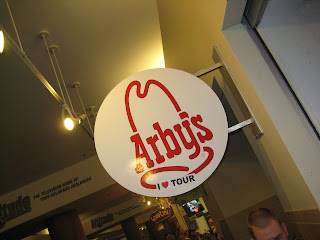 Last night was the night before the night- a show that sometimes produces the better of a string of New Year's shows for many a band...check out the setlist:

The boys came out with guns a'blazing and whipped the crowd into a frenzy with a solid version of Fishwater. This was not one of those shows where there are a couple of songs to warm up...The energy was kept high for all of the first set.

The stage was set up like an upside down city. Clouds were on the stage floor, trees were hanging upside down from the light rigging and the screen behind the stage was showing an upside down city skyline, probably Denver's, but was hard to tell. During the 2nd set the backdrop changed to the city at night. It was the kind of stage set up that took me pretty much the whole show to figure out what the hell I was looking at.

When Panic can nail versions of songs that would normally bore me a little but get me to like them, I know its a great set. This was the case with Walkin>Wonderin - these delivered with more intensity than I expected. The rest of the first set had Jimmy Herring ripping our faces off. There was a brief release during a beautiful Gimme, before dropping back into full on all aboard the train shredding town for Lil Kin > Action Man.

At set break my crew moved from Jimmy side over to a section of curiously unsold seats, close around the side of the stage Schools side. We were very close to the stage on the side, and we could see the band's facial expressions as they turned to each other during jams along with a great view of the crowd as well. We were so close that we could smell School's farts. I think he ate 2 large pizzas at set break. We could feel the band give and receive energy...it was a great place to be. Additionally it allowed the our group of 20+ an area of seats to move around in as we pleased and felt more like a true GA show. Plus, it was fucking LOUD down there and Panic treated us to one of the darkest, angriest, dirty heaters of a set that I have seen in a while. 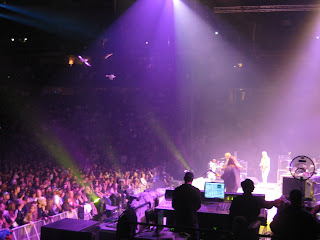 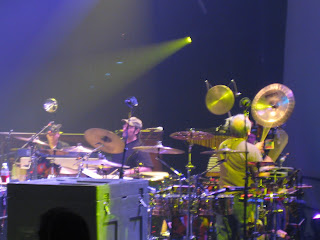 The Pigeons > Maggot Brain > Other One Jam > Drums > JAM > Maggot Brain > Pigeons no doubt looks impressive on paper, and it was quite the journey of ups and downs at the show. The Drums > JAM got a little out there and lost some of the original intensity produced by the start of Pigeons > Maggot Brain. The JAM lost me for a minute there, until Schools decided to turn it up to 11 and pound the shit out of the bass back into Maggot Brain. Jimmy had the Alpha Dog rock and roll guitar out last night and never let up. Widespread Panic showed their side that plays fist pumping shove it down your throat rock n' roll. The band played in a way that made me feel like I had done something devious but gotten away with it. Three guitars ringing in my ears...loud, angry and dirty, it felt so good to rock that hard.

The crew returned to my house for some chill out time and work on the rest of the keg. As you know tonight is the big night and we plan to dress "formal" to the show and most likely hit some after parties.

Aside from the show, Lissy gave me a bright yellow shirt that read "WAKE UP AND RAGE" on the front and "FUCK YEAH" on the back...it is certainly my new favorite show shirt. Its great to find out who is partying at the show as I got a lot of "Fuck Yeah!" 's and high fives from strangers. Its only downfall is Im an easy suspect for security to recognize - a bit hard to "sneak" past the guard checking tickets in a section im not supposed to be in with a bright yellow shirt on and profanity on the back. 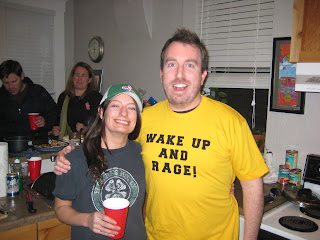 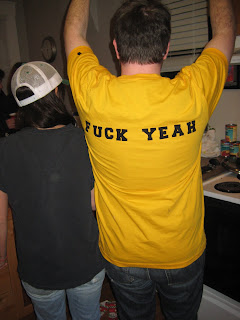 Gringa in the Campo said...