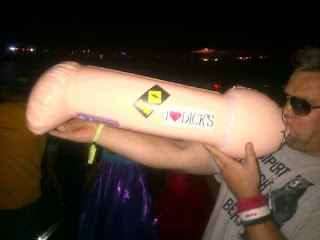 I survived the third installment of Phish Dicks. Phish loves Colorado. They played Colorado every summer in 3.0 and once during a fall tour in 2010. Red Rocks and Telluride are magical destinations that incorporate Colorado's natural landscape with the music. Unfortunately, those were some of the toughest tickets to get. Phish traded off Red Rocks/Telluride for a much larger venue at Dick's, but it's an impersonal soccer stadium in the middle of an industrial wasteland on the outskirts of Denver, far far away away from the mountains or anything resembling nature.

How can I sum up 2013 run? Friday gimmick schtick, Saturday night rager, and Sunday buffet.

Here are some random thoughts...

This was the only show that I wrote a mini-recap. You can find that 8/30 recap here. I have a few additional thoughts after re-listening to the show for the first time...

Ghost opener is better than I originally thought. Definitely not a throw away opener. The end of the Ghost jam that is super juicy. Listening to Icculus gave me flashbacks of partying in the "stoner's den" in college. Theme jam out gets an honorable mention. Ocelot jam included some deep exploration. I dismissed Stash initially and I had one of those moments like... "Man, what was going on at the show, because... I really missed this jam here!" Easy to Slip was a little stale. The Little Feat song was more suited for a set opener and nothing close to a "smoking set closer", but then again they had limited options with "E" songs. Last summer, Phish butchered The Stones' Emotional Rescue the year before for the "Fuck Your Face" show, so they wanted to avoid it this time around. Crowd was amped for PYITE set 2 opener. The end of Sand is such a cock tease, like those last four minutes (Fish flirting with 2001). That jam set the tone for the run with Fishman playing quarterback and actually pushing the jams more so than usual. Felt like 1998-99 all over again. Say Something has a thumping groove, but the vocals are so meh that it ruins the show. Short leash on Hood and Twist. Little more patient with end of Slave compared to rushed versions earlier this summer. The boys were all over the place with Oh Sweet Nuthin'. It's a slow ballad suited for a 15-minute block in which the band gradually builds up to the emotional crescendo (like on Lou Reed's version on Loaded). They whipped through it all in under 7 minutes. Phish needs to give the crowd a Meatstick tutorial, like those days when Page's (first) wife would get onstage and show everyone how to do it. I rarely see anyone doing the actual dance anymore. I forgot most of it. But I'm old. The 90s are fuzzy for me. 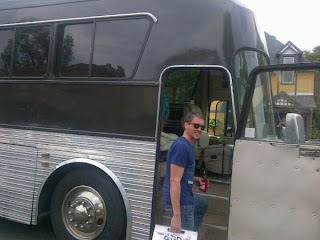 I was ambivalent about the gimmick show (more people distracted by trying to solve the riddle than staying in the moment), but I woke up on Saturday excited that the hijinks were out of the way and Phish could focus on unleashing a Saturday night rager. We rented the same party bus (thanks to Caroline for doing the grunt work) the last few years. Clutch move. The driver arrived late, but we still had some time to pick up necessary supplies in Shakedown. Dicks Shakedown is solid. I have a theory that the best shows are often correlated to a raging Shakedown. When there's an abundant supply of party flavors on lot, then the crowd is super inebriated and the band feeds off that elevated energy level.

We posted up in the back of the floor in front of the Page-side speaker tower. Great sound and lots of room to dance. All Colorado locals and it felt like I knew like 80% of the people in that area thru Joker/Jonas/Wildo. Buried Alive opener gave me flashbacks of 1.0 (it was my favorite opener for a while). Scintillating throwback. I had bet Buried the night before as the opener (but didn't night 2) and Pete Likes Phish was hoping to get it this run. I told him it was a long shot, and I was totally wrong. Wolfman's short infusion of funk. Trey showed off  with a lil wanking and a lil machine gun. Page didn't back down with some serious milking. Maybe it was the liquid sunshine but during the Wolfma's jam I got images of Leo fondling the three-breasted chick from Total Recall. Wildo thought Yarmouth Road had too many words. "Who sneaks 'Duluth' into a song lyric?" asked Wildo about Halfway to the Moon. The Fee megaphone gives me flashbacks to college and listening to Junta nonstop. The Wedge always pops up in Colorado, and I always think of Colorado when they play it elsewhere. Typical ripcord Halley's (I had set the o/u at 5:15). "How they end Bathtub Gin will tell me everything I need to know about how tonight's show will end up," said Jonas. Gin jam was a much safer exploration (versus their dissonance gamble in Tahoe). Trey played more rhythm guitar than lead (a theme for the entire weekend), while Page and Fish were pushing the jam. Sometimes there's a huge (power) vacuum when Trey takes a  passive approach and sits back and let's others try to take the lead, but during entire Dicks run Page and Fish jumped into action when Trey deferred to them. Gin ended on a positive note (check out 9:30 to 11:30), so Jonas and I took that as a good omen for the rest of the show (and the run). Bouncin was a Pauly Takes a Piss Song. Mound is when the CIA tests to see if Phish has properly brainwashed the audience. Page had a sick solo at the end of Gumbo. My bud Rob and Azzman were seeing their 50th show. Rob really wanted to hear Gumbo, and he got it. Yeah, Gumbo-Antelope is how you end a set. Antelope was a heat-seeking missile. Gavin wore the disco ball helmet and I pelted him with glowsticks all night. He was such an easy target.

Chalkdust set opener was out-of-the-box. The band relied on DWD or a cover as a launching pad for set 2 (this summer's examples included Energy, Crosseyed, Golden Age, and Rock and Roll). I thought the 2012 Atlanta Lakewood Chalkdust > What's the Use was my favorite non-traditional Chalkdust in 3.0.  I was stoked to see the boys took a shot with opening up a "greatest hits" song. But yeah, I'll always remember this Dicks run because of the 23-minute Chalkdust. Pretty rad. That's the kind of Phish I want to see. I don't go for the hits. I follow them all over America to catch a glimpse of uncharted territory and musical exploration in the farthest corners of the universe. I'm fortunate the last couple summer to witness musical gems like 2012 Long Beach Rock and Roll, 2012 Dicks Light, 2013 Hollywood Hood, 2013 Tahoe Tweezer. And you can add the Dicks Chalkdust to that glorious collection of shiny cosmic jams. Check out the Phish Maps for Chalkdust. It's a couple of mini-jams including spacey blues to Latin-Afro rumpus. Light was super short. They were all jammed  out after Chalkdust. The band showed restraint the rest of the set with compact versions of Light, 46 Days, Steam, 2001, and even Tweezer. They could have opened up any of those songs, but kept everything short and sweet. We got the 2001 Saturday night dance party we were waiting for. I love watching my friends during the moment they realize their favorite song is being played. Pure transformation of joy. Thrilled that my girlfriend heard her favorite song (2001). Jonas was pumped for Tweezer... his favorite song... but he felt everyone needed to move on from the Tahoe Tweezer. Accidentally took huge swig of vodka, thought it was lemonade. Encore was On the Road Again. Trey mentioning how he was happy to get back on the road for a fall tour. Another FTP cover. Jonas thought they'd save Tweeprise for Sunday. Nope. 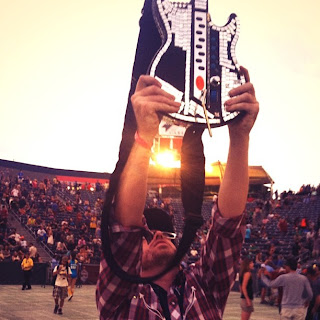 Last show of the run. Last show of summer tour. The third straight night we stayed up til dawn. Barely slept. Dragged ass. Denver Biscuit Company saved us. Hopped back on the party bus for the last night. As expected, Sunday was "do all your drugs" buffet show and everyone was spun pretty hard, or super tired and running on reserve energy.

I dig random openers, like ASIHTOS. Matty wore devil wings. During pre-party, I told him Phish would play KDF as the second song. I was half-joking, half-serious. Rocky Mountain funk with Back on the Train. I could hear Meat at every show. First set loaded with old school delights: Rift, Ice, Guleah, Cavern, and Bowie. Angelic Divided Sky is the church of Phish. Performed on a Sunday too. Bowie is CK5's favorite song. I ran into Phortin in Shakedown and asked him "Bowie or Maze tonight?" He said, "Bowie." I said, "How 'bout both?" Too bad we only got one. I was down on Bowie in 3.0. Really thought they often phoned it in and didn't do the song justice anymore, but they're winning me back after a few goodies this summer. Rob was impressed with Dicks' Bowie. "Much cleaner than usual," he noted.

Carini kicked off the second set. Light/fluffy jam was not typical dark/dirty like Carini's M.O. . If I just played you the Carini jam, you would never guess that Carini was the launching pad. Birds and Golden Age were on  short leash. So Golden got pushed back instead of its usual slot as the set opener? Piper jam was stupendous, but the woos were a little iffy. Wildo shook his head in disbelief. He's the biggest anti-woo person in our crew. I don't like it when the crowd forced it (e.g. Bill Graham Reba), but if Trey is actively baiting the crowd and extracting it out of us. So be it.. Ya know, surrender to the flow.... blah blah blah. Smirked for the lil Guy Forget insertion in the middle of Piper. Stevie Wonder's Boogie On also short/sweet. I jumped up and down at the prospect of I Saw It Again. Love the songs about aliens. The lunchmeat in Mike's Groove was a cover of Legalize It. That was Phish's rare moment of political commentary. Almost fell over laughing when Page sang "Some call it 'Sour Diesel'..." Leo is a stoner, kangfirmed. Someone on Twitter referred to Show of Life as "Show of Meh." Bring the LULZ. Trey went to Suzy to inject some craziness into the crowd to end the set. Bong-rattling Zero ended the set. I was greedy. I wanted a two-song encore. But Zero was it. The boys understand show business... they left everyone wanting more. Perfect way to keep everyone jonesin' for several weeks before fall tour kicks off at the Mothership in Hampton.


****
Colorado is the definition of fun. No matter what, I always rage it up in Colorado with my friends. Phish playing three shows is a bonus. Dicks is a worthy venue because tickets are not that tough to find and GA makes it easy to hang out with your friends without any problems. Plus, Shakedown is an insane scene. The crowd in Colorado is always groovy and jacked up on multiple party favors, so the band feeds off the schwilliness of the crowd and vice versa. Everyone loves Dicks.

Don't forget to check out the Wook Patrol podcasts we recorded over the weekend.

PhishyPaul said…
Damn, That's my crew behind you to your left. Gotta keep my head up next time. We were Page/Rage side every night, in pretty much the same spot.
9/08/2013 10:23 PM

magnifictraining said…
This site has been very useful to us to stay up to date with our training. We would definitely recommend you as one of the top informative news blogs for big data! Keep up the great work & Thanks! -
Hadoop training