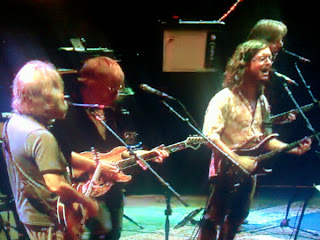 The gang at Furthur decided to play every song from Workingman's Dead in addition to some other tunes for their late night set at the Lockn festival. Rumors were bouncin' around everywhere that Big Red would sit in with Bobby and Phil. Don't forget Trey Band was a last minute addition to Lockn. Trey was filling in for Neil Young and Crazyhorse, who had to cancel their appearance because Poncho broke his hand. Anyway, the crew at Coventry got a tip (thanks to superstar Carrie for providing us with the backstage intel) that Trey was sitting in. I didn't believe it until Trey walked onstage. Trey showed up for Casey Jones and never left the stage.

Well, we know one thing that can slow Trey down.

Thanks for pointing that missing Boogie out. Fixing now....