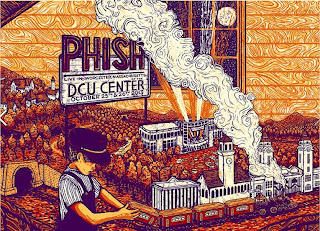 Put on a pot of chowdah and grab some heady lobstah rolls. After a one-night breather, the boys are hitting Worcester, Mass. for a two-night run. Webcast? Survey says no, but there's usually a feed to be found on Hoodstream. And as always, hit up Coventry's Twitter and Instagram feeds for live updates from Pauly.

Set 1: Funky Bitch, Wolfman's Brotha, Wilson, The Curtain With, Cities, Rift, Free, My Mind's Got a Mind of its Own, Vultures, 46 Days 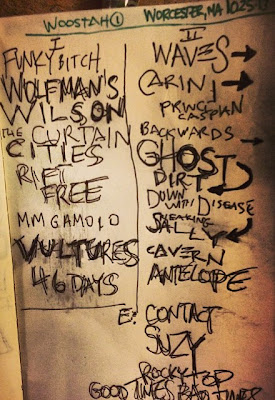 Took the train from NYC to Albany. Big Sis Lori (aka IronGirl) picked me up and we drove to Worcester. Shakedown was overrun by nitrous mongers. All balloons. Everywhere. Once again, the dark side of the force took over a segment of the lot and ran amok.

Fink is the Man! He upgraded our tickets from 200-level seats to Sec 102, right off the floor. Sold my extras for $50 each. Dunno why DCU Center blocks out the first two rows, but because of that strange policy, Row C was actually the first row. For a second show in a row, my crew had the first row off the floor and we caught Phish in a minor league hockey rink. Compared to Glen Falls CC, Worcester looked massive. Lots of rail jumpers appeared when the lights went down. Saw one wook leap 20+ feet down to the floor. Amazing. Flying wooks.

10-song first set anchored by Wolfman's Brah in the 2-hole, which featured a basic funk vamp that got everyone (band included) in the proper mood for the evening. I wagered on a Wilson opener (since Roch-Vegas), but Trey held off on his wank anthem until Worcester. This thunderous Wilson was dedicated to Trey's high school buddies. The Curtain With is always a beautiful piece of music and made me wonder: When is Phish going to write a new instrumental? Been a while. Cities was short and sweet. Lori felt a Free opener was on deck, but they pushed it to the middle of the set. Rare version of MMGAMOIO (seemed like the boys played it every other show in 1999). Vultures got hijacked by anxious Woo-heads. I caught a couple of smoking renditions of 46 Days in 3.0 which the band used as a launching pad and a late-first set jam vehicle, but this one was a quickie that ended a short opening set.

Super-mellow Waves kicked off the second set. Coupled with Carini, the boys served up a nice mind-bending set for anyone cooking on quality shrooms and/or other psychedelics. The end of Carini got lathered in plinko sauce. I lost interest during Caspian-Backwards, but finally got lured back into the mix at the end of Backwards. The Ghost jam peaked with a waterfall of notes by Big Red and those intense bright CK5 lights that illuminate the entire arena. It never really ended but Trey started whistling the intro to Dirt. Now that's a slow tune I can get behind. Mid-set DWD featured the return of Roid-Rage Gordo, who was flexing his guns all set. Did the band get bored with the DWD jam? It petered off and just when it almost died out completely, the room nearly exploded with the opening notes to Sneaking Sally from the Alley. Serious Page clav milkage. When Leo stands up, we get down. One of the peak crowd energy moments of the night (and the tour thus far). A jacked-up Cavern-Antelope double dip closed the set.

I'm very critical of Phish's encores, especially when they cheese out with a Show of Life turd. We know Phish is capable of pulling off crazy shenanigans for their encores, which is why it's disappointing when they finish off a smoking show with a "meh" encore. Friday was NOT one of those nights. Phish topped the first night at Worcester with a four-song encore (Contact, Suzy, Rocky Top, and Good Times Bad Times). Two of them were covers -- Zeppelin's bong-rattling GTBT and the traditional Tennessee anthem Rocky Top. Javier had a theory that whenever Phish busted out Rocky Top, that was their way of giving the show their stamp of approval. One thing is for sure... the band was having a legit blast the last two nights (three out of the last four if you count Sunday Hampton). When the band has fun, we have fun.

These are not the droids you're looking for...

thanks Pauly Hope you're having a blast. P.S. zip up those bad boys

I can't win. Don't zip them, I get complaints. If I zip them, then someone begs for non-zips.

You're on tour. We're not. I'd say you already won.

Dr. Pauly, I will NEVER complain. I will THANK YOU for your brilliant recaps that let me feel as though I am experiencing the music... however you post it is FINE with me.