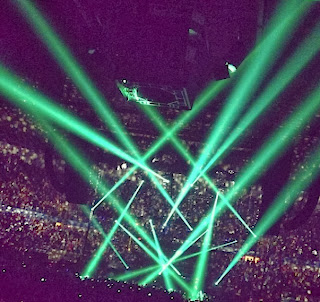 Ready for Round 2 in Woostah?

** with Kenwood Bernard on drums 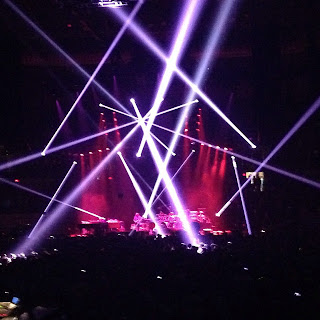 Another wild night in Worcester. The nitrous mooks were playing lot chess with local po-po. Saw one trooper bust a tank and he knocked a knob off. Nitrous shot into the air. One drunk tried to put his face over it.

Went to show with big sis Lori. Ran into PhanArt. Shakedown super packed and claustrophobic. Sold an extra to Unolker. Bumped into T in the lot (again). Got upgraded tix via Fink again. Same section 102, same seats as Friday night! Saw more flying wooks leaping 20 feet from adjacent section trying to get on floor. Much more packed. More folks sneaking on the floor.

Fun night but I was schwilly so might not be best judge of overall quality. Then again, all my friends who didn't go to the show listened to the second set and they were gushing about it. I finally listened to the highlights and it stands up under a re-listen.

Leo gave everyone updates on the World Series at the start of set 2. Drowned > Light was a trippy beginning to a psychedelic dance party. The last few Lights were
on a short leash. Trey shredded the hell out of Sand. Mellow Theme and I was so schwilly I spent the first half of the song digging thru my packed pockets in search of a lighter. Turned out it was in my front pocket. Fink reminded me about the Mikes Groove with No Quarter sandwich from Dick's... and the boys delivered another scintillating performance. So damn glad they didn't run out of gas in the last part of the set.

Although I dig Kenwood Bernard, he wasn't sync'd with the rest of the band. Maybe a jazz cover woulda been better?Alas, Boogie On and Possum didn't pack the same nut-busting punch as if could have with Fish. Yeah, I was let down with the encore but the rest of the second set was all smoke. Heat. En fuego. Fire.

Phish tore up Worcester. Two-night rager. Seven shows in the books. Hampton 3, Glen Falls & Worcester 2 were among my favorite nights this fall tour.