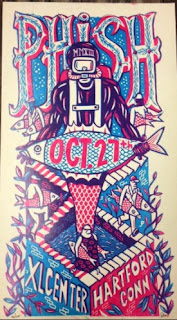 Welcome to Hartford, Phishkids! Please keep your arms and legs inside the train. Watch out for flying w00ks and don't spend all your gas money on balloons. 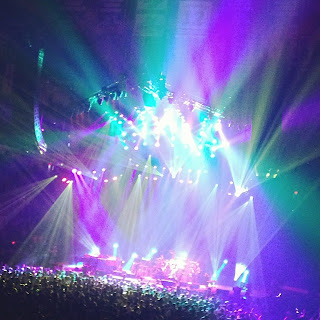 IronGirl and I arrived in Hartford rather early. Short drive from Worcester. We parked in a lot a few block from the old Civic Center, which is my Dead history is correct, it was the last place that St. Stephen was performed. Historic venue where the old Hartford Whalers used to play. Trey even mentioned about how he caught many concerts inside the same building during his high school days (at Taft), so it had a little extra special sentiment for him.

The venue was chill but the cops were herding us around like cattle. Glen Falls was majestic and we were welcomed there, whereas Hartford was the opposite vibe. Usually the lot scene at the Hartford Meadows is insanely raging, but the scene around the venue downtown was unwelcoming and scattered throughout a few smaller lots. I had a homeless dude in an Izod sweater accuse me of being a plain clothes cop. Javier and the CT crew had a room at the hotel attached to the venue, so due to a bunk lot scene, we prepartied in the room. I got a lil schwilly before I even left for the show, so I knew I was in for one of those wild nights. Heck, whenever Igor (aka the infamous cactus dust dude) shows up at a show, I know I'm gonna get blitzed. He even gave me a present... an unknown rock of what he thought was brown mahl.

Lou Reed passed away earlier in the day so it was a given that Phish was going to play tribute to Lou. But what song? The odds on favorite was Rock and Roll (Velvet Underground), but I wanted to hear Sweet Jane or Oh Sweet Nuthin. Javier joked that he'd like to hear Heroin. Phish decided to open with Rock & Roll, which was often a second set opener and something they had played a few shows earlier in Glen Falls. They knew they could play it well, so they went with that instead of something they had never played before (like a non-Velvet's tune like Dirty Blvd. or something they had not practiced like Sweet Jane).

Has it been almost 15 years since the Loaded Halloween show in Vegas? Any chance the band wears the same costume twice? I'm guilty of recycling old costumes. I think I'd rather hear Loaded a second time (albeit 15 years apart by a entirely different band -- 3.0 Phish vs. 1.0 Phish) than see them struggle with My Bloody Valentine.

Rock and Roll rocked. The crowded chanted "Looooooooooooooo!" when the song ended. Then Trey launched into Ocelot, which is a song about Oxycontin abuse, or what is essentially synthetic heroin. So Javier got post-rehab Trey's version of Lou Reed's junkie anthem Heroin. Another quickie Tube, followed by Halfway to the Moon, which gets better with every version, yet still needs a lil more work. Obviously Page digs it. Javier had not seen Fee in what he thought was forever. Maze didn't drag us down the rabbit hole. Lawn Boy was the moment Page locked up post-show booty. Nellie Kane? If we're getting served up country shit, I'd rather hear MMGAMOIO or how about a Johnny Cash cover? NICU was short and sweet. The first set ended with a double dip of 2.0 songs: A Song I Heard the Ocean Sing and Walls of the Cave. ASIHTOS was a little rusty, but brief. I wanted to hear Walls, but it lacked the same punch as versions I caught this summer.

I was sitting on the bend in the middle of the lower section, but I joined IronGirl for the second set. She was ten rows off the floor, but dead center behind CK5. Amazing view and I posted a couple of vines that included the "waterfall lights" by CK5 and 2001.

For a second night in a row, the second set was very strong. Standard yet interesting choice for a Chalkdust set opener. Tweezer was 17+ minutes of unadulterated bliss. Birds didn't really standout much but the set was anchored by an insanely sick Golden Age. Just when I thought they were overplaying that cover, they obliterated the Golden jam out. Halley's got ripchored in favor of 2001, but it was another titillating and ass shaking 2001 dance party. Fluffhead was a high-energy crowd pleaser, while a sublime Slave tickled this jaded vet's soul.

I can't recall how many times I've seen a Loving Cup > Tweeprize encore. I'd say at least a dozen times. But it never gets old. High energy. Full blown wankage. Tons of fun. Much better encore than the previous evening.

Post-show, the lot scene was super weak. I saw a cop screaming at Phish kids, "Go home! get out of here! Go. The. Fuck. Home!" Too bad Phish did not play Glen Falls again. Loved that vibe. Hartford is a sketchy city and phans were like cockroaches were scattering around the side streets the rest of the night.

The quote of the night came from Igor: "It's stupid to do Special K, blow and Molly all at the same time. You can't blast off. That's the kinda shit that killed Elvis."

Eight shows in the books. I'm getting old. I can't handle 8 shows in 10 days like I used to! I'm taking off Reading show, but I'll hop back on tour for AC. See you on the Boardwalk.
Labels: Phish Phish Fall Tour 2013 Phish Setlists

spencer said…
zip'd or unzip'd, let's be grateful that we're even able to obtain these links from the good Dr (or others); in the meantime, enjoy the aud recording :

jonas0tt0 said…
Pauly doesnt really go to the shows. He usually just goes over to Mr. Miner's mom's house for couch tour and they have "Phish blogging sessions".
10/28/2013 5:00 PM

Be patient, or y'all will ruin things for everyone. I prefer zips but will take whatevs is easiest.

Unknown said…
Seriously, ENOUGH with the groveling. You've got a 16 digit code to unlock the shows immediately after they are available (aka your Visa card). Be thankful for the crew bringing it to the masses, and just say THANKS!

The Kids Under the Carpet and the Purple Humpedback Whale said…
Dr. Pauly,

Don't mean to be debbie downer, but the zip file for Set II is missing the Loving Cup Encore.

Get professional trading signals delivered to your cell phone every day.