Guest Post by Fink -- Song of the Year: Carini vs. Tweezer, Part 1

Fink Magazines Phight of the Year: The battle being staged for Song of the Year between Carini and Tweezer 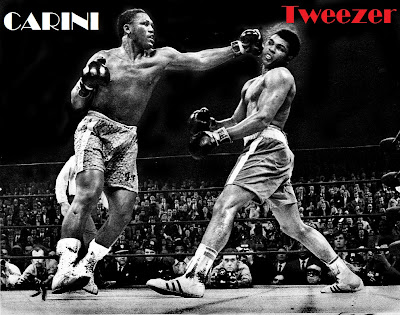 The battle for Song of the Year is coming down to the last round, staged at one of the most historic fighting venues in history – Madison Square Garden. The list of boxers and classic fights that have been waged in the Garden is staggering, including "The Fight Of the Century" between Muhammad Ali and Joe Frazier. We will be able to conclude one of the greatest phights ever witnessed this December when Carini and Tweezer presumably step into the (freezer) ring one more time for one final round, each we hope delivering yet another Mike Tyson-esque uppercut that will absolutely melt our faces.

This epic battle started at the Garden in December 2012 when Carini and Tweezer stepped into the ring for one last time in 2012. Carini and Tweezer threw enormous punches delivering easily the best two songs played during the 2012 MSG run. Each of those particular versions is in contention for 2012 Song of the Year. That ended up being a precursor of what was to come, so for our Phight of the Year we will consider that the first round. It was a bloody battle with two championship songs delivering dominant versions. And it was only the beginning.

In the other corner, you have Tweezer. Tweezer is the most consistent, go-to jam vehicle in all of Phishtory. Every single year of Phish (even the dark Oxy ones – see 2/28/03) has at least one amazing Tweezer. Anytime you hear Trey play those guitar licks, the crowd goes nuts. A show is typically made or broken depending upon how the Tweezer goes. Tweezer is relatively an old man, having made is debut in the ring in 1990. Tweezer is a beast. He is a champion. He is Ali. He is the greatest of all time. He holds the belt. He is in the hall of fame. He will be tough to be beat.

12/30/12 MSG. Such a dark and dirty Carini. Carini hasn’t been played this nasty and evil since MSG. In some ways, I think Phish is almost too happy and in too good a place to play dark and dirty versions of songs anymore. This is an exception. Practicing Black Sabbath really seemed to help them make her an evil bitch again. One of my favorite Phish jams ever. She is in a bad place, her pimp/sugar daddy just dumped her. This Carini starts chasing the dragon. Not only does she do heroin, this Carini is heroin. If you listen just even once, you will be hooked for life. She is so dark and evil we got number-lined afterwards, and it might be the only time it was OK to be number-lined. The abrupt happy song about all of our friends was necessary because we were down the fucking wormhole with Carini, and she was hard-core addicted to smack.

7/6/13 SPAC. Other than the 46 days -> Steam segue, this is probably the best piece of music of the entire SPAC run. This version is almost the exact polar opposite of the 12/30/12 Carini. Such a beautiful piece of improvised yet composed music. A happy Carini, she is outdoors, playful, smiling and running around with a shit-eating grin. She quit the goods, lost her winter weight, sobered up and has been exercising. This Carini is looking good, feeling good, (meatstick) teasing all the boys. This Carini escaped her 12/30 pimp and is ready for summer loving. She is so happy, she enjoys contemplating the Architect and what it all means immediately after finishing up this version.


7/30/13 Tahoe. Carini was so blissed-out after SPAC we didnt see her again for 2 weeks. Lord knows she was having a good time. But when she decided to come out and play, she was still really happy, not as newly happy as at SPAC but very content. She comes out of a great Ghost, she is in a more transitional phase. I believe this Carini was in the midst a relationship. I see her skipping around the playground when I listen to this version. Slow drop and she grabs Pipers hand and they go off to play. Ghost -> Carini -> Piper. This show often gets overlooked and as a complete show is better than the next night, but that was the night of Tahoe Tweezer. More on that later.

8/04/13 Bill Graham. A playful version, totally Phishy. She starts jumping up and down a bit, mixing in Fluffhead-ish lyrics. This Carini is still really happy. She is having a great summer, still hasn't touched the heroin again but is probably partaking in the incredible weed in San Francisco. She enjoyed being outside in her sundress all summer but really enjoyed escaping the heat and coming inside to play for a bit. Shortest version of year but still solid. You can hear a bit of the darkness coming back. Slows down at the end and she starts to get in her car on the highway to the great divide.

9/01/13 Dicks. Closing out her summer of love in style, this Carini was given the vaunted second set opener slot for the final run of the summer. She deserved it. She earned it. And the boys rewarded her with the most important spot in the line-up for the tour closer. Carini still managed to deliver despite this being an overall off night of Phish (to me anyway). This Carini was taking a bow. She had a great, happy and joyful summer and was going to show herself off. She strutted around the stage shaking her ass getting us all off. Just another great version, this one flew into Birds.

10/18/13 Hampton. One of the best Carini’s of the year. Carini broke up with her boyfriend and is now slutting around town sleeping with everyone in site. She is no longer making love, this Carini is downright fucking. She is a dirty whore again. She has a couple of threesomes with the Allman Brothers, fools around with a girl named Piper, makes Quinn fall in love with her and leaves him cold. This Carini is loving her freedom after the summer of (89) love. Trey starts that scratching on the guitar and its Carini, the slut, strutting her camel walk, getting ready to go out on the town, moving her body with rhythmic procession. This is my kind of Carini. But then her dad walked in on Carini and Quinn going at it with the funk and we got number-lined. Worst blue balls ever.

10/25/13 Woostah. This Carini comes out of the best Waves in 3.0. What an incredible pairing. Wine and cheese. PB and jelly. Phish and sex. Coming out of this beautiful, psychedelic, incredible, majestic, rocking Waves maybe Carini found love and happiness again? Not a chance. She is still a whore. This is another slutty fall version. Carini gets dirty indoors. You can move your body to this Carini. You can get down with this Carini. This Carini is seductive. She has us wound around her finger. This Carini is a seductress. Watch-out for this one, if you aren’t careful Carini’s gonna get you. You can run onto the stage, but don’t let Carini get you. No segue on this one, just an after sex smoke with Prince Caspian.

10/31/13 Atlantic City. Similar to Tahoe, she makes an appearance out of Ghost. Similar to Woostah, another great pairing. This is quite possibly the best jam Phish played in 2013 and nobody is really talking about it. I don’t understand why. Possibly because everyone is so focused on Wingsuit from the set before? But seriously this jam is sofa king good. 20 minutes of pure phish greatness. I really love this version. Phish just finished the historic Wingsuit set and a huge weight was lifted off of their shoulders. If we are talking about getting loose and Phish in the fall, then Carini is your girl. This Carini is stunning, even if she is an AC crack whore. I am in love with this Carini. I am chasing her around Boardwalk Hall trying to grab her but she continues to allude me. This Carini has it all. I hear so much Slave in this song. This Carini builds and builds and builds to such a beautiful climax and then brings us down with such gentle precision. This Carini is finishing up her fall tour having whored all around town, leaving a trail of broken hearts behind. However in the end she is still so special and beautiful and amazing and incredible. This Carini is dirty and beautiful. This Carini is a vixen. I truly love this Carini, even after all of the nonsense she still has such a big and beautiful heart. This is my favorite jam from the fall. The boys take a well-deserved break after this Carini, she doesn’t go anywhere. She should take a bow before they start Birds. Thank you Phish. The Best. Band. In. The. World.

Coming soon.... Part 2: Tweezer, his wallet is the one that says bad mother fucker on it.


Guest post by Fink... our good pal from San Diego. Check out other guest posts by Fink. He wrote reviews of this summer's run at SPAC and his thoughts on the new Phish songs from Wingsuit.
Posted by Pauly at 4:20 AM

I smell fight card style T Shirts for MSG! Love me some Fink!

If you need your ex-girlfriend or ex-boyfriend to come crawling back to you on their knees (even if they're dating somebody else now) you need to watch this video
right away...

(VIDEO) Text Your Ex Back?