Editor's Note: Hello all... it's been a week since Phish threw us a curveball and performed 12 new songs for their Halloween album. Our pal, Fink, shared his thoughts on each song. Enjoy, Pauly 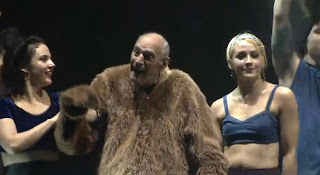 After multiple spins off Wingsuit, my initial thoughts are below. Note that I loved they played a new album for Halloween, I had such a fascinating and interesting experience listening with everyone to songs we have never heard, love the idea they are forming new music with the audience. It was a very special evening. I also want to note that these obviously aren't complete songs yet. Like all albums, some songs are good and some songs aren't. Not all of these tracks are good. ("That's just like your opinion, man.") I really find it interesting that most of the songs have a poppy repeating-like line. Also all the harmonization I noticed on fall tour was obviously them working on all of the vocals for these songs. There are a lot - like a lot a lot - of vocals.


1. Wingsuit. Will be sticking around for sure. Title track. Needs a lite bit of work. But really a beautiful song/idea for a song. Note that you can win a us open shooting par. Repeating line: Put your wingsuit on / It feels good. This song is sticking around. Excited to see its growth.

2. Fuego. Easily top 3 song on album for me. Jam potential for sure. This will be in the Phish rotation forever. Lots of interesting thematic changes. Repeating line: Inside your Fuego / we keep it rollin. Note that I will be yelling "San" during this song before the Diego part for hometown love. Apologize in advance. Can't figure out where the jams are from. Need to listen closer but any leads would be appreciated.

3. The Line. I like this song. Think it will be sticking around and easily make the new album. Might even have best opportunity for mainstream success based on lyrics, sports analogy. Repeater: Oh oh oh / Circle getting smaller, step to the line.

4. Monica. Another great song. Will be interesting to hear electrically. Like the back and forth lyrics between page and Trey early. Should be more of this. Repeater: Sing sing Monica, sing Monica. Think "Sing sing Monica" will become crowd sing along. Another really solid tune.

5. Waiting All Night. To me, crappy song. Really annoys me. Don't like lyrics, don't like vibe of song. In an album of repeating lyrics how many times do we need to hear waiting all night? What's the point of the mike bass drop? Again my opinion. Repeater: Waiting all night. Meh.

6. Wombat. Phunk yeah. My favorite song on the album upon first listen and only getting better. Love the rap aspect of it. This song kicks ass. Can't wait to hear it phunked out deep. Dance your ass off song. Love it. Love the changes, Phishy lyrics, pages work on this song is awesome. So excited for the MSG wombat. Wished they had dropped it again right after the funky theme on Sunday. Repeaters: Wombat, cuddly but muscular (or very similar variant). The new Tube. And it's stupendous.

7. Snow. This song sucks. I really have nothing good at all to say about it. Just look how it destroyed room vibe post wombat. Already know this is a piss song if somehow it makes the album. But doubt it does. Bee gees like harmonizations are not Phish's strength. Give me sun DIEGO to melt this snow.

8. Devotion to a Dream. Like the beat at the start. Then kind of boring. Not a huge fan of the lyrics. Don't like the it's today (insert phrase here ____) parts. This is a song that I like the music to but not a big fan of the lyrics. Again one man's opinion. However once the lyrics are over the jam part of the song is really good. Where is this from? Totally recognizable. Kind of a back on the train sound. Anyone? Love the jam, meh on the lyrics and singing.

9. 555. Really dig this bluesy number. Been liking the mike songs somewhat lately. Never thought I would say that. Kind of has an old classic rock sounds. Big fan of 555, especially since they bring back 8/19/12 San Francisco jam at the end. Not sure it exactly fits but really love that jam so much. Should the bluesy number end with the 8/19 explosion? Seems a bit tempered here. Side note: apparently 555 was Gordo's voicemail code and that's the inside joke on the title.

10. Winterqueen. I like this song. But it's so TAB. I really enjoy some of the Trey guitar licks later in the song -- again recognizable. Well be hearing this one again. But a bit too mellow for my taste. And so TAB.

11. Amidst the Peals of Laughter. I dont like this song. Sorry. Maybe because it's all lyrics and Trey in the beginning? Maybe it's the lack of music? I love Phish jamming the fuxk out. Trey strumming acoustically? Meh. Good song for the next Festival 8 acoustic set. Or again, maybe TAB? Not a fan.

12. You Never Know. I like this song. Weird knowing what it's about. Catchy/poppy song. Repeater: Maybe that bird needed a cage. Probably right in the middle of the songs for me on this album. Like it, don't love it. Again using the different singers' techniques, doing this quite a bit on this album. Think they will like singing about a dude that stole all of their money? Will it stick?

Thanks for reading. I have nothing but love for Phish, they have given us so much. And some of these songs are already incredible. I for one can't wait to see what the new album eventually becomes and even more so what these songs become live. Long live the Phish from Vermont. Thank you. You are the Best. Band. Ever.


Guest post by Fink... our good pal from San Diego. Check out other guest posts by Fink. He wrote reviews of this summer's run at SPAC.
Posted by Pauly at 4:20 AM

Gotta disagree about Waiting All Night. I really dig what's going on there. I seem to be in the minority, but You Never Know is my favorite of the bunch. Devotion To A Dream elicits thoughts of Phish's version of Mike & Leo's Middle of the Road to me. Wingsuit instantly made me think if Floyd from the 1st notes that night. Overall, I love this collection of tunes. Only clunker is Mike's vocals on Snow.

The 555 very likely could be referencing the 555, a type of locomotive train.

Most of the lyrics reference jumping on and off etc.

hmmm, I thought the best song of the set was 'waiting all night.' Has a crafty chord progression and sort of reminds me of a modern theme from bottom. Also loved Page's Keys on the 2 (sounds like he's hitting glass) and is very Bass (Mike) driven. if I had to rank, I'd say for potential. 1. Waiting all night. 2. Wombat 3. 555

The wombat lyric is "crepuscular" -Crepuscular animals are those that are active primarily during twilight, that is during dawn and dusk.
We were laughing so hard in AC that phish had gotten this word (one of my favorite vocabulary words teaching kids about wildlife!) into a song...genius.