"I got heroin, morphine, and Klonapin," said the 50-year old woman with track marks sprinkled over both arms as her scrawny dog wandered around us in circles.

"I'm looking to get up. Not doooooown," I told her as we stood in the middle of Shakedown, with a searing 95-degree heat sending waterfalls of sweat down the sides of my face.

Welcome back to Deer Creek. The first of two shows and first multi-night run at Deer Creek in the 3.0 era. Last year we experienced the monsoon-like weather which flooded our tent. I was bummed out about a solo show last summer, but excited about a double dip this summer.

After five shows in Berkeley and Colorado, the Phish touched down in the Midwest for the first of four shows at the typical Deer Creek > Alpine Valley run. The Joker and the Colorado crew stayed behind in Colorado. I was doing this leg with my girlfriend, Change100 aka Nicky, and the Cincy crew: GMoney, Mr. Fabulous, Iggy, and Meg. Nicky and I arrived late on Wednesday night. We ate Xanax and slept it off. Shit, I had been up for like six days with minimal sleep, so I needed a night off. I crashed hard. My body thanked me immensely.

Iggy and company picked us up and we headed to Cracker Barrel for a team meal. I told them about Telluride, especially the stuff I couldn't write about on the internet. Then we headed to the lot. Mr. Fabulous brought a shade tent which was clutch. We at least had some shelter from the sweltering heat. I headed to Shakedown, the first legit version since tour started. The entire town of Telluride was "Shakedown" and the Greek's location on UC-Berkeley's campus lacked a legit lot scene.

I had a tough time securing any mind-altering favors, but there were plenty of nuggets for sale. I picked up a pair of funky sunglasses at Cracker Barrel and wore those to the show. Everyone was coming up to me on Shakedown looking for molly.

Our old friend Daddy and the Hey Bub Indy crew joined us. I bumped into my poker buddy Jesse on Shakedown. I also reunited with Kentucky Lori and Tracey. The first time I met them was at Deer Creek many moons ago.

A little foreshadowing? I figured Halley's Comet would be a lock because of the meteor shower.

We made our way inside and got to our seats in the Pavilion at 7:55. I sat down and the guys next to me introduced himself as Reed and Andy.

"I've seen that hat before," he said as he pointed up at the Slave Telluride hat that Pep made us. "Are you the Coventry guys?"

I got that comment a lot at Deer Creek. The Joker's disco balls were in high demand, alas, he's currently in rehab in Breckenridge after a long-ass summer of fun. 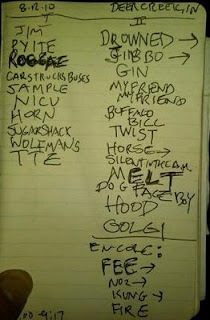 Opener was the standard Runaway Jim. I was hoping for a PYITE opener, but it's really better placed as the second song because the boys shake off any jitters during the opener. Alas, that didn't happen with a few Trey flubs. Page had a cool cool-jazz solo near the end. After Gordon being the MVP of the Telluride show, I was wondering if Deer Creek would be the "Page-heavy" one.

My notes say "trainwreck" next to Roggae. I dig the song, but it was not a pretty version. This was the first sober show for me this tour, so I definitely trust my ears and gut 100%. The start was shaky and they needed to turn it around... pronto. Luckily, Cars Trucks Buses saved the set (at the time). As I tweeted, "No lyrics or segues to fuck up here."

CTB was my personal highlight in the first set with Page leading the charge. It appeared to get the boys back on track. They tossed the heat-exhausted crowd a softball... Sample in a Jar. Huge sing-along tune.

NICU and Horn were solid. Sugar Shack kept me interested, but I wasn't blown away. Wolfman's had a decent jam and for the first time all set, I really felt as though the boys were cooking. I was feeling hopeful with a strong finish to a mediocre set. And then Phish dropped the ball with Time Turns Elastic. A chorus of boos rained down. Angry fans and noobs headed to the pissers. I sat down and relaxed. I chatted with Eddie, who was sitting next to me. He saw over 130 shows and we chatted about Telluride and former highlights that we saw at Deer Creek (like the Moby Dick show).

The more I thought about it, TTE was a major "fuck you" from the band to the audience. The Phish experience is sort of like a mental institute. The doctors (Phish) had to remind the whacked-out patients (us), who was in charge. TTE was a heady reminder that they could come out and play what they want, but instead they do their best to mix it up with new material, bustouts, covers, fan favorites, and classics. You can't please everyone, but Phish really tries.

It's not easy being Phish. It's gotta be harder to be Trey trying to maintain sobriety while being the figurehead of a subculture of rabid fans with an insatiable appetite for music, drugs, and keeping the party going on and on and on.

Trey is not himself. I've been joking that he's back on the sauce, but he's just under too much pressure to be Trey. He's not locked in with everyone else which has been obvious the last few shows, particularly during the first set.

TylerG dropped by at break and told me that the bought a ticket at face and got in as TTE began. I met up with Digg Dugg at setbreak and assured him that the second sets all summer have been very strong. Phish knew they fucked up the first set and they were going to smoke the shit out of the joint when the returned.

"Redemption begins with Drowned," I tweeted. The Who cover opener was a prime indicator that they weren't fucking around. The Gordo-heavy jam sweetly morphed into a mellow Jibboo, which delved into a monster Bathtub Gin. That was the "make-up sex" portion of the show. Yeah, the first set was sort of like getting into a huge fight with your girlfriend and then storming out after an ugly shouting match (aptly put.. TTE). But the Gin jam was sultry, dirty, and outright gnarly. The crowd unleashed a collective orgasm during the first stanza. The Gin jam knocked me on my ass. That's why I go to see Phish. They were trucking down the road of redemption with the first thirty minutes of the set. But could they keep it up?

Dark and sinister My Friend My Friend kept up buzz going before a curveball with Buffalo Bill. Thought a Hood was coming, but we got faked out. Can't complain with that one-two punch. Twist returned to the heavy-jamming theme of the second set. Had a well-placed slow down with Horse > Silent before melting everyone's face with Split Open and Melt. After missing that one in Berkeley and Telluride, I sensed it was coming. I would have preferred to have heard it at the end of Set 1 instead of TTE, but it popped up at the right time and place.

I also saw Dog Faced Boy as an "apology" song, and sort of took that in stride as the band's smoking second set as a mea culpa for that trainwreck in the opening set.

We finally got a Harry Hood after plenty of teases. Solid version and the high-energy fan favorite Golgi ended the set. Yep, first rule of show business is to leave the audience wanting more. How can you achieve that with TTE? But, Hood > Golgi definitely fits the bill.

After a four-song epic encore, redemption had been achieved. My biggest complaint about Phish over the years have been their weak-sauce encores. Thank God they don't end shows with Velvet Cheese anymore. I'm happy whenever I get a multi-tune encore, and when you have a few rare gems? Well, shit, I walk out with a stiff erection.

My friend Lori wanted to hear it... and she got the Fee that she had been chasing for years. I can't recall the last time I saw Fee with a megaphone. Maybe some of you Phish nerds can fill me in. I would have been content with a single Fee encore, but they treated us with a NO2 and Kung before ending the show with Jimi's Fire.

Phish fucked up, got pissed, put the fans in their place, realized what happened, and then made it up to us. After a gut-wrenching beginning, the band ended on a high note at Deer Creek. The boys have been chasing their own ghost this tour (well, shit their entire careers). After a magical Telluride, they were ambushed by even more maniacal spirits during their return to Deer Creek, a vortex of paranormal energy from shows past. The boys got spooked by their own apparitions and it was obvious. They regrouped at setbreak, slaughtered a live chicken backstage and lit some sage before returning for a massive second set and encore.

Last megaphone was Clifford Ball - 8/17/96 according to a tweet reply from Shapsio where I asked him to tell Trey to bring it back.

excellent review, as always. Wish i was there with you guys.