Skip to main content
Labels
Posted by the joker November 02, 2010 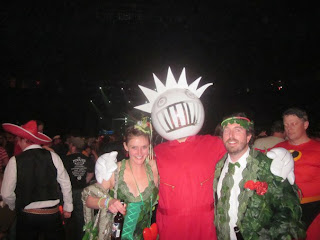 I am all out of vacation time for 2010 and had to stay local for Halloween. Ween played at the 1stBank Center (the same place Phish played earlier in the month) and I had a crazy psychedelic evening.
Check out this review at the Westword. They describe the show much better than I can. This sums it up:

The scene captured the sheer surrealism of Ween's Halloween show at the 1STBANK Center in Broomfield: Toward the end of the band's three-hour performance, Mickey Melchiondo -- aka Dean Ween -- belted out "The Blarney Stone" with gusto, his vocals unencumbered by the massive bunny head sitting atop his shoulders. He adjusted the huge furry headpiece in between singing verses and playing lead guitar; at one point, he commented simply, "Funny bunny."

tele-mon said…
Amazing night, great costumes (I was Cigar Guy), and 3.5 hours of non-stop boognish, whoa! I saw a disco-ball helmet, and a couple of dharma-phish jumpsuits I recognized here at the little pizza bar joint after the show. After a couple of dry Phish shows in Amherst, it was quite a change to be at the liquor-filled 1stDank Center. Deaner is right up there with The Master, but some of Gener's dark songs like Sarah just blew me away. Ween is the shit. If any other kind downloads are out there, please share. I want a sbd of that one!
11/03/2010 7:26 PM