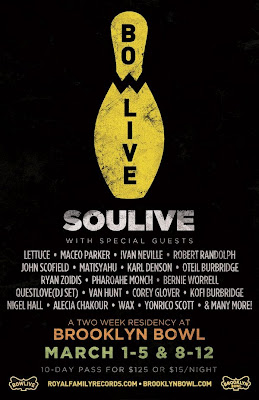 Soulive: Eric Krasno, Alan Evans and Neal Evans return to the Brooklyn Bowl for their second funk-filled residency in two years. This year, musicians as diverse as John Scofield (jazz), to Questlove (hip-hop) to Oteil Burbridge (rock and roll) will be participating. Expect more guest appearances as members of the Allman Brothers Band (of which Oteil is a part) will be in NYC for their residency at the Beacon Theatre and Furthur will be in town with shows at Radio City Music Hall and the Best Buy Theatre.

Tickets are $15 a night or a ten day pass can be had for $125. My friend Meredith attended about half the shows last year and wrote about them extensively over on her Views Skewed Blog.