Trick or treat, Phisheads! Phish is back with their first "musical costume" Halloween show in three years. Will it be My Bloody Valentine? Elton John? Zeppelin? A concert version of Hands on a Hardbody? Is there a clue in the poster? I'm starting to sound like one of those kids on PT.

Tune in to the webcast at 7:30pm ET on Live Phish where they're offering a three-day pass for all the Atlantic City shows. Pauly is somewhere on the Boardwalk at the moment and will be updating from the show on Coventry's Twitter and Instagram feeds. Don't forget, there are three sets tonight, so if you're like me, a west coaster rushing home from the office on the 405 freeway dressed as an ocelot, you should make it home for the all-important second set.

Update (6:45pm ET):  Just heard from Pauly who got a look at the Phishbill. Phish is dressing up as... themselves. The second set will be their new album, Wingsuit. 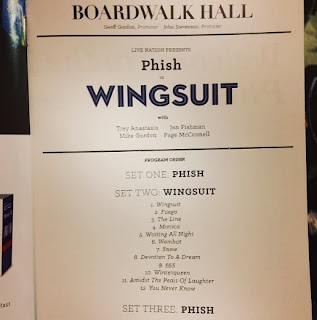 Set 2: Wingsuit, Fuego, The Line, Monica, Waiting All Night, Wombat, Snow, Devotion to a Dream, 555, Winterqueen, Amidst the Peals of Laughter, You Never Know

No sleep. Partying. Gambling. Just like the Daft Punk song. "We're up all night to get lucky." Phish is lucky their phans are understanding and open. Sure, lots of mixed feelings all around but as one friend put it best, "I'd rather hear new Phish than get stuck listening to them cover an album I don't like." All fall tour, I wondered where all the new content was... and I guess now we know why they were saving it.

Another wild ride from NYC to AC courtesy of the CT crew (Igor, Josh, and Javier). No traffic on the Parkway and rolled in at 4:20pm. Welcome back to AC, where the sand turns to gold! Thanks to Pat for hooking me up with a Halloween ticket. Hardest ticket of the year. Pat even showed up in my hotel lobby to drop it off. What an awesome dude.Thanks brah!

I caught this show with Senor, my 1.0 partner in crime. Along with his lil bro Javier, we reprised our first-ever Phishy Halloween experience; we saw Vegas 1998 together and 15 years to the exact date we were in another gambling mecca checking out our favorite band's hijinks. Instead of the genius of Lou Reed, we got the genius of the Phish.

I hung out Page Side all night. Decent sound. Good section. Lots of confused folks. A good percentage thought Phish was punking them and that they would do an actual cover album and not their own material, but by the time they opened with Wingsuit, it was evident that Phish was indeed carrying on with an entire set of new material.

First set was a blur. Lots of nervous anticipation from both the artist and audience. Typical greatest hits first set anchored by heavy-hitters Stash and Bathtub Gin. We never really went too far down the rabbit hole with a dark/deviant Stash and I thought it was funny that Silent in the Morning (another Horse-less Silent) popped up in the clean-up spot. Buffet of funk grooves with MOMA, Back on the Train, and Camelwalk. 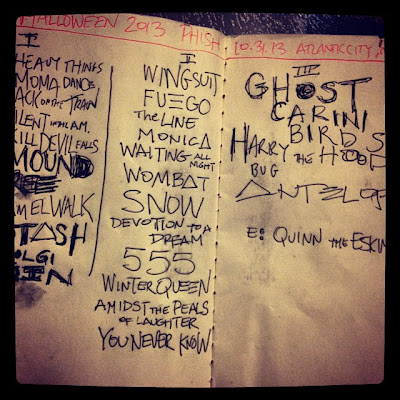 The second set? Phish has always been a quartet of pranksters so they pulled a fast one on us. They never officially announced a cover set so everyone assumed they would bust out a classic album. Social media fueled the rumors. Everything from ZZ Top to Huey Lewis to Elton John and the Allman Brothers. I dig Duane Allman, so I really wanted Eat A Peach, because who doesn't want to hear Phish shred a ginromous 45-minute Mountain Jam for shits and giggles. Alas, they gambled with a risky serving of new material. It really takes titanium balls (plus lots of trust in us, the blood-thirsty zealots) to pull a dozen untested and brand-spanking new songs out of their ass. I probably dug 1/3 of them (Fuego, Wombat and Monica). Another 1/3 needs work. And the other 1/3 didn't stick. But, kudos to Phish for always keeping us on our toes and for delivering much-anticipated new material.

Barney Miller's Abe Vigoda showed up in a bear costume. That was the "Holy shitballs, WTF?" moment of the night. At setbreak, they showed a mini-film with Page and Abe paying homage to The Godfather.

The third set was more to my liking. The boys were playing to my buzz. Everyone knew Ghost was coming. It was mean and ferocious but didn't quite scare me. Carini was what Fink would call a "dirty little whore." But that's how I like my Carini. This particular Hood had a couple of crotch-tickling moments when the entire crowd unleashed a collective orgasm. Love those peak live-show moments. Part of the crowd grumbled with Bug intro. The boys shrugged it off and rocked it out, especially hysterical to watch a tweaker dude in a pink tu-tu and Minnie Mouse ears get down in front of us. Antelope was pure smoke. Sloppy, but all smoke. I felt like I ran three miles while jogging in place during Halloween Antelope. Senor was let down by a single encore tune (Mighty Quinn), even though he's a huge Dylan fan. He was hoping for a 4-song encore like we got in Worcester. Heck, at least a two song double dip? Nope. Just a single cover and the boys rushed off stage.

I have not re-listened to the show, especially the second set. I expect it's going to take a while for these songs to take root, but the seeds have been scattered about. Eager to see what grows and what withers away. It's sort of like unveiling a minor league team. Which one of these prospects will make it to the "show"?

One show down. Two more to go in AC.

Pauly said…
These are not the droids you're looking for.

Iv'e been seeing Phish religiously since '93... Yes, I too am excited that I opted out for this year's Halloween and chose the NYE run instead.

However, Phish takes risks and that is what makes them so special!! They threw convention to the wind last night and gave us 12 new songs to work with... Trust me, it's a lot more challenging to create a new album than cover someone else's!!

Notice how humble and sincere Trey and Page were when they thanked us for their acceptance...

I love this band!!

Al Maven said…
Yep, sendspac is down. Thanks to all for the great grooves.

I watched webcast and was pretty disappointed. Would've been really pissed if I spent all my $$$ to go. Once they started with Wingbutt, I was eagerly hoping for Gamehenge in the 3rd, a la the famous "GameHoist" show from 06/26/94. Alas, I continued to drown my sorrows in pint after pint of Dale's Pale Ale.....

jonas0tt0 said…
I cant see them covering a proper album tonight or tomorrow. The reason is that it would be difficult for them to learn their new album plus a classic album at the same time. That's a lot of material to learn in a short amount of time.
11/01/2013 4:53 PM

MeToo said…
I don't give a shit about the new album. There are 3 "OK" songs on it and the others simply BLOW. I will never put my "WINGSUIT" on just like I will never be a "Submarine". The lyrics on the album are beyond gay and sound like the band is going corporate. I don't need Phish talking about New World Order ever. Talk about some hens, maybe a milk company or being created in a test tube but I could give a shit about the band getting taken for 5million. Wombat is simply gay. Fuego sounds cool until they add lyrics. I could go on and on…….. I"M JUST HAPPY THE BAND IS STILL PLAYING - PISSING IN MY EARS BUT STILL PLAYING
11/02/2013 11:28 AM

Pauly said…
Your constant whining is boring. If you hate this band, then stop listening. All you do is bitch and moan and grovel for links. You add zero to the conversation.
11/02/2013 1:02 PM

tomahawkcounty said…
Dr. Pauly, Thank you, for all you do to bring PHiSH tours home to me when being on the road isn't in my cards. And for your great patience with the children who sometimes cry here.
11/03/2013 10:17 PM

Blogger said…
If you want your ex-girlfriend or ex-boyfriend to come crawling back to you on their knees (no matter why you broke up) you must watch this video
right away...