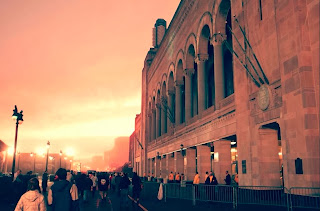 It's Night 2 of the Atlantic City run... don't forget to tune in to tonight's webcast on Live Phish!

E: Sneakin' Sally Through the Alley

No matter what you thought of Halloween, lofty expectations were thrust on the shoulders of the band. if you were dejected by the Halloween selfie by the Phish, then you were anticipating a rager to make up for the controversial Halloween stunt. And if you were thrilled with Halloween, then you figured the band was relaxed and going into the next show with a massive burden lifted from their shoulders. One thing was for certain, when the band is loose and having fun, that infectious vibe spills over into the crowd. That's exactly what went down on Friday night in Atlantic City.

I had a rough first set. A schwilly chick dumped an entire drink on me. Then a bitchy, self-absorbed twat mouthed off to Javier when she stole his seat and he politely called her out. Yeah, location is everything at a Phish show. We had first row (AA) off the floor near the back of the soundboard, but a couple of security guards were posted right in front of us, including one hulking bouncer (who looked like Hank from Breaking Bad) who was getting off busting wooks trying to sneak onto the floor. Despite the added layer of security, both Igor and Josh hopped the wall. One kid paid off a lax guard to sneak onto the floor, only to be tackled by Hank the Hulk. Poor schmuck. The Draconian security detailed finally eased up. I kicked down some dank nugs to this one homie for looking the other way while Javier and I ripped blunts the rest of the show.

Before he jumped the rail, Igor pulled a $5 bill out of his pocket, rolled it up, and offered me a bump. I declined. He buried the Lincoln into a small baggie of Bolivian marching powder and hoover'd half of it in one aggro-snort. "Take another," I egged him on before I told him the coast was clear to jump the wall. 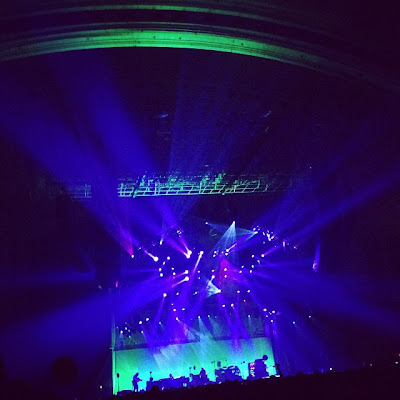 First-set featured an ass-shaking Sand which surprisingly popped up in the three-hole. Too early for a dance party? Never. We got a brief funk orgy with Halley's > Tube yet both were ripcorded. Just when the show was hitting the skids with Circus (Pauly Takes A Piss Song) and Sugar Shack (my least favorite Gordo tune), Jesus saved the set. "Jesus Left Chicago is a much needed catalyst," explained Javier. "Jesus saves!" I proclaimed. My Jewish friends were puzzled with a sudden outburst of the Lord, because I keep my McCatholic upbringing to myself. What can I say... after a weird and uncomfortable set, Jesus and Phish saved me. Finally back on track. Bowie was an exclamation point to the set.

Second set was anchored by a monstrous Twist clocking in at 20+ minutes that included minimal wooing and a corny "Under Pressure" tease with Fishman mumbling Bowie's lyrics. The Twist jam out had a couple of aborted mini-jams, but they kept plugging away until they found a groove they could all agree on. Gotta Jibboo is all about the last two minutes. The enraptured crowd went apeshit. One of those live moments that won't translate to tape. Makisupa Policeman was pure Phish shtick. The keyword was "OG Kush" and Fish/Trey joked around with Kush/Bush inside jokes. Kangfirmed... Trey is a stoner. He's off the Oxy train, but he's sticking to the herb life.

Light is a jam vehicle that has been downgraded in 2013. It's no longer the go-to song for deep space exploration. Sure, there were a couple of juicy versions of Light this summer and fall, but for the most part you never know what you'll get with Light... short and sweet quickie, or some serious sweaty, sultry long-dicking. Chalkdust was all smoke. En fuego. Some shitfaced brah behind us was calling out for "Fuego!" all night. It was funny the first six times and after that I wanted to kick him in the vagina. Meatstick is overplayed but I was so schwilly at that point that it didn't matter. Dug every second of it. I slurped down the Phish Kool-Aid. I'm ready to shave my head, wear flowing robes, and try to convert heathens at the airport to the Church of Phish. The Wedge always reminds me of Colorado and my friends from Denver, especially the Joker (who could not make it this tour, but he was with me in spirit). Last night I heard rapid-fire Slave teases in Ghost, but they saved it for Friday. Ever get that feeling when you think Phish plays a song just for you? I'm sure it was the molly-shroom cocktail, but I got that feeling. A sultry Slave ended the set. A rowdy Sneaking Sally finished off the show. I wandered out to the Boardwalk itching to play cards, but so fucking pumped that we get one more show.

Two down in AC. One more to go.

Thanks, DrPauly, but only the first 4 min of Possum is there...

Pauly, you are inspiration to us all

thank you for all the droids...
can we get the full version of Possum??
it cuts off. :-(