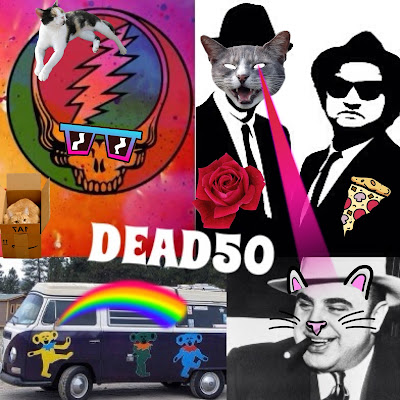 It's Sunday and time for the Dead50 grand finale. The third and final show of the three-night run in Chicago (and fifth overall including Santa Clara). Lots of stuff left on the table. As the saying goes... "Never miss a Sunday show!"

Rock it out on couch tour via MLB stream (On-Demand for 30 days), Nugs.tv, or YouTube.

Here's what went down on Sunday...

Encore 2: Attics of My Life

The fifth and final show and the last show in Chicago. China Cat Sunflower opener. Tad shaky on vocals but wondered when the dynamic duo was going to pop up. I Know You Rider completed the China > Rider one-two punch... Thought they were going to open the show with Estimated Prophet. Weir antics. Dunno if he was simply excited and trying to channel all the emotion of the final show, or if he was straight-up self-medicating. Humorous to see his exaggerated movements like your shitfaced uncle embarrassing himself at the family BBQ... Built to Last was a Pauly Takes A Piss Song. Even G-Money thought it was meh and he loved 80s Dead... Weir attempted slide guitar during the Samson jam out. Weak-sauce drums breakdown at the end. Billy knew they blew it and laughed it off. Billy was rocking the shirt: "Uncle Sam wants you to grow hemp!"... Phil back on vocals for Mountains of the Moon. Rough choice. Trey made up for it and launched into a mini-Moon jam though... Slowed down, faded version of Throwin Stones. Parker said it best that it had the pacing of a post-Drums/Space Jerry ballad, which was out of place for a first set tune. Weir in tears by end of song? He looked like a haggard man who had been alone in a dark room with nothing but his thoughts and a bottle of scotch. No one took the death of Jerry Garcia harder than Bobby. Jerry was our god, but he was Bobby's older brother (Bobby was adopted so Garcia was also Bobby's father figure). Bobby carried the band from the mid-80s on and one day it was all gone. Nothing breaks your heart like losing someone you love to soul-crushing addiction. Plus, he had to carry the burden of survivor's guilt, while knowing you're letting everyone down with your own bad habits...

Setbreak. Anyone try to sneak off and watch "True Detective" via HBOGo? Final setbreak lasted an hour and we got treated to some fireworks before band took stage one last time...The final set kicked off with Truckin' (only the second repeat of the run, which kicked off the Santa Clara shows)... Cassidy and Weir full-cheese factor. Jam went so far off the deep end that I forgot what they were playing and had to ask my girlfriend what song we were on. That's always a good sign if they lose you in a jam... Althea. Didn't think we were going to get it. Typically a first-set tune so at setbreak I gave up on Althea. Oh man. Thrilled it popped up... The Terrapin everyone was waiting for. Trey botched one segment and was visibly irked with himself. Yeah, it wasn't pretty but I'm glad they took a shot at the behemoth... 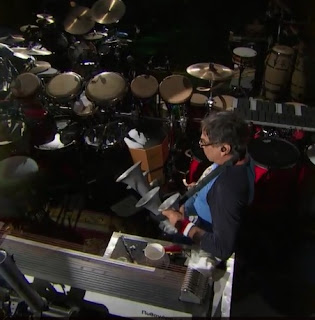 Drums had the tribal rumble thing going on again. Mickey busted out a train horn at one point. "You can't handle that shit on strong acid, man!" Drums/Space bled into Unbroken Chain. Heck of a jam out... Days Between not bad, but slot was questionable when it was the next to last song. Not Fade Away is all about the crowd sing along as we fade to black. One of those epic moments at Dead shows when the crowd chants the lyrics until the start of the encore... I thought they might kick off the entire run in Santa Clara with Touch of Grey, but fitting encore. I used to laugh at Touch of Grey when I was a teenager because the video was an MTV hit, yet now I have grey and white hairs in my beard, so the song hits home... A second encore. With Bobby on acoustic. Attics of My Life. Used to listen to this song a lot in college, but usually it marked the tail end of a psychedelic journey after being up all night and catching the sunrise and when the craziness subsided, it was finally time to call it a night after listening to one last album (American Beauty). On a personal level, Attics was a fitting ending.

Final thoughts on Dead50... On the second night of Santa Clara I mentioned that a lot of what I was experiencing was indescribable. A week later and it still feels like that. If anything, it was great to get re-acquainted with my former self. The Grateful Dead has been around for fifty years and it weaved its way in and out of the duration of my life. Jerry Garcia died before we really got to say goodbye. It's closure for a significant amount of the community. On a personal level, I feel fortunate that I got to celebrate the awesomeness of the Dead one final time.

These are not the droids you are looking for:

Yo Pauly where you pre-gaming ???