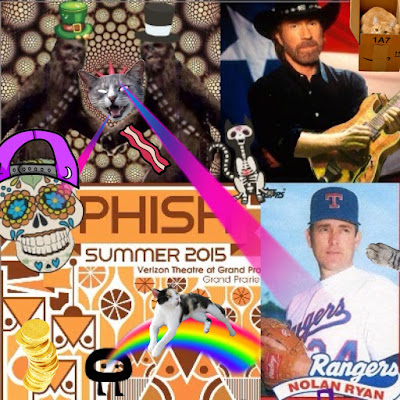 Phish invaded Texas for the second show in two nights. The circus migrated north to the Dallas suburbs. After a sweltering hot night in Austin (link: ATX setlist-recap), the party migrated indoors for an intimate theatre setting.

Follow @CoventryMusic for any updates and the Joker (@neillybop) will also be at the show. We're also on Instagram as CoventryMusic.

FYI... tonight's show will be webcast over at LivePhish. Ticket time is 7:30 CT, so we're anticipating an 8:10 CT start time.

So here's what you missed on Wednesday night... 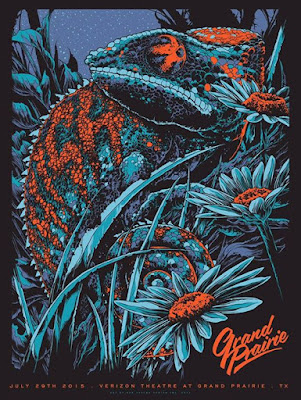 Thrilled to see Phish go nuclear with devastating scorched Earth tactics. That's how you rebound from an off night. The boys from Vermont seriously hightailed it out of Austin after that sub-par gig. Shit happens, but it's how you respond to adversity that defines you as a band. Phish raced up I-35 to the Dallas suburbs and avenged their previous night's turd of a show with a classic heater... The Joker said it 104 degrees. Holy shitballs. Thank God the venue was indoors or Fishman woulda had a stroke... Intimate venue approximate 6.5K capacity. One of the smallest indoor shows in 3.0... Lights went down at  8:15 local time. Trey returned to the KOA after a meh Austin show with his GD50 axe. Musicians are a superstitious brood... Tube opener for Harris? I set O/U at 4:20 and the under barely hit... Guleah Papyrus for Doctor Scotch who had been chasing it a while. He only sees like 5-6 shows a year, so it's tough to catch it since it only gets played like once a year... PYITE. Another "dancing" song. Thought I heard Trey tease a lick before they kicked off Tube... Steam first "modern" song of  set after four early 90s tunes... Poor Heart nod to those country Phish roots... NICU been on the bench considering it's summer tour. Always thrilled to get it back into the mix... I Didn't Know Stage Banter: Trey said he was born 20 minutes away in Fort Worth. Fishman was the best man at Trey's wedding. Gordo still bitter... Stealing Time was high-energy, but felt like the only filler in this upbeat set... Divided Sky indoor versions highly underrated... Squirming Coil set closer. Page thanked everyone and walked off stage at 9:32pm... Another quickie setbreak, this one was barely 30 minutes... Chalkdust opener. Would it be short and sweet, or deep and dark? Went deep. Blissful cosmo explorations before we got an abrupt Trey ripcord... Simple from Bend might have been my favorite jam of the summer thus far. Already a highwater mark had been set. Texas Simple was chugging along when Trey insert the riffs to Silent in the Morning. The rest of the band tried to ignore him before they finally gave in. Trippy Silent... Trey's voice sounded a little scratchy on The Line. Rowdy applause when it ended. DoctorScotch and the Joker both headed to the bathroom. They dubbed it "The Bathroom Line"... Birds liftoff got everyone back to grooving after a lull to end the 3rd quarter. At the end of Birds, someone tossed Trey a shirt with "They Attack" on the front... Fuego time. Odd that the first set did not have a single Fuego tune... Julius is like your coke dealer; you never call him to hang out but you're fucking excited when he shows up at your front door... Hood, high-energy but little sloppy. Hey, that's how I like my Hoods. Trey was in full-blown porn-wank mode, but Page was also tearing it up. Strong and solid 4th quarter. Hood ended the set... I  always wanted to hear more of The Connection (caught the first two Connections at Deer Creek 09 and Miami 09), but it's a perfect summer first set song when the sun is about to go down. I totally understand the frustration from friends at the show hoping for a kick-ass cover or something with a little more gusto. Luckily Connection did not have to anchor the encore... Double dip with First Tube as the second encore tune. Yeah, you didn't think they'd end a good show on a rarely played 2.0 deep cut that they never played in 2.0? Full-blown Trey wankage as per usual... Within context of the sluggish Austin show, Phish bounced back with a sizzler... Both shows in Texas dunzo. Summer tour is six shows old and looks like California got the best two shows thus far. The circus migrates through the dirty South. Next stop, Atlanta.

These are not the droids you are looking for...

Thanks for the up Pauly, you gave me an extra half hour of sleep this morning :-)..off to work I go.

This will make the morning bike ride a lot better. There was some fire scattered throughout this show. Thanks!

I'll fap to that.

Thanks again dude. Totally appreciate it.

@phaser ....you needed a well deserved morning off!

This place is clean and has nice ambiance, more like modern than classic. Our visit was just amazing. I believe it was a treat to be at these event spaces. It would be a treat to attend another event here.