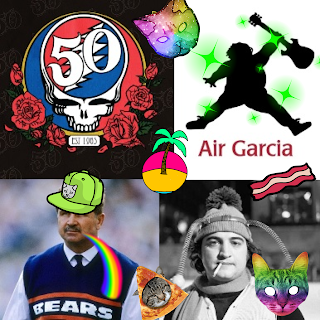 The Daed50 carnival touched down at Solider Field in Chicago. The July 3rd show kicked off the first of three nights of Fare Thee Well.

You can rock it out on couch tour via MLB stream (On-Demand), Nugs.tv, or YouTube.

Box of Rain kicked off the Chicago run and Phil sang right off the bat. That's okay, it's his song afterall... Trey seemed really really relaxed during Jack Straw, whereas he walked on eggshells in Santa Clara... Bertha first time Trey really opened up and he didn't hold back. The other guys showed their age and couldn't keep up. Trey found his breaking point. Reminded me of the first Jurassic Park and the raptors were randomly running into the electric fence to test its weaknesses. Trey's guitar was smugly glancing at Bobby's guitar like a cat that's about to eat a cornered mouse... First glimpse of shit-eating grin on Trey appeared during Passenger. I think the ghost of Ram Rod dosed him... Phil's mic didn't work at one point. Twitter was ablaze with jokes that Shapiro turned down Phil's mic on purpose so he wouldn't sing anymore. Momentum slowly built throughout The Wheel. Trey got so out front of the jam once again, they couldn't keep up. Bruce gave Trey a head nod like "Yeahhhh boooooy, way to smoke these fuckers!"...  Wheel jam smoothly blended into Crazy Fingers with Trey on vocals. Glad Phil didn't sing it but Trey was a tad shaky. Shoulda let Bruce sing that one. Trey made up for it with a torpedo-like solo... Music Never Stopped delivered but where's Donna Jean? Almost seemed like Bobby cockblocked another wildfire solo by Trey. Ah, what comes around goes around. Trey getting little payback karma for ripcording Carini at Dick's last year. 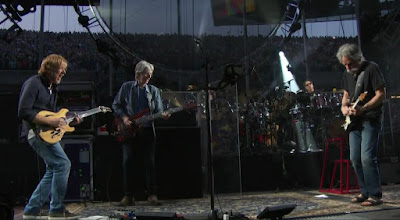 Sun had set and everyone's drugs kicked it for set 2. Dead went way deep into their bag of tricks for Mason's Children and Phil launched both sets with lead vocals... Scarlet > Fire was the reason why Trey got hired for the job. My girlfriend noted that Trey had this orgasmic look on his face like "I can't believe I'm playing Scarlet Begonias with the fucking Dead." Scarlet delivered. Trey took off and never looked back. I always thought Phish ripped off Meatstick's melody from Fire on the Mountain. And man, did Bruce sing an awesome Meatstick. Seemed like only the drummers and Jeff could keep up with Trey when he launched into different orbit on jams, whereas Phil/Bobby/Bruce seemed lost in space... During the second set, Mickey Hart looked like a bag man for the mob with his shades, hoodie, gloves, and mallets. All he needed was a ski mask and we can go bust some kneecaps... Drums/Space birthed the rarely-played New Potato Caboose... Grooving rendition of Playin... I'm not the biggest Bobby fan, so Let It Grow was a Pauly Takes A Piss Break Song. I got back in time for the ripping solo by Trey... Then we finally got the Help > Slip > Franklin the world was waiting for. I never expected it to pop up in the same show, let alone same set as Scarlet > Fire. Trey flubbed some lyrics on Help On the Way, which was funny because Jerry notoriously fucked up Franklin's lyrics... Bobby picked up the acoustic for Ripple and I got Jerry goosebumps.

Final thoughts.... I guess Coach Ditka gave Trey a pep talk. Much better performance by Trey. He stepped up and unleashed the beast. Bobby didn't hold him back... too much. Bruce/Trey sang little more too.  After six sets, safe to say they've gotten better with every set.

And NYC Taper has MP3 and Flac of the first set only...

These are not the droids you're looking for...

YoBit lets you to claim FREE COINS from over 100 unique crypto-currencies, you complete a captcha once and claim as many as coins you can from the available offers.

After you make about 20-30 claims, you complete the captcha and proceed to claiming.

You can click on claim as much as 50 times per one captcha.

The coins will safe in your account, and you can convert them to Bitcoins or USD.

If you're trying to BUY bitcoins online, PAXFUL is the best source for bitcoins as it allows buying bitcoins by 100's of different payment methods, such as MoneyGram, Western Union, PayPal, Visa, MasterCard, American Express and they even allow converting your gift cards for bitcoins.

Ever considered maximizing your free bitcoin collections by utilizing a BITCOIN FAUCET ROTATOR?

If you are searching for the ultimate Bitcoin exchange service, then you should use YoBit.