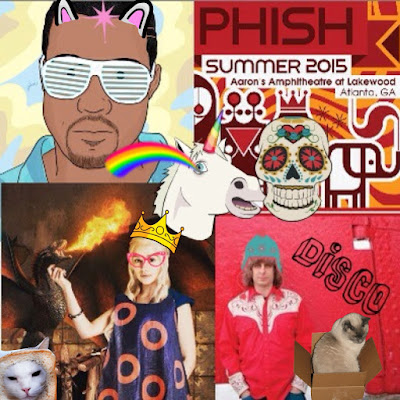 Phish returned to Georgia for two shows at the Lakewood Ampitheatre just on the outskirts of Atlanta. Friday night kicked off the first show of a southern swing.

I lived in Atlanta for four years during college and can attest to the mid-summer debilitating heat. They called the town HOTLANTA for a reason. With the exception of NYC and the Gorge, I never saw more shows in any single city than Atlanta (including the Alpharetta burbs), which had become the epicenter of Phish in the South. For some unknown reason, Phish always brought the heat to Hotlanta. Alas, this weekend was due for a scorcher... At 7:41pm lights went down with Caspian opener. Rare appearance in the one hole. Hey who woulda thought the night they open with Caspian would be a "sick" show, eh? At least we got Prince Fuckah-pants out of the way... Another appearance for No Man's Land. The band obviously digs playing it (third time in seven shows). "I like this," said G-Rob who is always reticent of new material... Ready to get spooked? First set Ghost. Daylight poltergeists in the 404. Initially seemed like a waste so early in the show, but it had the terrifying bite of a second-set Ghost. Early highlight and probably the highwater mark of the opening set... The Wedge flexed its muscles in rare clean-up spot... Moma Dance, usually the second song and instant key bump to keep the early excitement moving along, popped up little later in the set. Ghost/Moma in the same first set? Felt like 1998 all over again. Last time it happened was Shoreline 98 (thanks @dianna_2ns for intel)... How Many People Are You sounded better the second time around. The title reminds me of that hopelessly lost/confused girl you know who constantly changes up their persona every few months... Doctor Scotch was bummed he didn't get Rift in Texas... Mike's Song came out of nowhere (with a monstrous Melt looming). Weird but goofy intro messing around with different tempos. Mike's was definitely its own eccentric animal tonight, like a vodka-drunk whale copulating with a kangaroo on mescaline. Last time Ghost/Mike's in the same first set? The night they opened with 1999 on NYE 98 MSG (thanks @GuyForgetOPT for the intel)... Hey, and they even snuck in Hydrogen... Dank Weekapaug as per usual. Little extra hot sauce on it... Set two opener was Kill Devil Falls and it was a doozy. Digging non-traditional set 2 openers this tour (KDF, Blaze, No Man, Ocean, and even 46 Days). KDF clocked in over 23 minutes (longest in history) and it got spacey real quick. Turbo rocket booster + hyperspace. Wildo described it as "Dead-like." Not even ten minutes into the second set, the Twitterverse dubbed it "Jam of the Night." Contained some serious tunnel-digging grooves. John Holmes deep-dicking... The deep space exploration continued with Martian Monster. Plenty of hijinks with some instrument swapping -- Trey first gave Page a reach around on keys, then he hopped on drums with Gordo while Fish took over bass, then Gordo went on Trey's KOA, and lonely Page noodled around with himself... Twist got spacey fairly quickly but melted away. Seemed like Trey didn't want stuff to get too dark or derivative... Pulled out of the dive for a quickie with Back on the Train. Southern Fried Funk.... Love those second set Rebas, just like @lvnphish said on the stream... No whistling in Reba because they saved it for the intro to Gin... Didn't waste anytime before the Gin jam went sideways and upside down... Another night with a 6-song second set, which is indicative of oodles of jamming and the squelching of ADD Trey... Two-song encore with Farmhouse and Character Zero. The mellow Farmhouse was a set-up for the instant-dynamite with Zero... Strange song placements in the first set but well-executed (single lowlight was the Gordo tune). Atlanta was probably the strongest opening frame all summer (up there with Grand Prairie) anchored by Ghost, meanwhile the second set was mostly killer/no filler from the get go. You can make a solid argument about the cheesed-out (Farmhouse) and vanilla encore (Zero), but I'll gladly take it considering how many times I wandered out of a how with blueballs after Phish smoked the shit out of a joint only to cap off the evening with a weaksauce single snoozer (I'm looking at you Show of Life or Velvet Cheese) of an encore...  Phish destroyed Atlanta according to Anderson Cooper, but I wouldn't trust his journalistic merits tonight; heard he was doing dippies all night with Phishy chicks in sequins sparkly dresses... One down in Atlanta, one more to go.

Thanks again Phaser. Appreciate it. First set was solid. Now on set 2 opener which is also pretty tasty.

Great job as per usual Phaser!

Anybody have a re-up of this? Link expired.