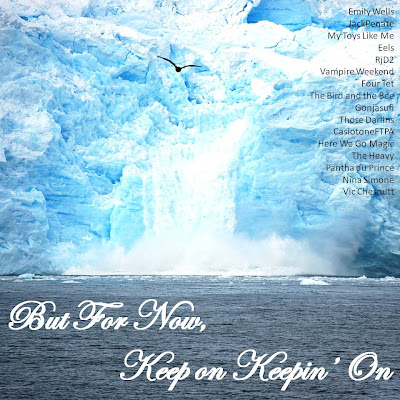 I've been living at the base of the Marr Glacier on Anvers Island, Antarctica, for the past two months and will be for another two months. Hell, today is my halfway point. The Marr Glacier is an active beast, cracking and calving regularly, spilling iceberg bits into Arthur Harbor. To see a 10 ton piece of ice collapse into water is tremendous - there's nothing to compare it to really. It does cause me to reflect on self-destruction - is there anything more human than self-destruction? There's this David Shields' quote that has really been sticking to my brain:

"We are deeply divided animals: we are drawn to the creation of our own demise. And the more righteous our self-presentation, the more deeply we yearn to transgress, to fall, to fail."

I'm only going to touch on two artists this go round. My brother was the first to turn me on to The Heavy. They're a British funk-rock band, it's gritty stuff. That's not the story though and I know this sounds pompous, but every time my brother calls to tell me about a new band, I've either been into them for a while (The Avett Brothers, Spoon) or I tell him how much that band really sucks (Flobots). That's not the story either, you see six months ago my brother self-destructed and got his third DUI. My own arrogance got me arrested last year at this time for the same thing. Anyhow, he's seriously battled alcohol abuse for years - he's the type that rages til he passes out. He's also been sober for long stretches. So one night during a bad relapse, he'd been arguing with his wife and went outside to sit in his car and blast The Avett Brother's I and Love and You. It was 2 AM, but he wasn't going anywhere, just getting lost in Seth and Scott Avett's words I guess. His wife had had enough with it all and called the police. The first time he noticed the cops was when they knocked on the window to tell him to get out. He tried to roll the window down, but lowered the wrong window instead. Mandatory minimums, the judge and state laws didn't bend a bit and now he goes to a minimum security facility for 5 months. His first day actually started today. It's a tough break - he has two young kids and I think about him all the time - but for now, he has to keep on keepin on.

Singer/songwriter Vic Chesnutt had been making music for some time - I knew he had some type of serious indie cred, but his name sounded too country for me to stop down and check out his material. That all changed after Chesnutt took his own life on Christmas Day last year. (NPR interview here) He had been wheelchair bound since 1983 after a bad car accident and by his own admission had attempted suicide three of four times since. Chesnutt's songs are unabashedly honest and original - funny, eerie and completely sincere. It's his advice I'm giving.

Because of my location and the tightened restrictions on downloading, I've been trading music between friends much more frequently. Thus, I've been getting into things that aren't necessarily new releases, but are for the most part new to me. Thank you friends for your good ear balls.

download here: http://www.mediafire.com/?nxmyzzgumxd
Emily Wells Symphony 2 & the Click Boom Boom
Jack Penate Let's All Die
My Toys Like Me Sweetheart
Eels Little Bird
RjD2 The Shining Path
Vampire Weekend I Think Ur A Contra
Four Tet Angel Echoes
The Bird And The Bee Maneater
Gonjasufi Sheep
Those Darlins The Whole Damn Thing
Casiotone For The Painfully Alone Hot Boyz (With Dear Nora)
Here We Go Magic Only Pieces
The Heavy Sixteen
Pantha du Prince Stick to My Side
Nina Simone I Want a Little Sugar In My Bowl
Vic Chesnutt You Are Never Alone

Unknown said…
I was the same way with Chestnutt, he does, unfortunately, have a country sounding name. Great looking mix, nice explanation as well.
4/08/2010 9:54 AM

Ryan Dembinsky said…
Wow man, that's about the coolest thing I've ever heard. Cheers for doing some thing something exciting with your life. Seriously.

Also, thanks for the mix and great call on "Little Bird." I just got absolutely hooked on that song on Lala the other day. It's really such a powerful song.

Unknown said…
As a long time Vic fan, check out this insightful blog. Hope you enjoy as much as I have.