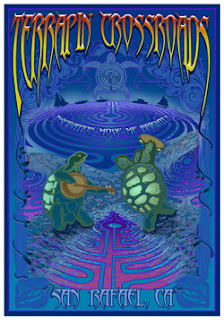 Night two (of three) with our hero Phil Lesh and some of his Friends (Medeski, Scofield, Russo and Warren Haynes).

Set II: Jam > Wharf Rat > Other One > Watchtower, Unbroken Chain, Help > Slip > Eye Sight to Blind > Why Does Love Got to Be So Sad? > Slip > Franklin's Tower

Show notes:
** a.k.a. "It's a Sin" which is an old blues standard not the Zeppelin tune

The second of three nights. I got off work early and got to watch most of Jackie Greene's set. He covered a Tom Waits song (I spaced out and don't recall the title).

First set seemed all over the place. Warren was always slightly off everyone else. Dunno what went awry. He totally butchered Might As Well. The best moments of the first set were centered around a cover of Traffic's Low Spark of High-Heeled Boys. They wove it in and out of the first half of the set and sandwiched it around a jazzed-up Crazy Fingers. The middle part of the set was a little choppy but they finished strong with Loose Lucy and Cold Rain & Snow. I've been on a Lucy kick so it was a tune I actually wanted to hear and Medeski shredded some serious cosmic-funk organ. CRS was juicy because it seemed like Warren finally got his shit together.

Second set highlights happened to be covers... Bob Dylan's Watchtower and Clapton's Why Does Love Have to Be So Sad, which was squeezed into Help > Slip > Frank.  The best guitar interplay between Scofield and Warren happened during the Franklin's Tower jam. Consecutive nights they end on a strong note.

Phil encored with a cover (just like on Friday with Van Morrison) and he also played a second Dylan tune of the evening with Tom Thumb Blues. Mellow way to end the show.

FYI... Sunday's show will be webcast. It's only $7! Check out Terrapin Crossroads for a schedule of future shows and webcast information
Posted by Pauly at 12:34 AM