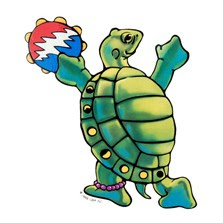 Phil Lesh got together with his friends... Medeski, John Scofield, Joey Russo and Warren Haynes... for a third straight night of jamming Dead tunes and classic covers.

Here's what you missed on Sunday evening...

Jack Greene opened and Mark Karam sat in with him. Jackie played acoustic guitar, banjo and even keyboards. Highlights included Nobody's Fault But Mine, Don't Think Twice, It's Alright, and a silky smooth Brokedown Palace.

For a second night in a row, Phil opened with a Traffic cover. Last night it was Low Spark, but on Sunday he went for Dear Mr. Fantasy. That would be the first of four covers in the first set (versus three Dead songs). Warren belted out the Allman's Blue Sky and the set really picked up some speed. Ramble on Rose > Sunshine of You Love > Cosmic Charlie was my favorite chunk of the first set. Got to hear another Clapton cover and old Slowhand should take some lessons from Scofield, who tore up Sunshine.

Second set opened with a mellow yet soul-lifting and inspiring cover of Leonard Cohen's Hallelujah. Bird Song was at least 20-25 minutes. Maybe I'm over-estimating the length but the Bird jazz jamboree was easily my favorite jam of the night. It morphed into China > Rider and things got a little spooky in the Rider jam out. We heard Dark Star teases all three nights and Phil finally busted it out. WMGGW was a nice treat wrapped inside of Dark Star.

The first two nights Phil encored with covers (Van Morrison and Dylan) but on Sunday he played homage to Jerry himself. Warren's vocals on Stella Blue was bittersweet. Made me miss Jerry. So tragic that Jerry got sucked into a black hole with heroin and never escaped... because if he cleaned up in the mid-90s, then he could be doing something similar to Phil and Bobby by having his own personal venue to jam out with friends. Shit, how fucking awesome would it be to listen to Jerry Garcia play random Dylan covers on acoustic guitar or dick around on pedal steel via a live webcast?

Anyway... it was fun to rock it out on couch tour the last few nights, especially for a low price of $7. I had to work from home so it worked out perfectly that I could catch all three gigs. Plus, I'm on the West coast so the shows ended around Midnight or 1am. I certainty enjoyed this batch of "friends" (anchored by Medeski/Scofield combo) that Phil Lesh invited to Terrapin Crossroads for a medling of musical minds. Can't wait to hear that ensemble again.