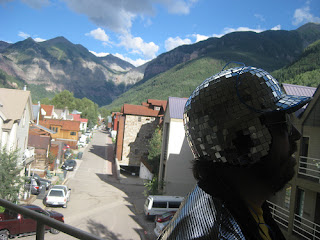 I'll never forget about the Phish Telluride shows. Destination Phish. Nothing quite like it. In 2000, I flew to the other side of the world with Senor and Beno to catch Phish in Japan. And a decade later in 2010, we headed out to picturesque Telluride for a magical two-night run. The Joker and our friends from Denver rented out a couple of condos at the edge of town and we hosted a three-day long party that got out of control quickly. Tons of fun.

I never wrote about the second night of Telluride because it was my 200th show and I was really couldn't find the right words to describe the emotional night. If my memory serves me right, 8/10/10 was an average performance with a noteworthy Mike's Groove with a smoking Crosseyed jammed into the middle. But the entire show I was bombarded of thick juicy memories of the previous 199 shows, specifically almost every friend I had ever seen Phish with spanning back to high school when I caught my first show and leading up to Telluride (with my girlfriend and the Colorado faction of the Coventry crew). Of course, while swimming through the warm waters of my members banks I could not remember a handful of shows because my past had blended together in one long foggy and groggy memory.

Sometimes, it's all just one long Phish show. But Telluride always stands out.

Someday I'll get my shit together and write about the second night in Telluride and the craziness surrounding my 200th show, but this is not one of those times. In case you were wondering, I wrote about the first night in a post titled... Telluride: The Invasion.

We even managed to record a few Wook Patrol podcasts during the Telluride insanity. I re-listened to them and couldn't stop laughing at the hijinks, from Wildo being the bouncer (because he was the biggest out of all of us) to the Joker cussing out a crabby old lady on the Ganjala. Man, I wish we recorded more episodes. So great to hear the shit going on in the background.

Listen to the Telluride episodes of the Wook Patrol Podcast here...


Episode 18: Telluride: The After Party with Wildo (1:38) - Pauly and Wildo survey the bizarre, yet heady scene at the Coventry crew's post-Phish after-party that the Joker hosted in his condo.

Episode 19: Telluride: No Wooks, No Tour Dogs (2:23) - When it started getting late at the after-party at the condo, the Joker went on an aggressive patrol and encountered a wook trying to enter the party with a tour dog. The Joker was not going to have any of that. Listen in as the Joker explains to Pauly what happened.

Episode 20: Telluride: The Ganjala (4:56) - The Joker tells Pauly about his ride on the Gondola, which the locals refer to as "the Gangala." The Joker ran into the only non-herb friendly person in all of Telluride. Hilarity ensues.

Episode 21: Telluride: Late Night Patrol with Jonas and Wildo (1:39) - Party crashers were the biggest concern for the mellow Tuesday after-party. The Wook Patrol was prepped. Pauly discusses the new security set up with Wildo and Jonas.