Phish ends their west coast swing in Los Angeles at the Hollywood Bowl.

Here is the setlist... 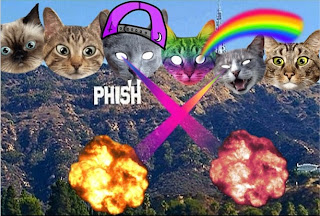 Click here to see every Phish setlist from this summer tour, plus links to vids and recaps.


Episode 9: Hollywood Bowl Traffic Jam (1:46) - While stuck in a huge crowd waiting to cross the street, Pauly chats with Broseph about their encounter with an eclectic cross-section of people at the Hollywood Bowl.

Episode 10:  L.A. vs. S.F. and Sneaking in Fireball (with Leslie) (6:54) - Pauly chats with Leslie the morning after the Hollywood Bowl show. They discuss the differences between L.A. and S.F. crowds, along with her secrets for sneaking Fireball into shows. Plus, Pauly pontificates on why Phish has only done 1 show in Texas in 3.0.

Episode 11: Hollywook Bowl (with Broseph) (4:29) - Broseph tellsPauly about his wookery adventures while angle-shooting inept beer vendors at the Hollywood Bowl.


Check out the Wook Patrol archives and listen to the other episodes we recorded at Tahoe and San Francisco.
Labels: Phish Phish Setlists Phish Summer Tour 2013

Pauly chats with Broseph about their encounter with an eclectic bunch of people at the Hollywood Bowl.
8/06/2013 8:26 AM

The Kids Under the Carpet and the Purple Humpedback Whale said…
Thanks for your assistance Jupiter!

Very appreciated brother!! I will continue to work on patience.... Thank you for sending BGCA #3!!

Chicago Antelope said…
Neither of those links work. You said you are going to post tonight... My patience is working just fine.