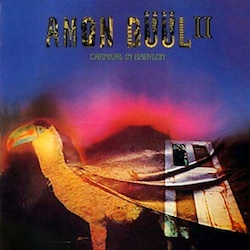 Listening back to Amon Düül II’s fourth LP, Carnival in Babylon, I’m realizing it’s the title by the Munich collective I dial up least often, usually being more apt to pick Tanz der Lemminge or Wolf City (the latter of which we’ll discuss next week).

It’s perhaps the most “conventional” of the four LPs by the group included in Julian Cope’s list of “50 Kosmische Classics” in his Krautrocksampler. That said, anything following the twin peaks of Yeti and Tanz der Lemminge -- both massive double-LPs jam-packed with a seemingly endless supply of ideas -- would seem less ambitious by comparison. And I’m realizing I’ve probably underappreciated Carnival as a result.

After dropping the needle, the first few seconds of the album’s opener “C.I.D. in Uruk” resemble a Zappa segue, leading into an inventive multi-part jam with a group-led vocal giving the track an urgent feel. “All the Years ’Round” follows, featuring a plaintive sounding Renate Knaup-Krötenschwanz leading the group through a surreal political treatise before heavy guitars take over, building into a couple of the louder, more rocking couple of minutes in the group’s oeuvre. Side 1 finishes with “Shimmering Sand,” which features more guitar-heavy calisthenics with some added organ (and more trippy lyrics).

Side 2 opens with “Kronwinkl 12,” by which point the group-chanted vocals reciting blurry complaints and/or worries about the world (“Though I know society is dead brain, I start thinking in circles following their games”) might evoke a Haight-Ashbury gathering. The sweet, bongo-driven “Tables are Turned” adds to that impression, with a heavily-chorused guitar transporting the listener back to the early ’70s. Cope calls “Tables are Turned” the “most loving song” on the album, “a magical, lilting percussive groove” that reminds him of Traffic’s “Vagabond Virgin,” and it’s hard to disagree.

Cope also points out how it isn’t until the last track, the 10-minute “Hawknose Harlequin,” that the band “stretch[es] out into their usual electric trip out,” which is also accurate. In fact, that delightful turn to the experimental doesn’t even really happen until halfway through. The track has a slow, non-threatening build before carrying the listener onto a rocket trip to psychedelia-tinged inner space that fades away much sooner than expected. (Cope suggests the track was originally meant to cover an entire side.)

I’m guessing other Amon Düül II aficionados might overlook Carnival as I have, perhaps because that finish leaves us feeling like something’s missing. It’s a worthy entry to the catalogue, though. Check out the vids below which feature some inspired fan-compiled imagery accompanying most of the tracks.