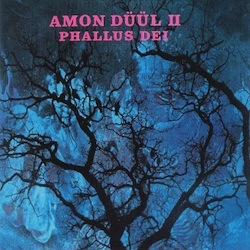 Here’s where it all really starts for Krautrock. That’s right... with God’s Penis.

Soon after the Munich-based commune of artists and musicians known as Amon Düül split into two separate factions in the late 1960s, the one retaining the group’s name began firing off albums starting in 1969 that were largely hastily made captures of free-form live jams. Meanwhile Amon Düül II would be the group producing more polished, better sounding, and ultimately more influential efforts, starting with their 1969 debut Phallus Dei, an LP many point to as the genre-launching “first Krautrock record” with Can’s same-year debut Monster Movie also sometimes challenging for that title.

“Kanaan” comes crashing in to begin the record with a driving beat and exotic feel, a mostly instrumental track save an uncertain reading of the Lord’s Prayer in Greek. The sound recalls early Piper Floyd with a vaguely Eastern vibe added by a sitar-imitating guitar lick.

“Dem Guten, Schönen, Wahren” follows, a rocking song of several distinct parts stitched together that again might at times recall “Interstellar Overdrive” with one chanted section perhaps evoking Freak Out-era Mothers of Invention. The title, meaning “To the good, the beautiful, the true,” belies the less tranquil ritualistic-seeming violence the lyrics describe. Very upbeat in mood, though.

The eight-plus minute “Luzifers Ghilom” coming next starts with some straight-ahead rock interrupted by some cheeky gibberish then surges through another disjointed, highly energetic sequence that includes some very melodic passages punctuated by the shouting of arcane lyrics by lead male vocalist Chris Karrer (including one verse in English). The track includes some wordless wailing by Renate Knaup, the female lead who gets the spotlight for the brief, side-concluding “Henriette Krötenschwanz” in which she sings operatic style over a militaristic snare.

Flipping the disc over, “Phallus Dei” begins quietly with a mix of electronic and acoustic hums and murmurs eventually resolving into another cheerful, well-managed jam with inspired percussion and fuzz guitar, bass, and violin carrying us past the midway point.

Things stop suddenly there, with the group moving in unison through a slower passage before everything gives way to noisy, bongo fury followed by more merry rocking. The crazed vocal -- only coming in during the song’s last third -- intersperses English lines telling of Seraphim choirs howling, a Minotaurus running, and how “they broke my magic stick.” (Nothing specifically about God’s penis, though, as far as I can tell, which is perhaps for the best.)

A dreamy, melodious penultimate sequence follows, with yet another, different chord sequence finally marching us into the fadeout groove, suggesting the song doesn’t really end there, but given the limits of vinyl we’re forced to turn away.

More satisfying than their communal counterpart’s Paradieswärts Düül, Amon Düül II’s Phallus Dei is pretty much a delight from start to finish, with better musicianship and many more ideas. When reviewing this one among his “50 Kosmische Classics,” Julian Cope overstates the album’s avant-garde leanings (“At first the music is unfathomable”) in my opinion, as this is plenty accessible even on a first listen, and rewarding thereafter as well. That said, there’s even better Amon Düül II to come.

This is a great test blog! I personally love it and find that it!
poker online , judi poker