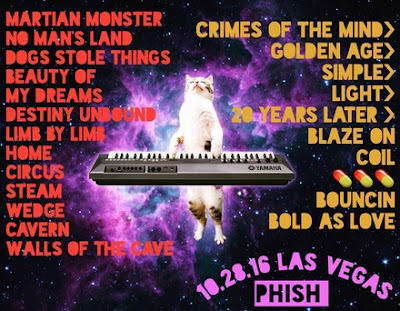 Phish arrived in Las Vegas for a four night run at the MGM Grand Arena. Last time Phish played Vegas in 2014, they kicked off the run with Halloween and ended their tour with the fourth night. This year, the Phish will cap off the tour and the Vegas run with the Halloween show.

The Vegas run will be webcast over at LivePhish.com. I'm sure the guys at Terrapin Radio will have bootleg'd audio streams.

just in case u missed out https://we.tl/tRc0SDsVbm

He can go about his business...move along.

THANK YOU for the early droids. Regretting not waking up in Sin City right now, this eases the pain a little, at least.

Thanks much. Always appreciated.

Thanks guys for the links, as always! Any chance we could get a zip DL so as to not have to convert from rar?

how do you convert?

Excellent work with the droids!

This came up as corrupted when I tried to extract. I will keep an eye out for new droids, thanks all the same though!