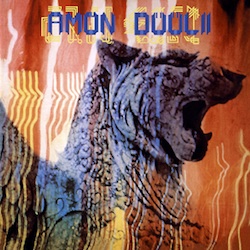 Amon Düül II’s fifth LP -- and the last to be included among Julian Cope’s “50 Kosmische Classics” -- Wolf City moves even further into the more accessible or “commercial” sound of Carnival in Babylon, although only in a relative sense. While featuring a slicker sound and more immediately accessible (and shorter) “song-like” tracks than are found on the group’s previous efforts, Wolf City nonetheless continues in the same, rewarding experimental vein of the group’s earlier output.

The album-starting “Surrounded by the Stars” probably features my favorite Renate Knaup-Krötenschwanz vocal of any Amon Düül II track, particularly when it is double-tracked during the ominous, descending chord sequence of the chorus. Cope mentions Yoko Ono as an analogue -- not inaccurate, although there’s a sweetness here not suggested by the comparison. It is an intense sound, though, signaling some sort of crisis despite the mostly surreal non sequitur-filled English lyrics (“You play your violin on Napoleon’s nose, a cop comes and says you’re one of those”).

“Green-Bubble-Raincoated-Man” is similarly dreamlike, narrative-wise, with Renate this time being backed by a softer, serpentine groove that segues in and out of more freaky jams. “Jailhouse Frog” immediately follows, kicked off by an inspired, repeated lick and that suddenly crashes into some spacey cabaret before concluding with a manic though melodic sax.

The second side begins with the short title track, featuring another head-rocking guitar-based jam with more strange lyrics sung in English (again, as on the previous track, delivered by one of the male vocalists). “Wie der Wind am Ende einer Strasse” (or “Like the Wind at the End of a Road”) is a lower-bpm, nearly six-minute psychedelic instrumental march underpinned by synth, timpani, and tablas with Chris Karrer’s violin and Falk-Ulrich Rogner’s organ sailing overhead -- majestic. “Deutsch Nepal” comes next, a driving, anthem-like track featuring unsettling though comic-sounding narration (in German this time) by the mad, “funny Führer.”

“Sleepwalker’s Timeless Bridge” closes the proceedings just shy of the 35-minute mark, starting with a sequence of immensely pleasing passages by the band -- truly soaring stuff, sounding like a soundtrack to some sort of fondly remembered road trip (and great driving music, not concidentally). Then a couple of minutes in a change occurs, and the song becomes a strange, delightful pop song, with the synth again providing a warm, cozy space in which to consider the robin, dragonflies, hobo, and treasure seeker of the indigo sea weirdly floating past.

(That track sequence, by the way, is the most common although differs from some versions. I prefer it, though, because of the satisfying conclusion of “Sleepwalker’s.”)

Cope calls this one “the first Amon Düül II album of all real songs,” but again that’s a bit misleading. All seven of these “songs” have multiple parts that have been cleverly sewn together, each of which could have been extrapolated into their own, separate pieces. In other words, it’s still experimental by most measures, although if you were looking for a less immediately challenging entry point into the Amon Düül II world, Wolf City might well be the best place to start.


Posted by Short-Stacked Shamus at 9:00 PM