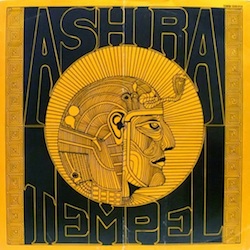 Ash Ra Tempel was guitarist Manuel Göttsching’s first noteworthy band, and a significant contributor to the Krautrock genre as their first four LPs (produced from 1971 to 1973) all made it onto Julian Cope’s list of “50 Kosmische Classics.”

The band would feature different line-ups over its brief life with Göttsching the common denominator throughout their run. Psychedelic guru Dr. Timothy Leary would also surprisingly become part of the Ash Ra Tempel story, a side door we’ll be walking through eventually.

Göttsching would later move on to solo work starting with the stunning 1975 title Inventions for Electric Guitar, plus more group work under the name Ashra (and occasionally reviving the Ash Ra Tempel name). Along the way he’d also hook up with The Cosmic Jokers supergroup whom we’ll be sampling as well in our survey.

This initial incarnation of the band is as a power trio, with Göttsching at the center, Hartmut Enke pounding away at the bass, and Klaus Schulze on percussion. Schulze was another central figure in the Krautrock story, having already been part of the original Tangerine Dream (and featured on their 1969 debut Electronic Meditation). He’d stop by here for this initial Ash Ra Tempel appearance and would return later to take part in the band's fourth LP Join Inn (which we’ll also be discussing). Meanwhile he'd deliver a lengthy, prolific solo career that would elevate him to the status of an electronic music pioneer.

Cope’s description of “Amboss” is a riot, describing Schulze playing “drums like a hundred drummers,” Enke hitting “his Gibson bass the way only a giant could,” and Göttsching playing “blues like Clapton, but right alongside preemptive Keith Levine white noise and egoless as Lou Reed’s Live 1969 rhythm guitar freakouts.”

There is something remarkable about the blending of the three into a unified, rhythmic and melodic noise machine built for speed, each member distinct throughout though never disconnected from the others as they blitz along together from disc’s outer to inner edges. Contemporary associations will inspire thoughts of Zeppelin or Hendrix or perhaps other space rock acts of the day, while in retrospect we can occasionally recognize post-punk, metal, no wave, noise music, industrial, and other, later subgenres.

Make no mistake, though -- this is Rock with a capital “R,” and a maximum, utterly satisfying dose of it at that.

The second side-long track, “Traummaschine” (or “dream machine”), is a proto-ambient, 25-minute long opus that begins in an initially soothing mood (especially after “Amboss”), though swiftly turns ominous.

The trio methodically pins the listener down under the weight of heavy, vibrating strings, heavily echoed electronics, and a wordless vocal, leaving plenty of mental space in which to think those thoughts typically kept at a distance as we try to negotiate our individual, quotidian paths.

The sound becomes sparser as the track goes, with segments of percussion, heavily-reverbed guitar, rumbling bass, and other uncanny tones bobbing along the surface at irregular intervals as it goes before finally trickling off into the inner groove.

Easily a top tier Krautrock entry in the instrumental category, and a remarkable debut. For Krautrock acolytes, Ash Ra Tempel is more than worthy of repeated worship.

Posted by Short-Stacked Shamus at 8:23 AM