Someone gave me Valium just before sunrise. A nap is always clutch during a multi-day Vegas bender, but I slept through the first batch of Saturday morning 9am kickoffs and missed the opportunity to bet on a couple of college football games including the Michigan State game. My drug habit was impacting my gambling problem. I must be back in Vegas. 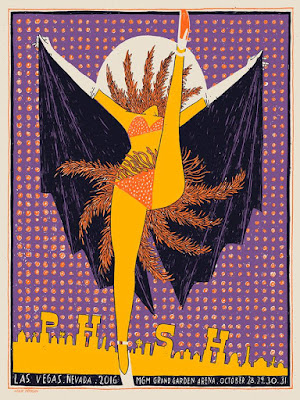 The cocktail waitress, once hot as fuck in 1989 but two decades past her prime, stumbled through the maze of Sex in the City slots. Like a robot, she mechanically went through the motions of delivering watered-down drinks while humping the tail end of the graveyard shift on the Strip. She revealed a quiver of sincerity and looked pleasantly surprised when I tipped her another red bird after she dropped off a third Malibu and pineapple juice since I sat down.

She said those three words three million times, but the lilt in her voice inspired by the $5 tip suggested she really meant it.

I sat alone. Pai Gow. Played heads-up against a five-foot dealer from Hong Kong named Ming. My hand plus the Dragon Hand. I popped a Vicodin and swigged the Malibu in almost one gulp. I glanced at my phone. 7:20am. Friday morning in Vegas. Depending on your outlook on life... I hit rock bottom, or I reached the top of Everest.

I kicked off my first morning in Vegas like I used to do when I lived there. Old habits are hard to kill like the cockroach that will never die no matter how many times you stomp on its back. The Friday night show was highlighted by a sizzling Golden Age jam that worked everyone up into a collective orgasm. I walked down the Strip with Johnnie Salami all the other freaks at 4am, still dosed out and super-sparkly. Just before sunrise, I popped a Valium and passed out for a couple of hours. Those blackout curtains at the MGM worked like a charm. When I finally woke up on Saturday morning, I realized I missed the early morning college football games. I kept telling everyone I knew to bet on Michigan State. Those rivalry games are always tight. I shoulda bet the game before I crashed, but I made a rookie move.

Spent Saturday late morning swirling in a Valium-haze and playing Pai Gow at the MGM with Johnnie Salami and a trio of Canadians. They were gonna bet the farm on the Buffalo Bills against the NE Pats. Man, I wished I was their hometown bookie. The entire gaming pit on the floor of the MGM reeked of dank-ass nugs. Most of the civilians in the pits and in the slots ignored the influx of spacekids, pro ragers, filthy rich custies, wookafarians, and tour rats; the slot-junkies simply assumed they for got what day it was and people were wearing Halloween costumes.

The wife (aka change100 in the social media realm) flew into Vegas late on Friday night and skipped the first show. She was thrilled to hear that the boys only teased 2001 on Friday instead of playing her favorite song. We found Johnnie Salami and headed to Wolfgang Puck's for lunch. If we were back on the tour diet of one meal per day, then we had to step up our game a notch. I crushed homemade gnocchi with fennel sausage bolognese... the healthiest thing I put in my body all weekend.

Spent the rest of the Saturday afternoon sweating games in the sportsbook. Everyone stayed loyal and bet on their college squads. Johnnie Salami backed his UW Huskies and the wife threw down cash on Northwestern as a huge dog. Wildo and I couldn't find any lines on Ivy League football, so I bet on Baylor because it was the Joker's school. Meanwhile, in the degen bet of the day, Wildo threw down a four-team parlay with all underdogs (MSU, FSU, Nebraska, and Northwestern). I thought he was wookshit-crazy for making it, but he took my rivalries speech to heart. I lost the price of single Phish ticket on Baylor, but got unstuck when I fired three bets on Auburn (-4.5, -5, and -5.5) and built up a nice profit thanks to Auburn covering by double digits.

Winning a sports bet is one of the top 10 exhilarating feelings in the world; you can only image how hard it is to contain my bulging erection when I rush up to the window to cash my winning ticket. I have to tuck my stiff junk into my waist band so I don't get 86d from the casino for being a pederast, then banned for life in all Nevada casinos by inclusion in the so-called Black Book. It's fun to win a bet, but you can only imagine the intensified rush winning a sports bet while tripping balls in the middle of a Phish show and getting the winning notification at the start of Wingsuit that you shipped your big bet of the day. I got unstuck and planned to roll the college winnings into Sunday's NFL action. I was playing with house money. Time to press it because it's FREE MONEY! Gambling is utterly preposterous and awesome in the same breath. You can create wealth out of thin air trying to predict the future.

CK5's kaleidoscope of lights were replaced by dollar signs and I kept yelling random Kanye lyrics in jubilation to the dismay of the hottie raver-purple unicorn dancing next to me who had no clue why I shoved my swollen crank in my waist band while Trey sang, "Time to put your Wingsuit on!" I huffed a victory doob with the guy in front of me because Wingsuit harshed my old lady's vibe so much so, that she retreated to the hallway to realign her chakras with spinner girls and spun-out wooks. 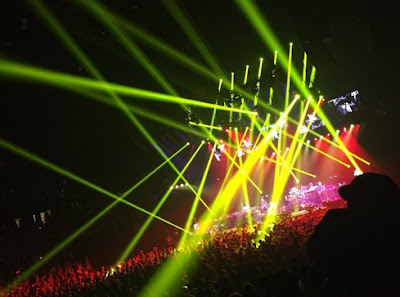 The wife @change100 passed 100 shows in San Francisco this summer, and as a couple we passed 100 shows together at one of the Dick's shows. The second in night in Vegas marked my 351st show. I only mention that because the final show in Coventry was my 151st show. Yup. Your math is correct. Saturday in Vegas equated to my 200th show in 3.0. You know what that means? I lose my jaded vet status and get demoted in rank. Sweet fucking Jebus. 200 fucking 3.0 shows? Talk about chasing the dragon, son!

We had sweet seats a couple rows off the floor. The second I walked inside the MGM Arena, we witnessed a wedding in upper deck before the show started. Back in 2000 just before the 1.0 hiatus, I took my Japanese friends Yuh and Jun (from the Tokyo jamband "Horse") on tour with me and at the Vegas show at Thomas & Mack, we watched a young couple from Texas get engaged in the middle of the first set during Mellow Mood. And now, 16 years later, I saw a wedding in Vegas.

We pre-gamed in my room once again and wouldn't be a Saturday night in Vegas unless I was the guinea pig goaded into testing the mystery baggie. For a second night in a row, Phish kicked off the show with a Haunted House song. The Birds started the Saturday show (side note: bug thumbs up to the hottie who dressed up like Tippi Hendron in Hitchcock's Birds thriller for Halloween). Gumbo was the highlight of the set. Slow boil to start. Faded funk. Exploded into a fucking beast.

Leo stepped to the front of the stage and channeled his best Frank Sinatra for Lawn Boy. Killed it. FUCKING DESTROYED IT. Women fainted in the aisles. Overcome by the sexual radiance. Even I felt something tickle my loins. It was like the Beatles at Shea in 1965, except Leo was distributing the vocal aphrodisiac to the ladies on the highest vibrational scale in the universe. Section 12 was flooded. Ten inches deep. Vaginal secretions squirted in all directions. It was like the friggin' Bellagio fountain over there. Only thing missing was that fancy opera song in Italian. Leo wasn't done. He wanted to let Mike Gordon know who's the BIGGEST swinging dick in Vegas. Leo walked over to Gordo's side and simply gazed at a half dozen ladies. In a split second, Leo snatched up the cream of the crop from Gordon's art-freak fangirls and even lured away a couple of Ed O'B's Radiohead groupies.

Yeah, spun'd. The liquid sunshine definitely kicked in during More. Trey used a Jedi mind trick and brainwashed me for a few hours, but by sunrise, it wore off and I returned to my cynical grumpy self.

At setbreak I found Raging Ruth, who was a hot mess all weekend. She snorted all of my bathroom drugs and pissed off a couple of maids (I dunno how anyone can get Chardonnay stains off stucco ceiling).

Mercury is growing on me. Got weird for a few minutes. Phish gambled on that one. Everyone in my section was crocked to the tits. Most of them tried earnestly to get into it. Erica and John from the Boulder crew got stuck in a non-Mercury friendly zone in Chad City enduring Chadoucheful things during the 16+ minute song. Shit got cooking with Piper. Nine minutes in, it felt like we were attending a Herbie Hancock's basement jam session before the entire got sucked into a worm hole and got sideways alien freaky and blasted off into another dimension. Tweezer wasn't for amateurs. Felt like it was gonna be all sparkles and unicorns and moonbeams, but shit got dark and dirty quick. The boys shifted into nasty mode and quickly left the noobs in the dust. They kicked it up another notch and kicked the ketamine kids in the nuts. Tweezer jam didn't waste any time before it got to the fringes of the Vegas Crazy Galaxy... a.k.a. the third-day of a 72-hour coke-bender with several tear-dropped tattoo Eastern-European working girls hiding in your hotel room on the lam from their Russian mob pimp/boyfriends.

Then Page saved the day with his uplifting new song I Always Wanted It This Way. I was so damn lazy that I dubbed it as Page EDM in my setlist notes. It's like if Page tried to re-write the sentiment of Steely Dan's Hey Nineteen (aging beatnik falling in love with a young hippie) but influenced by James Murphy and LCD Soundsystem's hipster-untz. Horse > Silent was welcomed relief from half the crowd who got lost during Page EDM. The other half raged it hard with Page and his chorus of scantily-clad burners. Golgi was the cherry-flavored line of blow on top of the sundae. The two-song encore was an Exile on Main Street cover plus Tweeprise. I was thrilled that Phish didn't punk out with Loving Cup. I woulda soiled myself if I we got Torn and Frayed, but I gave the boys two thumbs up for Shine A Light.

"That new Page song makes me anxious," said my bud Scotty from LA, as we walked onto the casino floor after the show.

"Yeah. Page EDM makes me really fucking frightened," I said dodging someone with a tourdog in a cape. "Like what would happen if I was all of a sudden single and a 40+ year old having to date a millennial. That would fucking terrify me. This song is about Page having a mid-life crisis and ditching his wife/kids to go to Burning Man and he eats too much gay ninja molly and falls in love with one of those body-painted sparkle ponies, and he's fucking LEO and lives life by his own moral code but he can't connect with her on an intellectual level because she's a tech-addicted millennial and constantly on Snapchat and not listening to him play new songs ideas, just like Trey does!" 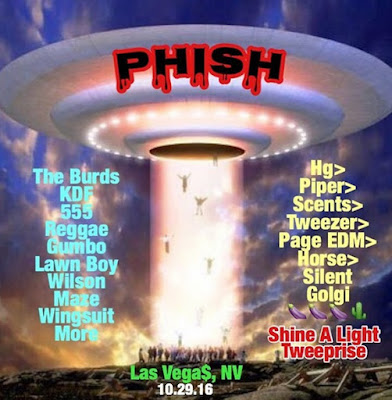 Two down. Two more to go, plus Halloween.

Phish Vegas Part 1: All These Dogs Just Want To Play

Phish Vegas Part 3: The Latch Was Left Unhooked
Posted by Pauly at 4:20 PM

You really are a funny guy.