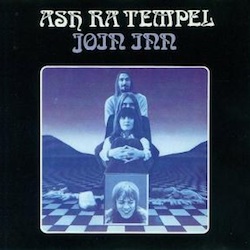 After their sojourn in Switzerland to record with Dr. Timothy Leary, Ash Ra Tempel went back to Germany to the famous Dierks Studio in Stommeln to record their fourth LP, Join Inn, which like others by the band was released on the Ohr label.

The record also signaled a return of sorts for the band to an earlier sound and ethos insofar as it reunited the original trio of Manuel Göttsching (guitar), Hartmut Enke (bass), and Klaus Schulze (drums and synths). Also joining in on Join Inn with a spoken-word contribution on the second side is Göttsching’s then-girlfriend, Rosi Müller.

The recording of Join Inn occurred during breaks from another, more ambitious project, the tremendous double LP Tarot by Walter Wegmüller to which Göttsching, Enke, and Schulze all contributed (also part of the “50 Kosmische Classics” we’ll eventually be covering here).

Like the band’s self-titled debut, this one features two side-long improvisations, starting with Side 1’s “Freak’n’roll,” a stripped down, free form jam perhaps recalling Hawkwind, Cream, or the Dead. (It also echoes early Can, whom we’ll be taking up next week.)

Schulze’s excellent, relentless drumming gets spotlighted, as does Göttsching’s manic rhythm guitar. It’s a sinuous, off-the-cuff seeming exercise without a lot of structure or progression -- pleasant, though not hugely memorable.

By contrast, Side 2’s softer “Jenseits” is a genuine delight, with Schulze’s droning synths providing an aural bed over which Müller quietly delivers her sparse, spacey narration in German. Göttsching’s shimmering guitar begins peeking through starting about halfway through, adding to the surrounding warmth.

The title means “beyond” and the narrative is suitably abstract, evoking in an impressionistic way ideas of childhood innocence and prelapsarian nature. Although the speaker seems fixated on the past, the mood is incongruously futuristic, suggesting a kind of vaguely fearful sci-fi soundtrack rather than a pastoral idyll. It’s one of the better meditative compositions in Krautrock.

Join Inn closed the door on the original Ash Ra Tempel, with Schulze moving on to solo stardom and Enke leaving music altogether. Göttsching would carry the “Ash Ra” name forward through a few different incarnations, starting with a follow-up with Rosi titled Starring Rosi, a much less Krautrock-seeming disc full of structured pop songs.

As I’ve mentioned before, when it comes to later Ash Ra/Göttsching output, do check out his two solo efforts Inventions for Electric Guitar (1975) and New Age of Earth (1976), a couple of immensely satisfying guitar-and-synth instrumental exercises I’d include on my own alternate “best of” Krautrock list.

Meanwhile, check yourself into Join Inn:

Posted by Short-Stacked Shamus at 12:44 PM