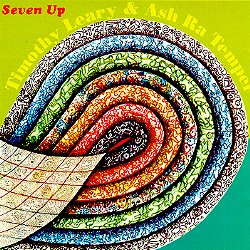 By late summer 1972, Dr. Timothy Leary had been a fugitive for nearly two years.

A countercultural hero, Leary had been advocating the use of psychedelic drugs for personal growth for several years, disseminating his famous “Turn on, tune in, drop out” message via writings and lectures. He was becoming an influential, much-followed guru to many and “the most dangerous man in America” to then-president Richard Nixon and others.

Leary attracted a large enough following to embark on a half-serious run for governor of California in 1970 versus the incumbent Ronald Reagan. His campaign’s slogan was “Come together, join the party,” and in fact John Lennon’s “Come Together” started out as a campaign song for Leary, although ultimately only used the title phrase as a hub of sorts around which to spin the surreal lyrics of the Abbey Road opener.

The campaign quickly halted, however, when Leary was arrested for possession of marijuana -- just a couple of roaches -- and after additional counts were added he was given a prison sentence totaling 20 years. In March 1970 at the age of 49, Leary began his sentence at the minimum-security California Men’s Colony in San Luis Obispo.

Six months later, Leary found a way to leave the facility a bit earlier than scheduled.

“The escape was spectacular,” writes The New York Times in their 1996 obituary. “Mr. Leary hoisted himself to a rooftop and up a telephone pole, shimmied along a cable across the prison yard and over barbed wire, and dropped to the highway.”

Subsequently aided by the left-wing, chaos-creating extremist organization the Weathermen (a.k.a. the Weather Underground), Leary made his way to Algiers where he stayed with Eldridge Cleaver and the Black Panthers who had there established a kind of American government-in-exile.

Eventually Leary found himself under a different kind of “revolutionary arrest” imposed by Cleaver and so left Algiers, hiding out in Switzerland where he remained for a while before moving to Afghanistan. It was there Leary was finally captured in 1973 and returned to the U.S. He’d serve three more years in a California prison before finally earning his freedom after being pardoned by first-year governor Jerry Brown.

It was during that interim period in Switzerland Leary hooked up with Krautrockers Ash Ra Tempel, collaborating with them along with fellow acid-guru Brian Barritt and several others on the group’s third LP, Seven Up.

Producer Rolf-Ulrich Kaiser, founder of the German label Ohr (means “ear”) for whom Amon Düül, Tangerine Dream, Guru Guru, and others recorded, brought Ash Ra Tempel to a Switzerland studio where they met up with Leary in August 1972 to record the bulk of Seven Up, with some overdubs added later in Germany before the record was released in early 1973. The record’s complicated backstory includes the easy-to-accept detail that much of it was recorded under the influence of LSD, with the title in fact referring to acid-spiked 7-Up soda consumed during its production.

Side 1, titled “Space,” features four distinct songs connected by appropriately “spacey” whooshing effects, with Leary on lead vocals. The songs -- “Downtown,” “Power Drive,” “Right Hand Lover,” and “Velvet Genes” -- are blues-based rockers of varying tempos, and the effect is a little like tuning some sort of weird radio dial, landing on music occasionally amid the hallucinatory fog.

Side 2, titled “Time,” begins in a similarly noisy fashion before dissolving into quieter effects with some spoken narration drifting in and out. There are three tracks listed -- “Timeship,” “Neuron,” and “She” -- although it’s hard to pin down when each begin and end. The vibe is much closer here to other Ash Ra Tempel than is the case on the first side, with Tangerine Dreamer Steve Schroyder’s organ providing a magic carpet upon which Manuel Göttsching’s gentle strumming and other sounds comfortably ride.

Of the four Ash Ra Tempel discs included among Julian Cope’s “50 Kosmische Classics,” Seven Up is the one I dial up least often. The novelty element of Leary’s contribution makes the first side seem a bit gimmicky for me -- interesting initially, but not so much on subsequent listens. The second side is more enduring, coming closer to simulating the kind of drug-induced epiphany being sought so earnestly by those involved, with the white noise washing up over the final minutes actually kind of epic.

All of which is to say, while there’s some obvious historical value here with Leary’s on-the-lam story crazily intersecting with the Krautrock narrative, for true musical transcendence I’d direct you elsewhere among the Ash Ra Tempel catalogue.

Posted by Short-Stacked Shamus at 11:25 AM