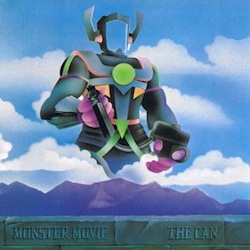 Julian Cope’s list of “50 Kosmische Classics” features works by 20 different artists. From the 20, those unfamiliar with Krautrock have probably heard of Kraftwerk and Tangerine Dream. However, the band more often cited as a seminal starting point for the genre is probably the Cologne-based group Can who has no less than five albums on the list.

The original group was formed in 1968 and consisted of an eclectic line-up with an impressive pedigree. Irmin Schmidt (keyboards) and Holger Czukay (bass) formed the group’s core, both having studied under electronic and experimental music pioneer Karlheinz Stockhausen. One of Czukay’s students, Michael Karoli (guitar) of Bavaria, was also part of the original line-up, as was Jaki Liebezeit (drums) of Dresden whose background was free jazz and mathematics. Rounding out the original quintet was a black American sculptor dodging the draft in Germany, Malcolm Mooney, who would be the group’s original vocalist.

Can’s primary output consists of 11 studio albums released from 1969 through 1979, with additional compilations filling out the discography along with a reunion album in 1989 and other ephemera. That first decade is usually split into three distinct periods -- the “early” titles with Mooney (featured on the debut Monster Movie and a couple of tracks on the compilation Soundtracks); the “classic” middle period featuring Japanese vocalist Damo Suzuki (also on Soundtracks, as well as Tago Mago, Ege Bamyasi, and Future Days); and the half-dozen albums of the “late” post-Suzuki period starting with Soon Over Babaluma and ending with Can.

The five albums we’ll be discussing all come from the “early” and “classic” periods, although I’m a big fan of the “late” titles, too, marked by a lot of inventive instrumentals and even ambient moods. First up is the debut, Monster Movie, which thanks to Mooney’s involvement is somewhat distinct from every other Can album, although sews many seeds later harvested by the group’s relentless experimentation.

Mooney actually is said to have named the group. He would subsequently say it was originally meant as the verb (as in “I can do it!”) although later would come visual puns such as the can of okra on the Ege Bamyasi cover. Later on, explained Mooney in an interview, others took it as an acronym standing for communism, anarchy, and nihilism.

Mooney is a little like the Syd Barrett of Can, in a way, having been there at the start only to disappear and not be part of the band’s greatest triumphs. In fact Mooney was described as having had a nervous breakdown of some kind that led to his leaving the band (a story that has probably been exaggerated somewhat over the decades).

Mooney didn’t become a rock casualty like Barrett, though, and in fact made a surprising return to be part of the 1989 reunion album, Rite Time. In any case, Mooney’s contribution to Monster Movie is significant, with his energetic, earnest vocals helping unify the memorable sound of the group’s hard-rocking debut.

From the start the band adopted a recording technique that involved a lot of improvisation and jamming, with sessions captured live on a two-track machine then via post production edited down into readily-consumable album tracks.

The most immediate analogue for Monster Movie is the Velvet Underground, particularly “Black Angel Death’s Song” and “European Son” (from The Velvet Underground & Nico) and all of White Light/White Heat. Indeed, it’s hard to imagine anyone familiar with the Velvets’ first two albums not thinking of them when hearing Monster Movie for the first time.

Side one features three cuts, starting with the urgent, hard-driving “Father Cannot Yell” that relentlessly pounds away from start to finish with Mooney talk-singing over top, a song that also makes me think a little of early Beefheart (the long form stuff). Next is “Mary, Mary So Contrary,” a slower jam based around the nursery rhyme and Karoli’s intense guitar gradually building to a crazed climax. The side closes with the brief rocker “Outside My Door” with Mooney’s harmonica hook cutting through an exhilarating garage-psych sound.

The 20-minute improv “Yoo Do Right” that comprises all of the second side is said to have been culled from a six hours’ worth of recording, which given the group’s experimental underpinnings isn’t hard to believe. The VU affinities are strong in this percussion-heavy track featuring mantra-like, repetitive lyrics. The organ fading in and out of the mix also makes the track sound even more like a not-too-distant relative of “Sister Ray.”

Monster Movie’s influence on later Krautrock -- not to mention punk, post-punk, and other prog to come -- is unquestioned. Of Can’s overall oeuvre, I’m probably more apt to spin the “classic” and “late” titles, but always find the debut refreshing and remarkably prescient whenever I come back to it. Like the best monster movies, it’s scary-good fun in a rollercoastery kind of way.

Posted by Short-Stacked Shamus at 3:50 PM