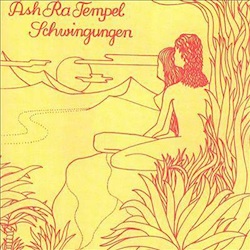 Ash Ra Tempel’s Schwingungen followed the group’s self-titled debut. Like the first LP it was recorded in Stommein near Cologne and released on the German OHR label on which other Krautrock pioneers like Tangerine Dream, Guru Guru, Amon Düül, and Witthüser & Westrupp appeared.

Schwingungen is again marked by free-form compositions recorded live and anchored by the same rock-based guitar-bass-drums instrumentation as directed by leader Manuel Göttsching. The title means “vibrations,” and indeed each of the three lengthy tracks are marked by a kind of constant quivering with raucous tremors rising up at various intervals. In other words, rhythm transcends melody for the most part here, a unifying characteristic of sorts for several other Krautrock acts.

The first side -- subtitled “Light and Darkness” -- begins with the relatively tranquil, six-minute “Light: Look at Your Sun.” Göttsching’s soft and lilting guitars resolve into a bluesy slow march, with new percussionist Wolfgang Müller eventually stepping in to push things forward. Meanwhile guest vocalist John L. does a kind of Jim Morrison-like, half-pleading, half-preaching vocal that eventually just repeats “We are all one” as Göttsching fuzzily rages overhead

Some have identified the song as an homage of sorts to Peter Green’s instrumental “Albatross,” the early Fleetwood Mac single from 1968 that inspired both the Beatles’ “Sun King” and David Gilmour’s soloing style. While “Light: Look at Your Sun” isn’t especially transporting, it is a soothing start, and the affinity with “Albatross” is certainly evident.

The next 12-minute track, “Darkness: Flowers Must Die,” starts slowly with an insistent jaw harp gradually carrying the listener into what becomes an extended, intense freak out driven by bongos and inspired drums, an alto sax idly fluttering overhead, an insistent “Sister Ray”-like rhythm, and (eventually) Göttsching’s phasered soloing.

John L. again contributes an emotional vocal, which to be honest isn’t necessarily a positive for me given the more-than-adequate instrumental chops of the rest of the group. In Krautrocksampler Julian Cope suggests John L. anticipates (coincidentally, name-wise) John Lydon’s later caterwauling for Public Image Ltd. -- a fair association, though the affinity with Krautrocker contemporary Damo Suzuki of early Can is more obvious. The lyrics (in English) are suitably trippy, including talk of a “lysergic daydream,” a “neon forest,” the need for flowers to die, and an earnest desire to turn to stone.

Flip the disc for the 19-minute title track, split into two parts -- “Suche” (“search”) and “Liebe” (“love”) -- and float for nearly 10 minutes along the surface of a mesmerising vibraphone with sparse organ backing and occasional guitar effects, reminiscent of “Echoes” or other early electronic fare. Eventually an insistent drum beat heralds the second part, pulling the listener to a state of attentiveness to receive the song’s outro, a warm mix of cymbals, wordless vocals, and psychedelic strumming and drumming.

I’m more apt to dial up the debut (or Göttsching’s Inventions for Electric Guitar which to me is a big omission from Cope’s “50 Kosmische Classics”) than this disc, although the side-long “Schwingungen” is probably one of the more satisfyingly meditative instrumental tracks in Krautrock. (Start at the 19-minute mark below, if you want to play Side 2 first.)

More to come from Ash Ra Tempel, who on their next release strangely find themselves joined in the studio by a certain former Harvard University faculty member turned LSD-promoting hippie guru once described by Richard Nixon as the “the most dangerous man in America.”

Posted by Short-Stacked Shamus at 12:14 PM

Did you know that you can shorten your long urls with AdFly and receive cash for every click on your short links.

Want To Increase Your ClickBank Banner Commissions And Traffic?