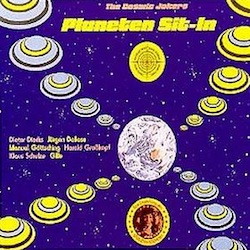 Picking back up this mini-survey of five albums by the Krautrock “supergroup” the Cosmic Jokers -- coming within the larger survey of Julian Cope’s “50 Kosmische Classics” -- the third LP Planeten Sit-In shares more of the same trippy, effects-and-synth laden jamming found on both The Cosmic Jokers and Galactic Supermarket.

Check out those earlier reviews for more about the formation of this group which was never a formal group at all, really, but just a collection of musicians associated with other acts whose improvisations were recorded and then released without their knowledge, promoting them to a level of unexpected importance in the complicated Krautrock mythology.

Unlike the first two records each of which feature two side-long tracks, Planeten Sit-In nominally offers 13 shorter pieces, though again what the listener encounters are two lengthy, uninterrupted sessions stitched together later by the band’s “producers” (and subjects of lawsuits from some of the members) Rolf-Ulrich Kaiser and Gille Lettmann.

“Raumschiff Galaxie startet” kicks off the first side with a lot of intergalactic noise whooshing around your hi-fi. Then some primitive percussion carries the listener to “The planet of communication,” ironically titled given the wordless, effected vocals.

The machines take over momentarily for the short beep-boop-bop of “Elektronenzirkus,” followed by some ominous vibrating of “Der Narr im All,” a track that sounds like you’ve fallen through a trapdoor somewhere halfway through the Floyd’s “Interstellar Overdrive.” “Raumschiff Galaxie fliegt in die Sonne” then starts with Klaus Schulze gradually climbing up the keyboard while a kind of alien funk overlay gets the head bobbin’.

“Intergalactic nightclub” arrives next, heralded by a brief snatch of synth that closely resembles Kraftwerk’s “Morgenspaziergang,” the closing track on their Autobahn LP released later in 1974. (I’m guessing the resemblance is coincidental, making it little matter that the Jokers’ track was recorded at least a year before Kraftwerk’s.) After that opening, the song resolves into a marching piano rhythm and mumbling voice-over that recalls some of the Soft Machine’s rummaging around during latter sections of their 1969 album Volume Two.

“Loving frequencies” then reprises that “Morgenspaziergang”-like theme to start, then crossfades its way through several meditative electronic passages before ending with a disorientingly beautiful piano-bass instrumental to close out the side.

The short “Raumschiff Galaxie saust in die Lichtbahnen” follows, sounding like a sequence of saucers screaming across the sky. Then comes the grand, eight-minute finale, “Der Planet des Sternenmädchens” (or “The planet of the star girl”) -- an epic, sprawling freak out sharing all of the group’s more significant findings brought back from its many voyages.

Cope singles this LP out as especially “weird” compared to other Cosmic Jokers’ output, though to me it sounds of a piece with the first two records especially (with the fifth Gilles Zeitschiff collaboration much stranger). Sit in and listen and decide for yourself: