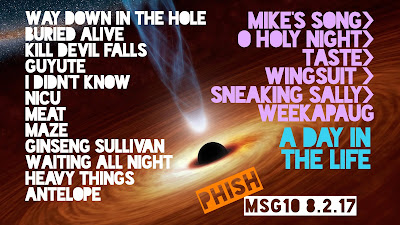 Get your heady holes and lube ready! Night 10 is finally here. Never miss a Wednesday show with an even digit on a month beginning with a vowel. Phish returned for its 10th night of their Baker's Dozen.

The remainder MSG run will be webcast at LivePhish.

Here's what you missed on Wednesday....

E: A Day in the Life 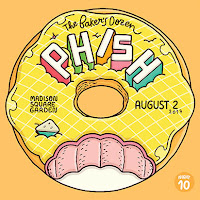 Wednesday Donut: HOLES... Night 10 Schwilly City all around. Easy to spot heads who did all 10; they had the zombie-wook 4,200-yard stare and had conversations with invisible entities... Pre-party jam session on UWS with two musician friends. Cincy Deadhead crew raged their second show in a row... My Israeli friend G attends one Phish show a year with me. He went weekend 1, had so much fun, that he asked to come again! He loved the dark jams and picked out The Wire cover opener from the first lyric... My section crunk'd. Milesandra from GOT lookalike snuck in fifth of Hennessy with molly bumps chaser. She got a girl from Montana rolling solo next to me schwilly by mid-set. Those two became besties by setbreak... Buried Alive fit the gangster hole theme... Fish vac solo on I Didn't Know... Fishman fucked up Meat segment and made the band play it again with him. He nailed it second time... CK5's Maze lights always a mindfuck... Waiting All Night for some dank jammin' mon!... Entire crowd waiting for a roof-buster. Antelope to the rescue!... Mike's second jam. That's all you need to know... Milesandra offered me a bump at start of Mike's. I asked her what it was. She said, "K." I joked, "Is it Gluten-free?" She called me a pussy and told me to do it. I politely declined. A man in the depths of a 2-week bender needs some boundaries. Besides, I didn't want a shadow monster to burst out of her vag and shank me in the middle of Sneaking Sally... Didn't expect O Holy Night. You could pick out the goys. They were the ones singing along. Got flashbacks from my McCatholic school days... Taste went sideways! I'm loving how they are pushing jams in all directions. Feral ferociousness. Spunout raver girl in spacecat leggings chomped on glowstick, which splattered all over her face like a Pollock painting. I suggested she go to the ladies room to towel off. She kept dancing... Wingsuit lowlight of the monstrous second frame... Anyone who sat down during Wingsuit, jumped up for Sally ass-shaker. Insta-flashbacks of 97 Sally bustout... Dank Weekapug to close the set... Beatles' cover A Day in the Life encore. Holes lyrics got raucous cheer from crowd... Gave a noob-friend of a friend some (REDACTED), which completely enhanced the Phish experience. "I finally know why they call you Dr. Pauly!" he said as he floated out of MSG four feet off the ground... 10 down, 3 to go.

These droids seem to have holes:

Was leaning towards Page, but Argo may be the MVP of this run...

My morning hook up. thanks man.

Thanks so much, Argo. Just got back from a 10-day honeymoon and needing to catch up on these hard. Wife was nice enough to let me listen to some of the first three and a few jams on our XM radio in the rental. You have made my day!

Thanks for your constant droid maintenance. :)

Yup, it was indeed my crusty old laptop. I think nights 1-8 were so hot it just didn't have 9 &10 in it. Stealthily hopped on wife's (DO NOT DOWNLOAD MUSIC) desktop. Grabbed the droids and ran!
You da man Argo! 10 down 3 to go